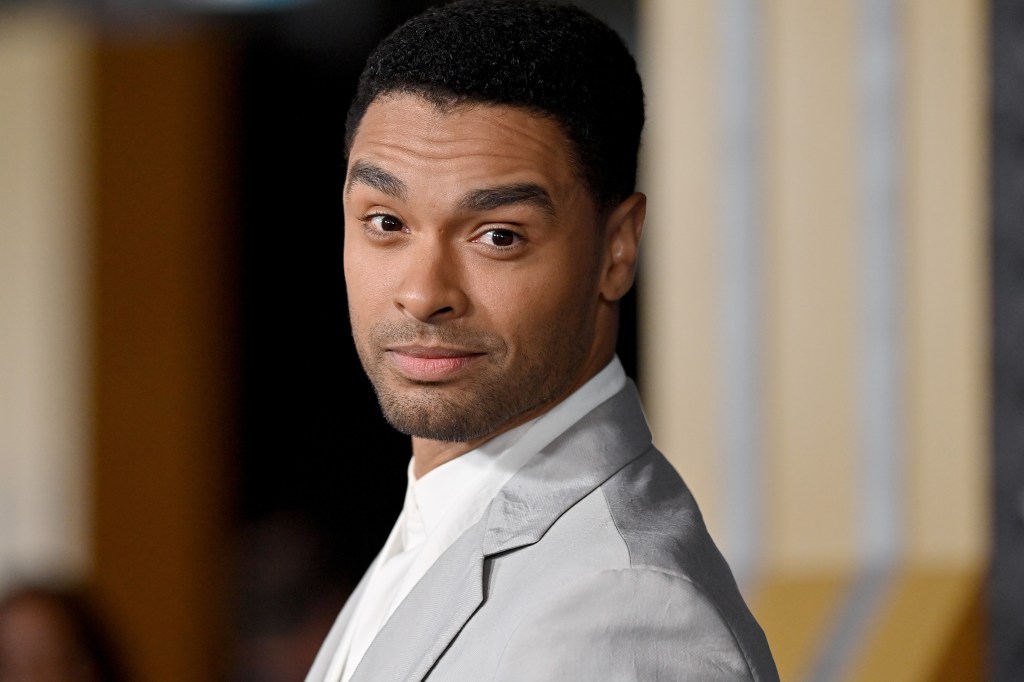 Regé Jean-Page has been voted the most beautiful man in the world by science (Picture: FilmMagic)

Regé Jean-Page – who soared to fame after starring in Netflix’s Bridgerton – has reportedly been deemed the most attractive man in the world.

The 34-year-old actor who played Simon Basset, the Duke of Hastings in the smash hit period drama, was analysed against ancient scientific research and the results proved his face was a real money-maker.

According to the Greek Golden Ratio of Beauty Phi – which measures physical perfection – Regé was found to be 93.65 per cent accurate.

Following hot on his heels was Thor’s Chris Hemsworth with 93.53 per cent, Michael B Jordan of Black Panther with 93.46 per cent and coming in fourth place, singer and heartthrob Harry Styles with 92.30 per cent.

Explaining how the process works, the professional said: ‘These brand new computer mapping techniques allow us to solve some of the mysteries of what it is that makes someone physically beautiful and the technology is useful when planning patients’ surgery.’

The star captivated audiences as the Duke in Bridgerton (Picture: FilmMagic)

He went on to clarify why the actor nabbed the top spot: ‘Regé won because of his classically beautiful face and gorgeous brown eyes.

‘He had easily the highest score for his eye spacing and the positioning of his eyes also scored highly.

‘His perfectly shaped lips also scored highly and the only mark he got that was slightly lower was for his nose width and length.’

Regé has been tipped to take over as the new James Bond (Picture: Getty Images)

The honour was granted after an ancient method analysed his facial features (Picture: Getty Images)

Do you think Regé deserves the top spot? Comment Now

It came as no surprise the Bridgerton frontman was among the world’s most beautiful faces as he caused viewers to uncontrollably swoon during raunchy scenes with co-star Phoebe Dynevor – who played Daphne Bridgerton.

After a jaw-dropping performance in the romance series, the star has been tipped to swap petticoats and afternoon tea for 007 madness as bookies line him up to be the next James Bond.

The race to find a replacement for the iconic character came after Daniel Craig decided to hang up his gun once No Time To Die was released last year.

Regé quickly led the pack and was thrown into the casting rumour mill with the likes of Harry Styles, James Norton, Henry Cavil and Aaron Taylor-Johnson.

Homework should be banned – it’s taking over my kids’ lives

‘What do you have to do tonight?’ That’s the first question I ask my two kids, aged nine and 14, when they get in from school. Not how they are, or how their day was – but, inevitably, what homework they’ve been given. It’s not something I like asking, but it’s necessary so I can […]

Huge landslip under foundations of new 17 storey block of flats

Locals are worried that the tower block with new flats could end up in the river (Picture: SWNS) Engineers are investigating after a landslip on a river bank – under the foundations of a new 17-storey block of flats. Officials from Clarion House and Bristol City Council are analysing the south bank of the River […]

Psychologist who murdered his mum and stole her money told to pay £100,000

Robert Child benefitted £80,000 from the death of his mother Janice A psychologist who murdered his mother before stealing thousands of pounds has been ordered to pay more than £100,000 or face having his jail sentence extended. Robert Child, from Wirral, Liverpool, was jailed for life with a minimum of 30 years after striking his […]