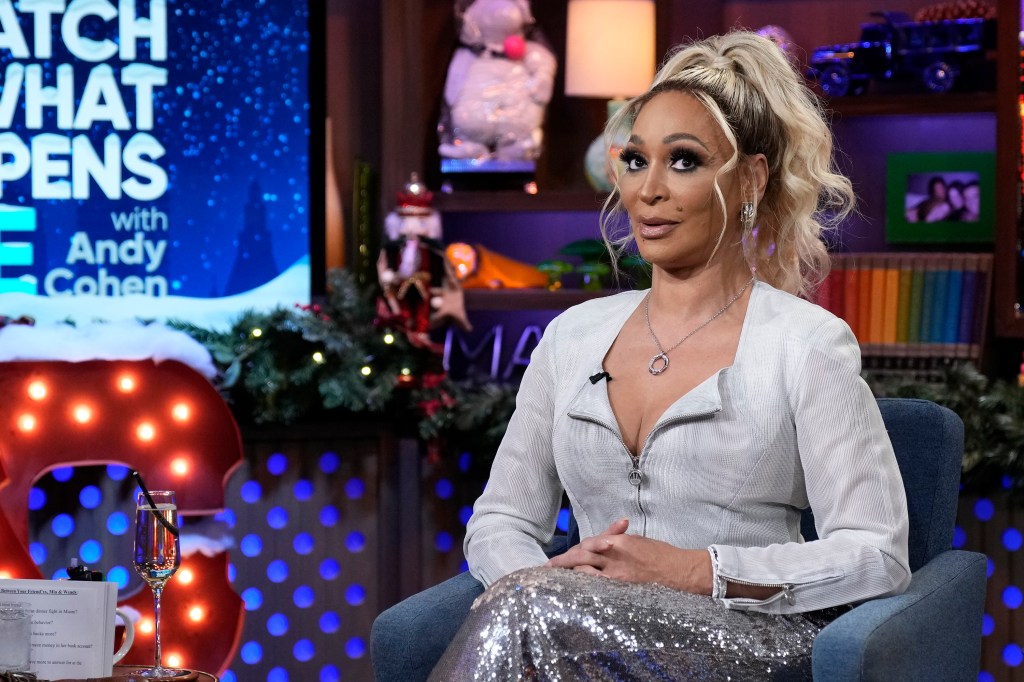 Juan Dixon was having absolutely none of it when he was accused of cheating on wife Robyn during the latest episode of Real Housewives of Potomac.

The couple, who were previously married and share two sons, have been preparing for their upcoming wedding for the last few years, after getting engaged in the season five finale in 2019.

There have been questions raised ever since about when the pair will be walking back down the aisle, but they have yet to share further details on their nuptials.

However, their relationship was thrown back into the spotlight during the seventh series of RHOP, after Karen Huger told Ashley Darby that the basketball coach had been cheating with a woman who resembled herself.

Ashley broke the news to Robyn during a shopping trip, leaving her co-star initially laughing at the speculation.

‘What she said is that Juan has this girlfriend who looks like Karen,’ she said. ‘He’s been dating for years, and that he’s in Georgetown with her all time, they walk down the street holding hands and stuff.

‘She thinks you know about it.’

‘I’ve never heard about that, first of all,’ the Bravo OG replied. ‘Second of all, has she seen that with her eyes?

‘No but a lot of people have seen it and told her about it,’ Ashley continued.

‘If Karen wants to go there and talk about fake, and people doing s**t, we can go there,’ Robyn said while whipping her phone out to contact her beau.

Juan was left raging by the news, telling his fiancée: ‘I’m about to hang up because this is why I don’t like this s**t. Whatever the f**k Karen is saying, Karen don’t know me! I don’t go out!

‘Tell them to cut that bulls**t out! I’m going to cuss one of them f**king women out, Robyn! I’m not f**king playing.

‘I swear to God, I will cuss every last one of them women the f**k out. F**k being nice. I’m not playing. They’re f**king with everything that we’re about.

‘I love you, I appreciate you, don’t let them women get to you, please!’

Things between Robyn and Karen have remained awkward (Picture: Getty)

When Ashley explained that she ‘understood’ his reaction, Robyn replied: ‘[Karen] shouldn’t have opened that can of worms.

‘She really shouldn’t have.’

Speaking in a confessional, she added: ‘It’s clear Karen is in her feelings. It’s so funny because I just knew all that love and support she showed me regarding my upcoming wedding was bulls**t.’

Of course, the drama appears to escalate in the next episode during a sit-down cast lunch, when Karen throws shade at Robyn and Juan for their ‘fake wedding’.

The noise spectrum is full of different colours…but which one works best for you? (Picture: Getty/Metro.co.uk) Could ‘green noise’ be the magic cure to all our sleeping problems? Maybe not completely – but it certainly might help. We’ve all heard about white noise, and then brown noise (a lower frequency sound) came into the periphery […]

There’s more to Principal Weems than meets the eye in Wednesday (Picture: Vlad Cioplea/Netflix) Warning: spoilers ahead for Wednesday season 1. Gwendoline Christie has seemingly hinted Principal Larissa Weems’ story might not be over in Wednesday ahead of season 2 – and we have our fingers crossed that her character may return. In the Addams […]