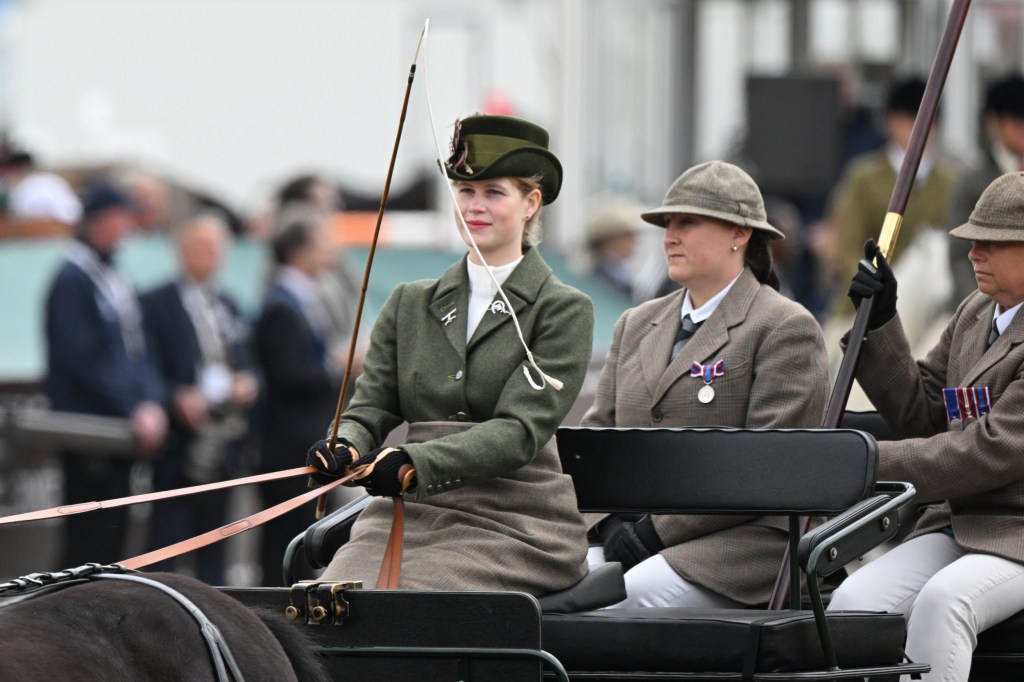 Louise is understood to have inherited her interest in carriage driving from Prince Philip (Picture: Tim Rooke/Shutterstock)

The Queen has been spotted proudly watching her granddaughter drive Prince Philip’s carriage at The Royal Windsor Horse Show.

The monarch looked relaxed and happy as she joined the Earl and Countess of Wessex in the main castle arena to watch their eldest daughter, Lady Louise Windsor, lead the Fell Pony Society centenary parade.

The Queen wore a headscarf navy cardigan for the event and used a walking stick to make her way to the royal box.

The parade was the second event the 96-year-old monarch attended at the equestrian show, which is said to be one of her favourites.

Earlier in the day, she was rewarded when her horse beat other breed champions to be named winner in the Horse & Hound Mountain and Moorland Supreme in Hand Championship.

Her appearance at the show comes after she reluctantly missed the State Opening of Parliament on Tuesday on the advice of royal doctors due to her continued mobility problems.

From the royal box, the family watched excitedly as Louise took part in the carriage display, driving the Duke of Edinburgh’s carriage.

Sophie was seen taking several photos as Louise put her grandfather’s carriage through its paces while Edward stood up to get a better look.

The Queen joined the Earl and Countess of Wessex in the royal box to watch Louise (Picture: PA)

Carriage driving was one of Prince Philip’s favourite past-times, with the duke taking part in races and even representing Britain at several world and European championships.

Louise followed in his footsteps earlier this month when she competed in the British Indoor Carriage Driving Championships.

In May 2017, Prince Philip spoke about how he took up carriage driving when he stopped playing polo at the age of 50.

The Queen was all smiles while she attended the Royal Windsor Horse Show (Picture: Stephen Lock / i-Images)

‘I was looking round to see what next, I didn’t know what there was available,’ he said.

‘And I suddenly thought, well, we’ve got horses and carriages so why don’t I have a go.

‘So I borrowed four horses from the stables in London, took them to Norfolk and practised and thought – why not?’

The Duke was credited with shaping the sport in the UK and was still competing in his eighties.

At the age of 91, he had the dark green carriage Louise used on Friday made to his specifications out of aluminium and steel.

Mikel Arteta fell to yet another defeat on Monday night (Picture: Getty Images) Arsenal’s devastating defeat to Newcastle United on Monday night was their 13th of the season, equalling their record for losses in a Premier League season of this length. The Gunners were abject at St James’ Park in a game they needed to […]

Tom Cruise opens up on powerful reunion with Val Kilmer in Top Gun: Maverick after going head-to-head with Iceman in original film

To view this video please enable JavaScript, and consider upgrading to a web browser that supports HTML5 video Tom Cruise has opened up about the emotional reunion he shared with Val Kilmer in Top Gun: Maverick, 36 years after their characters’ rivalry turned to friendship in the original film. On Thursday night, the red carpet […]

A Pennsylvania mother is suing TikTok after her daughter died while trying a viral challenge she found on the app (Pictures: Tawainn Anderson / Facebook) The mother of a 10-year-old girl who choked herself to death after participating in a dangerous social media challenge has filed a wrongful death lawsuit against TikTok and its parent […]