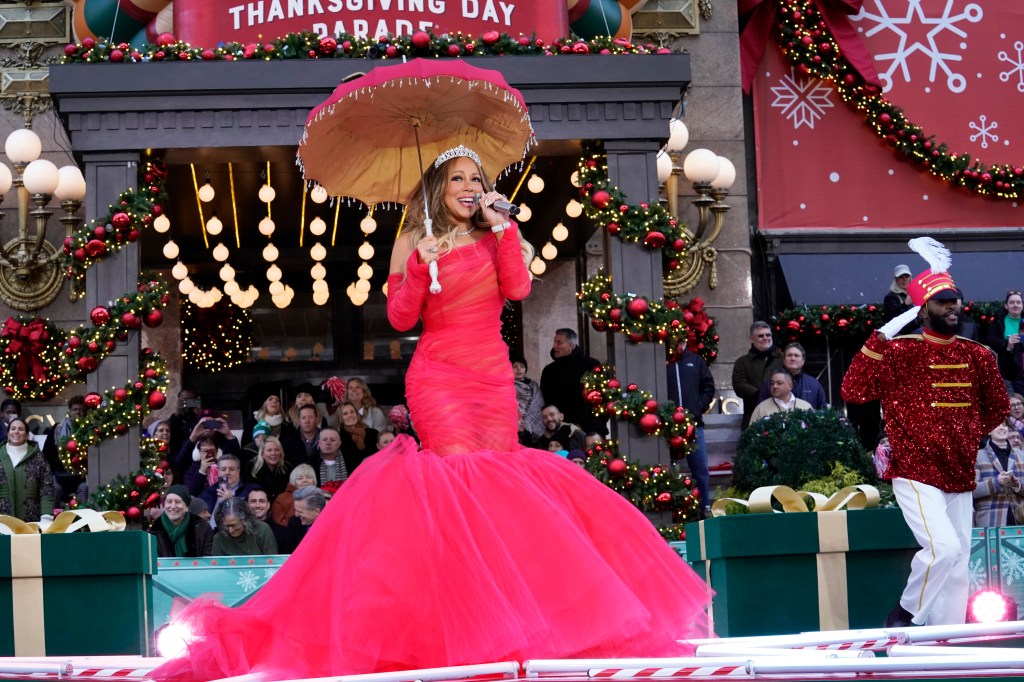 Mariah Carey still puts on a show, no matter which way you slice it (Picture: Cara Howe/NBC via Getty Images)

Mariah Carey continues to be our official Queen of Christmas and her performance at the 2022 Macy’s Thanksgiving Day parade on Thursday is truly a lesson in collecting your fee for doing the bare minimum.

Please note there is no hate here, only bare admiration for our leader.

The singer took centre stage at the event this week, closing out the annual ceremony with a special festive performance of her holiday hit All I Want for Christmas, in front of crowds gathered in the streets of New York City.

Looking her regal best, as per, she donned a bejewelled tiara and a flowing red dress, matching it with a red and gold umbrella – and was joined on stage by her 11-year-old twins Monroe and Moroccan.

Yes, yes, it’s all very sweet and festive, but it was her chilled performance of the Christmas classic, as a smattering of energetic backing dancers twirled and grooved in front of her star-shaped stage, that has tickled punters the most.

Following Mariah’s rendition of the bop, many a punter shared their love for her performance and apparent ability to make bank from standing still and lip-synching.

.@MariahCarey opens for Santa Claus at the @Macys’ Thanksgiving Day Parade with a killer performance of “All I Want For Christmas Is You”! ð pic.twitter.com/trXpKaJAkj

One fan quote-tweeted a clip alongside: ‘Sis lipsyncing a few performances from nov-dec and filling the bag, iconic behavior.’

Ian Hest wrote: ‘Mariah Carey is getting millions right now to just stand there with her umbrella and honestly I’m not mad. Mad respect,’ while Andy Kalmowitz added: ‘Respect to Mariah Carey for not even pretending not to lip sync.’

Just loving the whole vibe, another wrote: ‘Mariah Carey lip syncing in place with this umbrella at 78% energy while her dancers perform like their lives hang in the balance on the Thanksgiving Parade is pure CAMP!!’

The star is our Queen of Christmas (Picture: Noam Galai/Getty Images)

And the shoes! (Picture: Gotham/GC Images)

Now, we must remind you that everyone who performs at the annual parade lip-synchs after John Legend revealed the floats aren’t able to handle the sound requirements, so they perform along to a recording instead. It makes sense. We have no issue there.

The Macy’s parade, known for its spectacle, also featured a star-studded roster of performers including Dionne Warwick, Gloria Estefan, Sean Paul, and Jimmy Fallon and the Roots.

Sharing her merriment at her appearance, Mariah went on to share on social media: ‘Happy Thanksgiving!’

‘Grateful and so proud of my beautiful kids Roc and Roe, grateful for the lambily and for the precious moments in life. Now it’s reaaaallly time!!!’

Cristiano Ronaldo earned a controversial penalty during Portugal’s 3-2 World Cup win over Ghana (Picture: BBC) Ex-Premier League referee Mike Dean believes a technical glitch was responsible for VAR failing to intervene and deprive Cristiano Ronaldo of a penalty against Ghana. The now former Manchester United forward was provided with the opportunity to break the […]

To view this video please enable JavaScript, and consider upgrading to a web browser that supports HTML5 video On Sunday’s episode, the pair partook in The Speak Uneasy, where Mike was presented with a cocktail made up of the disgusting vomit-fruit, which, unsurprisingly, gets its name from its foul-like odour. Luckily for Mike, he was […]