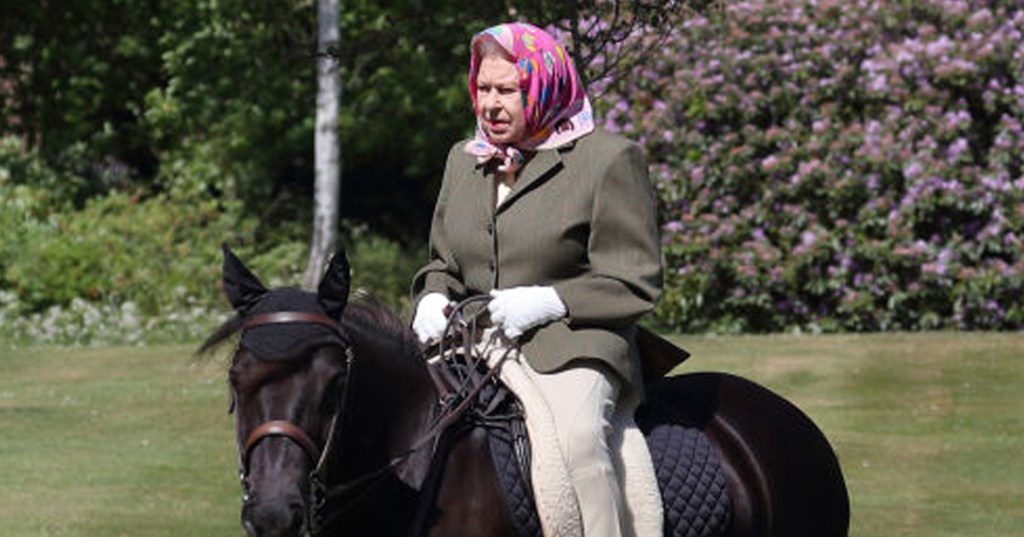 Her Majesty was said to be extremely disappointed when she could not ride (Picture: Getty Images)

The Queen has began horse-riding again, nine months after she was advised not to continue due to health concerns.

Doctors had told the monarch to avoid the activity after she experienced ‘discomfort’ in October.

The news came months ahead of Her Majesty’s Platinum Jubilee celebrations, when mobility issues held the 96-year-old back from attending a variety of events.

But the Queen now feels strong enough to return to the saddle, the Sun has reported.

According to insiders, the royal has been enjoying ‘gentle trips’ around Windsor Castle by horseback.

She had been using a golf buddy rather than horse to travel the estate during her ‘ban’ from horse-riding.

A Windsor Castle source told the Sun: ‘The Queen had missed her riding over these nine months.

“She had been able to whizz around the castle’s Quadrangle in her golf buggy to walk her corgis.

‘Riding again is a wonderful sign after all those worries we had about her health. To be able to do so at 96 is pretty remarkable.’

The Queen’s return to the saddle was briefly referenced during her Platinum Jubilee celebrations.

At the Service of Thanksgiving at St Paul’s Cathedral, the Archbishop of York Stephen Cottrell had said: ‘We are so glad you are still in the saddle and we are all glad there is still more to come.

‘So thank you for staying the course.’

The Queen’s love of horses is said to began when she was just three-years-old.

Her first reported riding lesson took place on a Shetland pony in the private riding school at Buckingham Palace Mews in January 1930.

She went on to become a firm fixture at the Royal Ascot Races and the annual Windsor Horse show.

The monarch’s love for the equine world is something she shared with her mother and she has been breeding and racing horses for more than 60 years.

Thoroughbreds owned by the Queen have won four out of the five flat racing classics – the 1,000 Guineas and 2,000 Guineas, the Oaks and the St Leger – with only the Derby eluding her.

Princess Elizabeth feeds a horse in the grounds of Windsor Castle in 1944 (Picture: Getty Images)

The Queen’s horses and ponies, which number around 180, are kept at various royal residences and stables from Sandringham to Balmoral.

The Queen’s cousin Margaret Rhodes, interviewed a number of years ago for a BBC documentary about the monarch’s passion for horse racing, said: ‘You see I think that early on, when she became Queen, I think that she had to sacrifice within herself an awful lot of emotions and thoughts of the future and everything else.

‘But I think with …read more

Home Secretary Priti Patel vows to carry on with deportation flights to Rwanda after a last minute intervention by judges in Strasbourg (Picture: PA) More than 400 people crossed the English Channel on the day the first Rwanda flight was cancelled in a humiliating blow to the government. Eleven small boats were intercepted on Tuesday […]

The rolling walkouts will add to the huge backlog of cases stuck in the court system (Picture: LPN/REX/Shutterstock) Courts could grind to a halt next week after barristers voted to go on strike. The Criminal Bar Association (CBA) said its members in England and Wales will walk out over a dispute about legal aid funding. […]