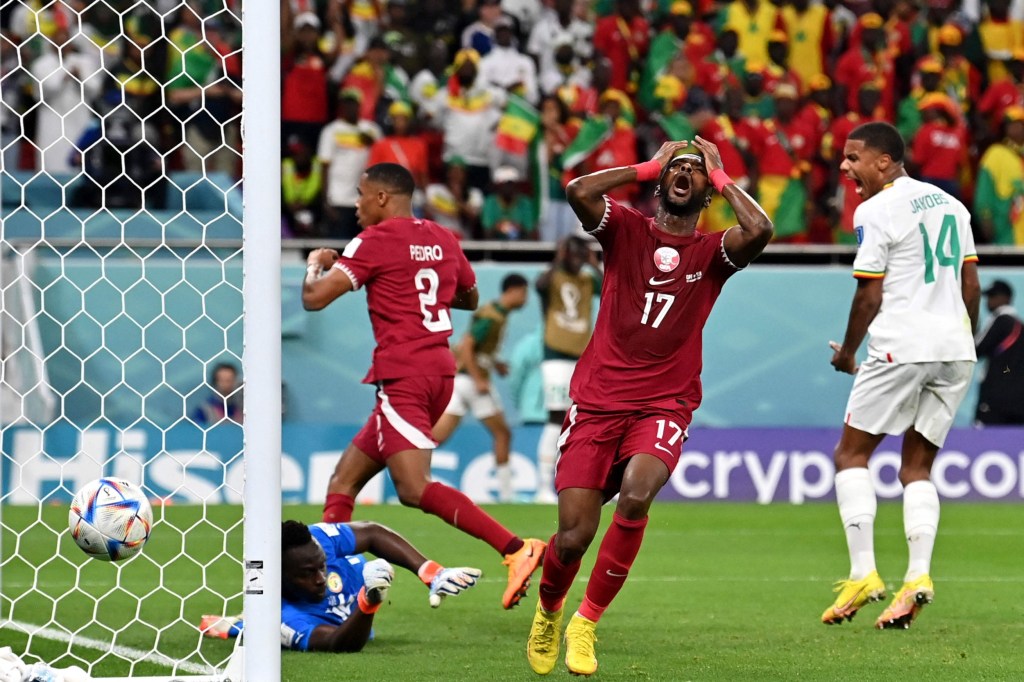 Host nation Qatar have crashed out of the World Cup after just two games (Picture: Getty)

Qatar are officially the worst ever World Cup host nation, becoming the first team to stage the tournament and crash out after just two games.

While much of the debate around the Gulf state’s suitability to stage the biggest sporting event on the planet has centered on their human rights record and archaic LBGTQ+ laws, their footballing heritage, or lack thereof, has been largely overlooked.

After losing their first game against Ecuador on Sunday, where they failed to muster a single shot on target, Qatar fared slightly better against AFCON champions Senegal on Friday but eventually succumbed to a 3-1 defeat.

Appearing at their first ever World Cup, the writing was on the wall once Famara Diedhiou headed Senegal into a 2-0 lead shortly after half-time.

Mohammed Muntari did, at least, create a small slice of positive history when he reduced the deficit with 12 minutes remaining and scored Qatar’s first ever World Cup goal.

Their joy, however, was short-lived when Bamba Dieng fired home just six minutes later to confirm Senegal’s victory and prolong their involvement in the competition while also allowing Africa to celebrate its first victory.

‘Finally a win for an African team at the tournament,’ former Chelsea and Ivory Coast legend Didier Drogba told the BBC.

‘But I would have loved to have seen more goals from Senegal. They stopped attacking at 2-1 and maybe this can cost them qualification later, who knows.

‘It’s in the balance for Senegal, I don’t think they played really well today but a lot will depend on how the Dutch team do against Ecuador.’

Senegal will have their fate in their own hands against the South Americans who drew 1-1 with Netherlands at the Khalifa International Stadium in Doha.

The game hadn’t even properly begun before Claudia Winkleman already eradicated two contestants from new BBC One show The Traitors. The murder mystery reality show looks to be terrifying, nail-biting and already has us hooked, as 22 contestants move into a Scottish castle, and take on challenges to try and win £120,000. The catch? Half […]

A small jar of white powder and a pouch of Alok tobacco were inside the gift box (Picture: Callum Baker/SWNS) A couple who bought a gift box from Poundland were shocked to find it already had something inside – and not something they wanted. Callum Baker, 21, and Lily Tomlinson, 20, had bought gift boxes […]

James Whale, pictured with his wife Nadine Talbot-Brown, has opened up about his cancer (Picture : Nils Jorgensen/Shutterstock) TalkTV host James Whale has opened up about living with terminal cancer. The presenter, who has cancer of the brain, spine, kidney, and lungs, gave a heartbreaking speech at the Curry Awards, saying: ‘I know a lot […]