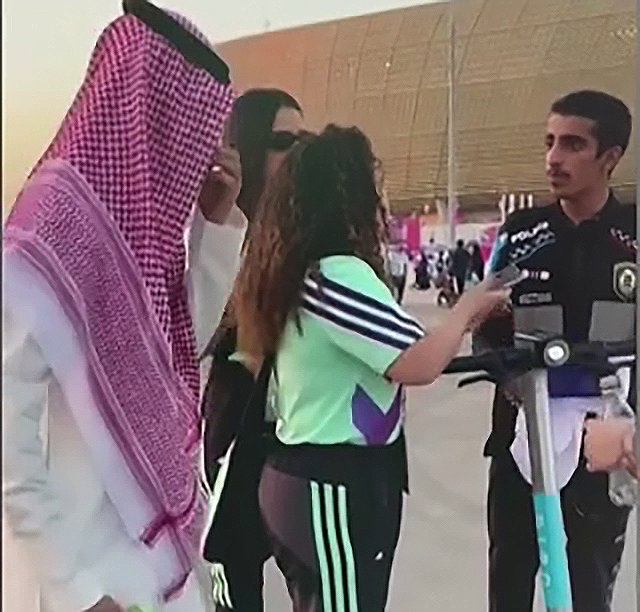 Two Brazillian football fans had their home state’s flag confiscated by Qatari authorities after they confused it for an LGBTQ+ colours.

The shocking incident took place outside of the Lusail Stadium on Tuesday as fans were leaving the ground after Saudi Arabia’s shock win over Argentina.

Video footage shows the moment the women were approached by Brazilian journalist Victor Pereira who asked for a photo with the Brazillian flag.

The brightly coloured flag was that of the northeastern state Pernambuco, which the journalist recognised outside the ground.

Pereira asked another person to take the picture and paused to look at the photo when a man wearing a traditional white dress approached the group and hassled them over the flag.

The individual took the flag, threw it to the ground, and then stepped over it.

Homosexuality is illegal in Qatar and punishable by prison.

The two women had their flag removed from outside of the stadium (Picture: @ovictorpereira)

In the video one man approached the women and seemingly reported it to officials (Picture: @ovictorpereira)

Journalist Victor Pereira (right) spotted the women with the flag and asked for a photo with them (Picture: @ovictorpereira)

MORE : Faces of some of the thousands of migrant workers who died since Qatar got World Cup

MORE : England fan gets his own Qatari outfit complete with St George’s Cross

Pereira told Reuters: ‘I took my phone to record a video but he grabbed it from my hand and said he would only give it back if I deleted the video.’

‘Then an officer arrived and tried to intervene. He grabbed the phone from the other guy and ordered me to delete the video.

Pereira said he obeyed to make sure he would get his phone back as he uses it for work. His case made the news after he uploaded a new video on Twitter relaying what happened.

Volunteers working outside the stadium apologized to him.

He said: ‘They said that they had no right to have done that and that, if I wanted, I could report it.’

Pereira added that surveillance cameras in the vicinity captured the incident and that he was planning on filing a report.

The Supreme Committee for Delivery and Legacy, Qatar’s World Cup organizers, did not immediately respond to a request for comment, nor did the Qatari government’s media office.

The women got into a heated debate with security (Picture: @ovictorpereira)

The Pernambuco state s flag was first adopted in 1817 when it obtained its independence from Portugal (Picture: Getty Images/iStockphoto)

It isn’t the first time LGBTQ+ flags have been removed in Qatar (Picture: @ovictorpereira)

Oti Mabuse would ‘never say never’ to I’m A Celebrity: ‘If it feels right then I’ll do it’

Oti would ‘never say never’ to I’m A Celebrity in the future (Picture: WireImage) After making her mark as a solid fan favourite during her time on Strictly Come Dancing, Oti Mabuse revealed that she wouldn’t pass the opportunity to appear on I’m A Celebrity…Get Me Out of Here!. Since waving goodbye to the flagship […]