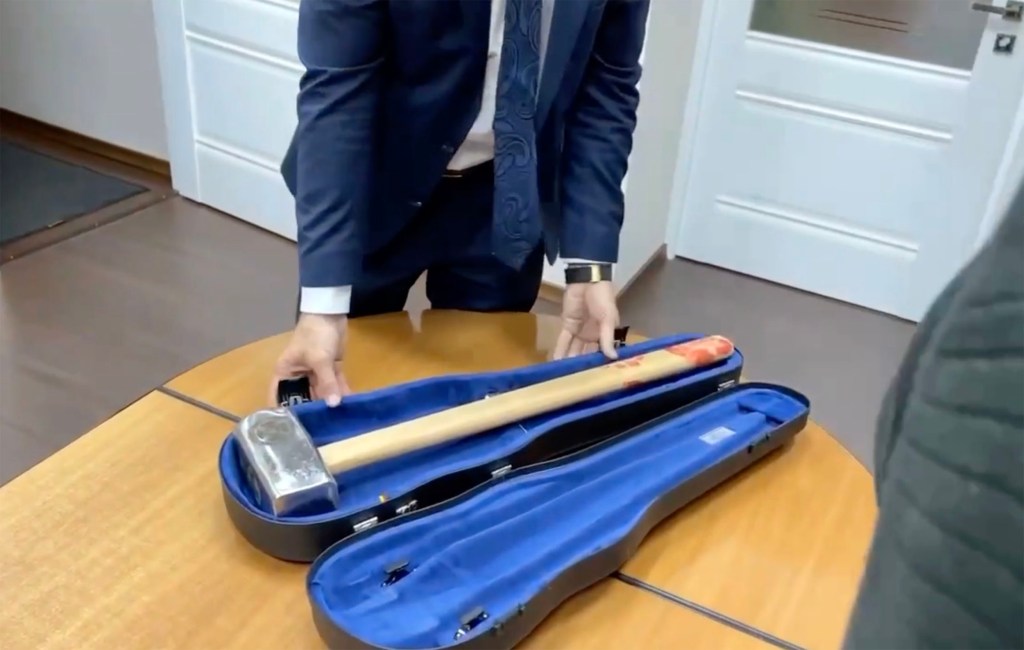 The sledgehammer covered with fake blood was carried in a violin briefcase (Picture: e2w)

The Kremlin-linked boss of the brutal Wagner Group claims to have sent a bloodied sledgehammer to the European Parliament.

Vladimir Putin’s close confidant Yevgeny Prigozhin was responding to a vote to declare Russia a ‘state sponsor of terrorism’ and his mercenaries a ‘terrorist group’.

Smeared with artificial blood, the metal weapon bears the logo and the name of the Russian private military company, and was delivered in a violin case.

The oligarch has used the war in Ukraine to establish himself in Russian politics, after his company first appeared in the country in 2014, where it participated in the annexation of Crimea.

His sickening stunt relates to a video of a former mercenary who was executed with a sledgehammer blow to the head after changing sides during the invasion.

The man, who gave his name as Yevgenny Nuzhin, was shown with his head taped to a brick wall.

The 55-year-old claimed he was abducted in Kyiv in October and came around in a cellar.

The @Europarl_EN is under a sophisticated cyberattack. A pro-Kremlin group has claimed responsibility.

Our IT experts are pushing back against it & protecting our systems.

This, after we proclaimed Russia as a State-sponsor of terrorism.

‘I got hit over the head and lost consciousness and came around in this cellar,’ he said. ‘They told me I was to be tried.’

Moments after, an unidentified man behind Mr Nuzhin smashed a sledgehammer into the side of his head and neck.

The tied-up victim can be seen collapsing onto the floor as the man delivers yet another blow to his head.

The video was posted on a Telegram channel, previously connected with the Wagner Group, under the title ‘The hammer of revenge’.

Asked to comment, Mr Prigozhin said in remarks released by his spokesperson that the video should be called ‘A dog receives a dog’s death’.

Visitors gather outside PMC Wagner Centre during the official opening of the office block in Saint Petersburg, Russia (Picture: Reuters)

The oligarch posted about the sledgehammer, which he wants to be presented to MEPs.

He said: ‘I don’t know what law the European Parliament is guided by.

‘But according to our legislation, from today we declare the European Parliament dissolved.’

The sledgehammer was given by his lawyer to a representative of a pro-Russia channel CYBER FRONT Z supposedly to be sent to Strasbourg.

It is yet unclear if his so-called ‘gift’ has been received by MEPs, but the video was circulated on social media as the European Parliament’s website was hit by a cyberattack by a pro-Kremlin group.

Ticketmaster and Live Nation should be broken up after Taylor Swift chaos, US lawmakers say

Jo O’Meara is back in hospital following struggles with back pain (Picture: ITV) Jo O’Meara is really feeling the love after heading back into hospital. The S Club 7 star recently shared that she’s been in her ‘worst pain yet’ despite believing she was ‘on the road to recovery’. Jo, 43, has previously spoken about suffering […]