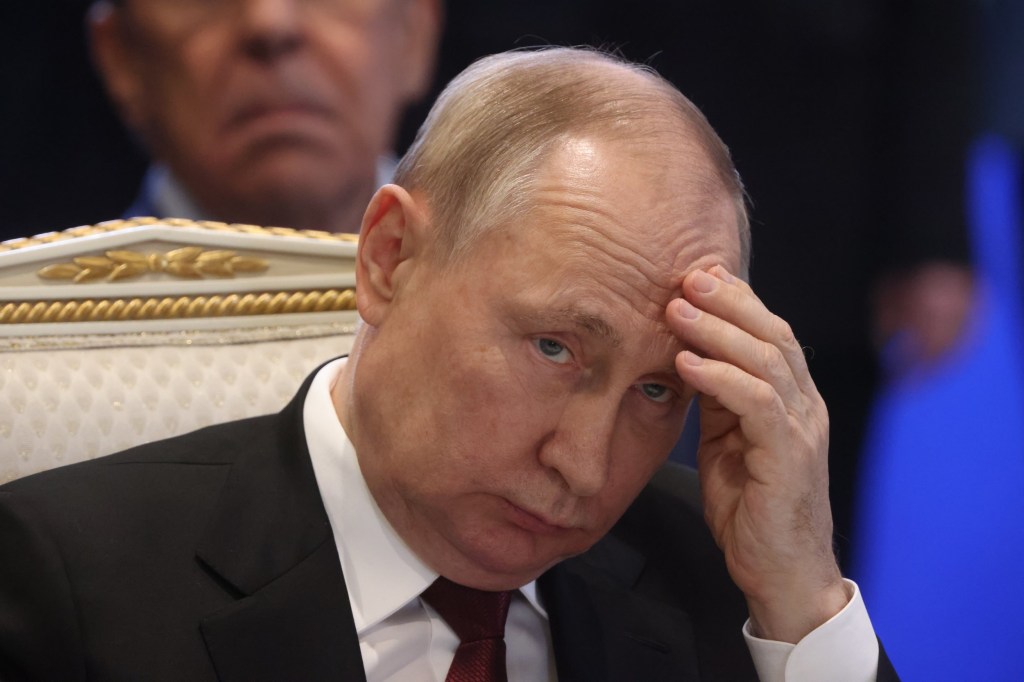 Putin may soon mobilise another two million soldiers – including 300,000 women – in a desperate attempt to fight Ukrainian forces.

Dmitry Peskov, one of the Russian president’s spokespeople, denied the Kremlin war-mongerer would conscript more troops to the front.

But Putin still refuses to sign the necessary decree which will end this current wave of mobilisation, fuelling rumours more is to come.

Russian sources have speculated up the huge numbers will be drafted as Russia continues to suffer humiliating defeats in Ukraine.

The General SVR Telegram channel alleged: ‘Putin considers it “sufficient” to call up another two million people, of which about 300,000 women.

‘A large number of victims among those mobilised, according to the president, will only rally Russian society and strengthen the current regime, and regardless of whether the result will be victory or defeat.’

Valery Solovey, former professor at Moscow’s prestigious Institute of International Relations, said: ‘The intention [is] to mobilise not 300,000, 400,000, or 500,000 but, with luck, up to two million people, including 300,000 women after the New Year celebrations.

‘Moreover, it is planned to conduct mobilisation at the same time as introducing martial law.’

The Russian president is rumoured to send up to 2,000,000 to fight in Ukraine (Picture: AP)

He warned: ‘It is supposed to extend the martial law either to the entire Russia or to a significant part of its territory including the Russian capitals – the cities of Moscow and St Petersburg.’

It comes as Russian convicts are being forced to fight in Ukraine, with authorities threatening them with longer sentences and beatings if they refuse, The Mirror reports.

The total prison population in Russia fell by 23,000 in just two months as Putin pushes for more to be sent to the front.

Military experts predict the next wave of mobilisation will happen in January (Picture: Reuters)

Some 500 prisoners have been killed fighting in Ukraine, having ‘volunteered’ themselves in exchange for freedom after the war.

A source said: ‘According to information gathered from what is being said by relatives it is impossible to refuse, as if prisoners do, they might disappear.’

‘You can be sent to work strengthening the defence capability of the country,’ the source added.

Others are also predicting new mobilisation will come in the new year.

‘You will celebrate New Year at home and then everyone will go to war. Otherwise we won’t win. So get ready.’

England expected to qualify for the knock-out stages tonight (Picture: Getty) England are on the brink of sealing their place in the knock-out stages of the World Cup with Wales up for a desperate fight to stay in the competition this evening. A goalless draw for England against USA last Friday put a slight dampener […]

The Callisto Protocol – will it be scary and a good game? (pic: Krafton) The Tuesday letters page looks forward to the second Super Mario Bros. Movie trailer, as one reader is upset there’s no new F-Zero. To join in with the discussions yourself email gamecentral@metro.co.uk Real gameAs a big fan of Dead Space I’m […]