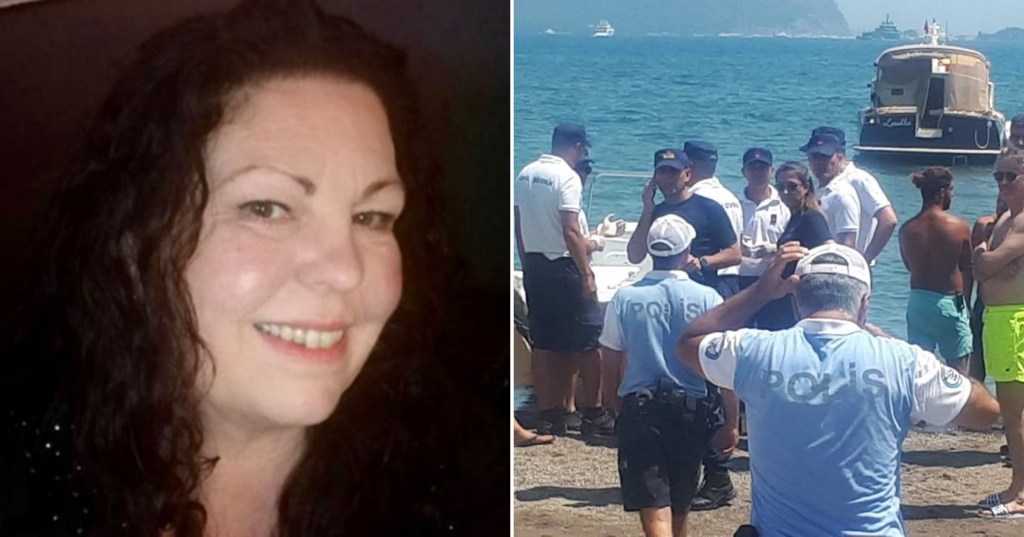 Anna Capuano, 44, was on her first trip away with her new partner (Picture: Mike Parris)

A British woman who was killed in a motorboat crash at a popular Turkish holiday resort has been pictured for the first time.

Anna Capuano, 44, from Ilkeston, Derbyshire, was travelling in a speed boat which hit a water taxi close to the beach in Marmaris.

The mum-of-three suffered serious head injuries from the collision, at 1.30pm on Thursday, and died in a tour operator’s arms.

She leaves behind two daughters, aged 11 and 13, and a 22-year-old son. Her partner, Peter Oxford, 39, was knocked unconscious.

He suffered severe internal injuries, and is believed to have broken several ribs. He was rushed to Ahu hospital nearby, where he remains in intensive care.

Two other British tourists were also hurt but only suffered minor injuries.

Anna and Peter had only recently started a relationship and were enjoying a seven-day package holiday at the five-star Lalila Blue Hotel.

Turkish authorities are investigating the crash at the popular resort of Marmaris (Picture: Mike Parris)

Their friend Baljeet Randhawa told MailOnline: ‘This is so sad, she had two young girls, and they will be heartbroken.

‘She had split up with her husband about a year ago and had recently met a new partner. It was their first time away together.

Baljeet’s husband, Sabjeet added: ‘She was a lovely person, bubbly and happy and always smiling.

A neighbour added: ‘Anna was a very nice woman and a good neighbour. She had just met a new partner and seemed happy. It is a terrible thing to happen, shocking.’

Where is hot in September? 12 destinations for a late summer break

There’s no shortage of good weather to be found in September (Picture: Getty Images) With travel open once again around the world, the summer holiday season has been pretty much normal for the first time in two years. July and August are of course peak season for breaks, with school holidays allowing families to get […]

Ambulance will give viewers an inside look into the rising care crisis in the UK(Picture: BBC) The UK’s emergency care crisis will be laid bare this week in a special edition of popular long-running BBC series Ambulance. The episode will show ambulances queuing outside hospitals, heart attack victims waiting hours for help, and an elderly […]