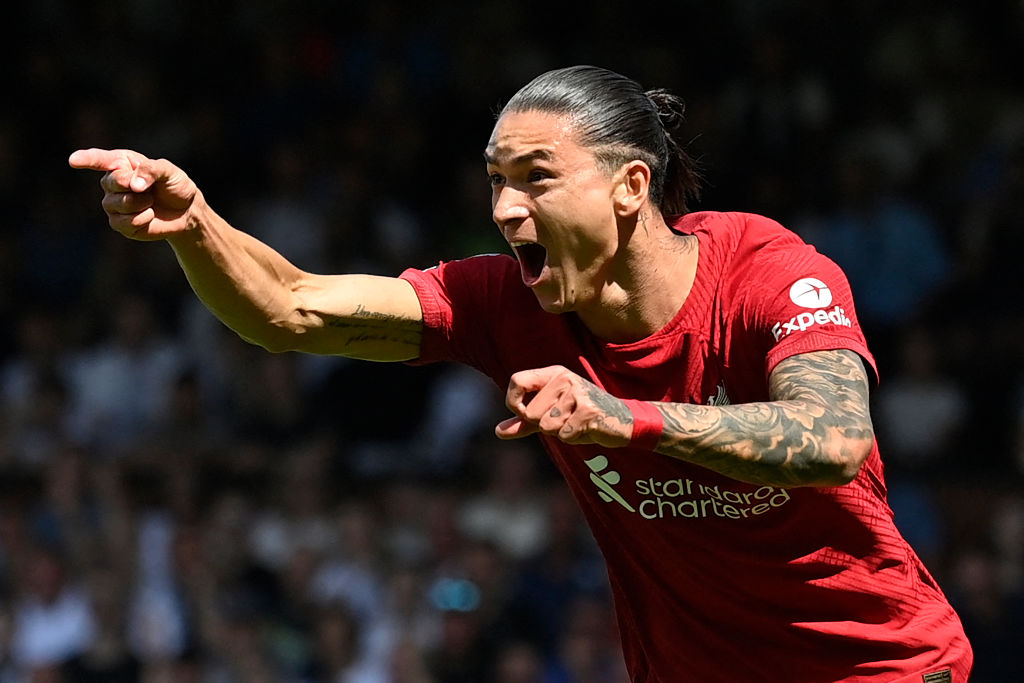 Darwin Nunez grabbed a goal and assist on his debut (Picture: Getty Images)

The £85million summer signing started the match on the bench but came on to make a decisive impact in the second half.

Fulham led the game at Craven Cottage twice, but Nunez contributed with a goal and assist to help the Reds rescue a point.

His goal was an audacious flicked finish, while he set up Mohamed Salah who levelled up the scores at 2-2.

‘Good impact, he can’t do any more – he’s been involved in both goals,’ Crouch told BT Sport.

‘I thought he led the line well. I think there’s lots more to come from him, he’s a tremendous signing.’

Crouch also highlighted fellow substitute Harvey Elliott, who also impressed after he was brought on as a substitute in the second half.

The former Liverpool striker believes Elliott can help add a creative spark to the midfield and is expecting big things from the 19-year-old this season.

‘Harvey Elliott as well, I think he’s going to have a real good season,’ Crouch added.

‘They’ve talked about the creativity in Liverpool’s midfield.

‘I think he’s the man to bring it this year I really do.’

On Liverpool’s display, Reds boss Jurgen Klopp said: ‘The best news about this game is the result, so I am really fine with the point.

‘I know we could’ve won the game, that wouldn’t have made our performance a little bit better, but we could have, but it would have been too much today.

‘I am happy for the punishment we got with losing two points, if you want. I know you can see that differently – Fulham might say as well they lost two points – but that’s how football is.

‘We all can see it our way. But again, the most positive thing is the result.’

MORE : Diogo Jota says Liverpool ‘have everything to fight for titles’ as he signs new long-term contract

Georgian church converted into a family home on sale for £1.3million

The home is a converted church (Picture: North News & Pictures Ltd) A Georgian church that has been converted into a family home has gone onsale for £1.3million. For that same price you could get a one-bedroom apartment in London, so this feels like a bit of a steal. The historic five-bed room, three-bath room […]

Manchester United rejected chance to sign Benjamin Sesko for just £2.5m in 2019…and now they must pay £50m to land teenage sensation