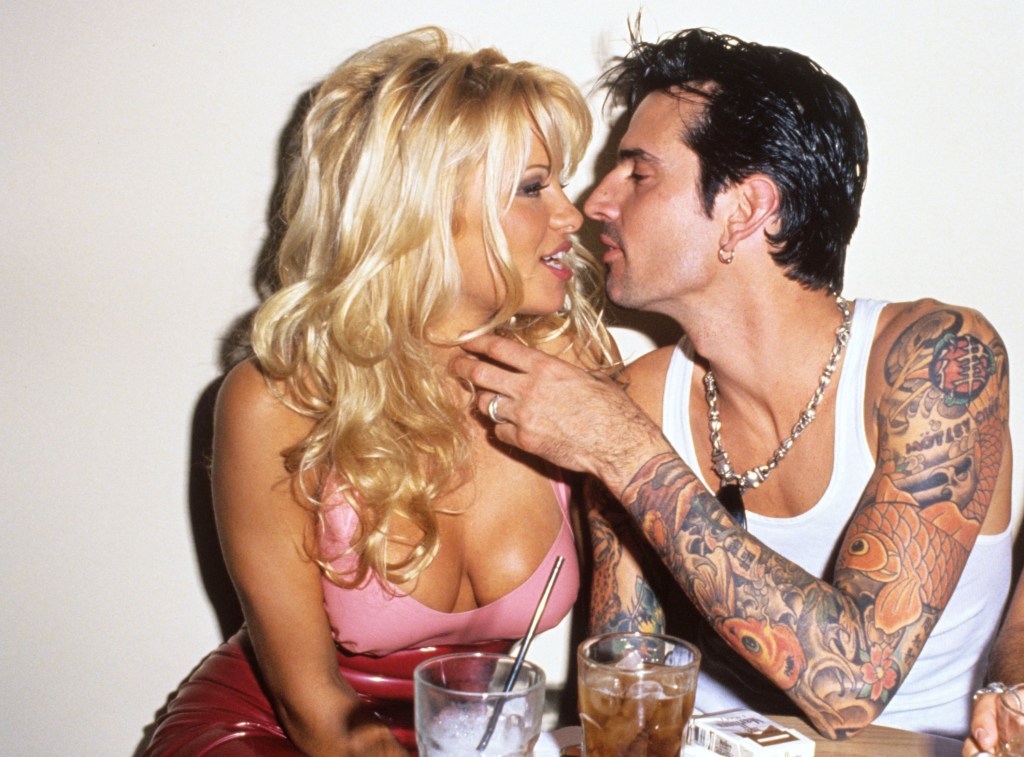 Pamela and Tommy had a rollercoaster romance from the start (Picture: S. Granitz/WireImage)

Pamela Anderson became visibly emotional in her Netflix documentary while talking about her past relationship with Tommy Lee, stressing that she loved her ex-husband ‘for all the right reasons’.

In her new film – titled Pamela, a love story – the former Baywatch star has opened up candidly about her life and career, taking viewers behind-the-scenes of her tumultuous love affair with the Mötley Crüe drummer.

The couple wed in 1995 in Cancún, Mexico after just four days together in a whirlwind romance, going on to have two children together – Brandon, 26, and Dylan, 25.

However, they divorced in 1998 after Tommy was sentenced to six months in jail for spousal abuse. A few years later, they were granted joint custody of their sons, and Pamela wrote in her soon-to-be-released memoir that they ‘check in’ with each other ‘every once in a while’.

At one point during the programme, Pamela and Brandon sat down together to watch an old home movie of Pamela surprising Tommy with a ceiling covered in purple balloons for his birthday.

In the video, the couple told each other that they loved each other, before cheersing to their relationship.

While watching the film, Pamela initially gasped with astonishment at the nostalgic footage, before taking an emotion-laden deep breath after watching it play out.

‘I think I need to take a break. Let’s take a break. I kind of fear what’s next,’ she said, getting up from her seat and walking away.

Expressing his own amazement over the video, Brandon told the camera: ‘So crazy, you know? My parents were actually probably the two most insane people ever to live on planet Earth.’

The couple had two children together (Picture: Jeffrey Mayer/WireImage)

He continued: ‘I just know he was so happy too. But I don’t even remember that. ‘Cause by the time I was three, four years old, by the time I’m starting to remember things, it definitely wasn’t all sunshine and rainbows.’

When Pamela returned to her eldest son, she told him: ‘I was just thinking about it upstairs, I was thinking, you know… I’m probably going to get into a lot of s**t for saying this, but I really loved your dad for all the right reasons, and I don’t think I’ve loved anybody else.’

The model sat back down, an upset and possibly tearful expression dawning on her face as she looked over her fun, stating: ‘It’s f**ked.’

Pamela sounded choked up as she walked away again, saying to Brandon: ‘Let’s go for a walk.’

The mother and son then walked out of the room, their arms wrapped around each …read more

Street Fighter X Tekken – not the best crossover (pic: Capcom) Readers imagine swapping the main characters of one game with another, with Mario in The Witcher and Bayonetta in God Of War. The subject for this week’s Hot Topic was suggested by reader Onibee, who invited readers to pick any two games, regardless of […]

Horizon Forbidden West – it’s definitely a pretty game (pic: Sony) Readers tackle the age old debate of what’s more important in a video game: its graphics or its gameplay? The subject for this week’s Hot Topic was suggested by reader Paulie, who asked whether it matters to you how good the graphics are in […]

Zara has left the Love Island villa (Picture: Rex Features) Love Island lost its sassy bombshell Zara Lackenby-Brown tonight as she was eliminated in the recoupling. The model and dancer, 25, was the last girl standing after the boys chose who they wanted to recouple with in Wednesday’s episode. Awkwardly, it was Zara’s ex Tom […]