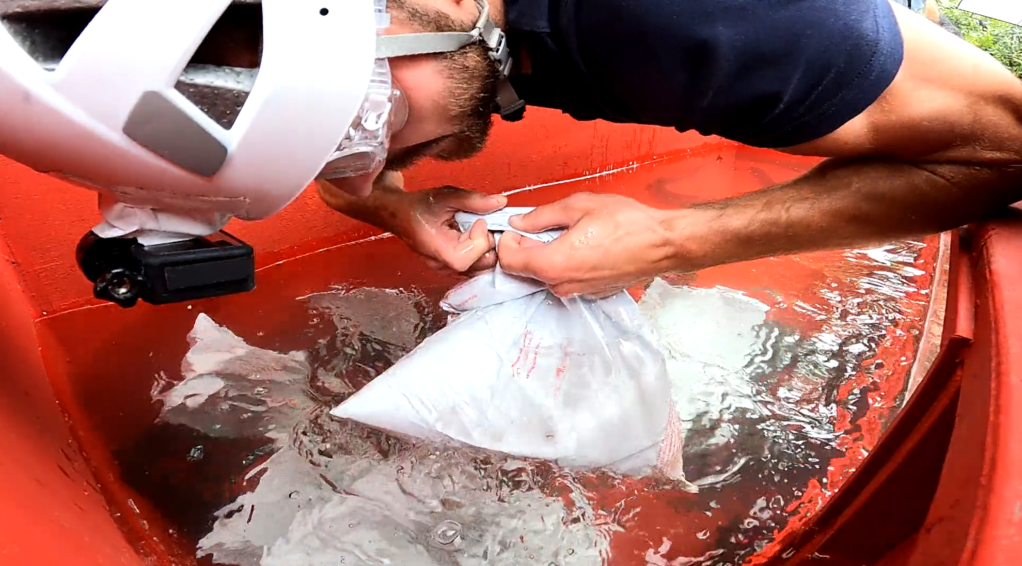 Chris Moyles and Owen Warner are set to team up in the latest I’m A Celebrity Bushtucker Trial, joining forces in a challenge that will require stellar levels of communication amid swarms of creepy critters.

For the past few days, radio DJ Chris has been increasingly keen to prove himself, having only managed to secure one star when he took on the Boiling Point trial.

Tonight, he will finally have his chance to win more stars for camp, with Hollyoaks star Owen in tow to boost their chances as they buckle up for The Savage Sorting Office.

However, it won’t necessarily be a smooth-sailing operation, as a preview of Thursday’s episode showed Chris blindfolded while controlling a contraption that’s suspending Owen in mid-air.

In the clip, Declan Donnelly tells Chris and Owen that their first 90-second block is about to begin, during which they’ll be given their first postage cart to sort through.

Owen has to use his core strength while also dealing with the critters in the water (Picture: ITV)

Chris admits he’s struggling with the weight of his part in the task (Picture: ITV)

Owen instructs Chris to bring him to the right and lower him gently, discovering that he has to dip his hands into a cart submerged in water that contains yabbies, mud crabs and eels.

At one point, Chris appears to lower Owen just a little bit too much, with the actor calling out to him to ‘stop’.

‘Oh my god this is heavy!’ the radio presenter exclaims.

If that was only the first part of the challenge, we have our fingers crossed they’ll be able to succeed for the rest!

Do you think Owen and Chris will win a full house of stars?Comment Now

There are currently six celebrities left in the jungle after Babatunde Aléshé’s elimination last night, with Chris and Owen two of the campmates left in the running for the crown.

Matt Hancock, Mike Tindall, Jill Scott and Seann Walsh have also been kept in by the public’s vote, as the show inches closer to the grand finale.

I’m A Celebrity returns tonight at 9pm on ITV.

MORE : Boy George hits back at Lorraine Kelly after she laughed about his I’m A Celebrity ‘tantrums’

MORE : Matt Hancock opens up about struggles with dyslexia during I’m A Celebrity challenge

Jonathan Ross is not a fan of Matt Hancock (Picture: Getty) Don’t expect Matt Hancock to make an appearance on The Jonathan Ross Show anytime soon as the presenter has made it perfectly clear that he does not like the politician – and he didn’t mince his words either. Hancock is still living it up […]

Patrice Evra revealed his admiration for the new Man Utd star (Picture: Getty) Patrice Evra has explained why he ‘loves’ new Manchester United defender Lisandro Martinez and taken a swipe at former Arsenal captain Per Mertesacker. Martinez, who is currently with Argentina’s World Cup squad in Qatar, has enjoyed an impressive start to his United […]

Red Bull’s Max Verstappen and Sergio Perez celebrate on the podium after the Abu Dhabi Grand Prix (Picture: Reuters) The finale summed up this 2022 F1 season, with Max Verstappen winning by nearly nine seconds, untroubled from pole to the chequered flag. Of course, there have been one or two downs for the Dutchman this […]