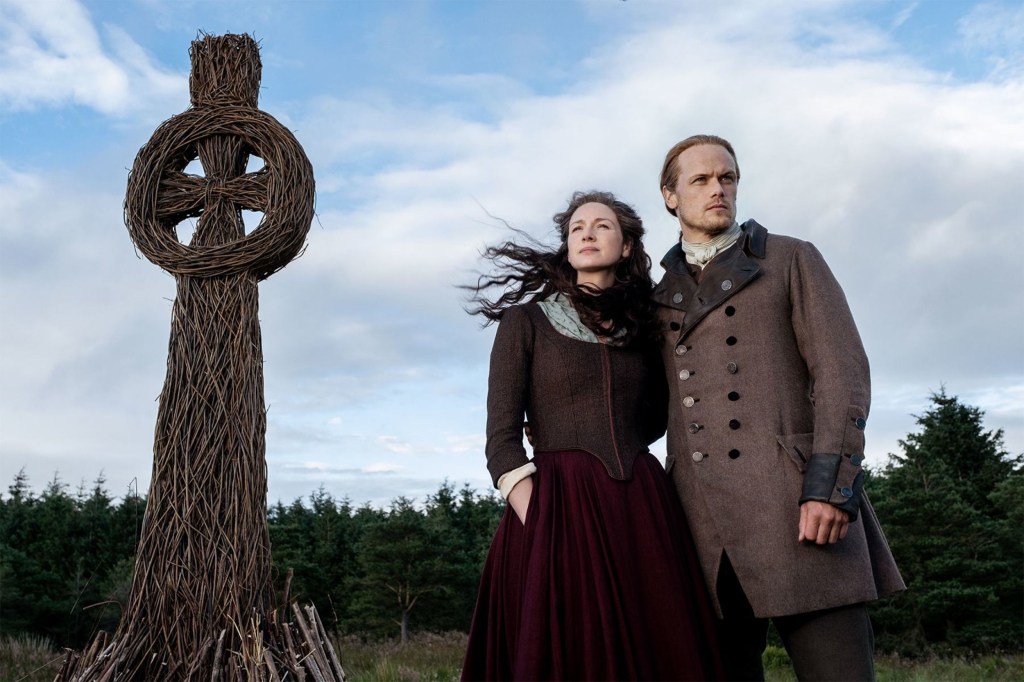 Is this the beginning of the end for Outlander? (Picture: Starz!/Kobal/REX/Shutterstock)

A prequel series of the Starz historical drama Outlander has officially started production – and fans aren’t quite sure how they feel.

The spin-off, which is set to be called Outlander: Blood of My Blood, will follow the parents of Outlander mainstay Jamie Fraser (Sam Heughan).

The original show follows the adventures of Claire (Caitríona Balfe), a former World War II nurse who is transported back to Scotland in the 1700s.

While stuck there, Claire marries Jamie, initially to keep herself safe, but the pair soon fall in love and become the main focus of the series.

It has recently been renewed for a seventh season, which is just beginning production, but plans are now in place to expand the Outlander universe.

After the announcement was made, fans of the show expressed mixed reactions: ‘Please say this doesn’t mean the end of Jamie and Claire’s story on Outlander.’

Claire has been the series’ main focus since the first episode… (Picture: Robert Wilson/Starz)

Another fan said: ‘What about the main story? Usually prequels are made when the main series has finished. What about a season 8? Will season 7 be the final season?’

‘Really wish we’d hear about season 8 and/or appropriate conclusion to the current production first before starting another,’ a third user commented.

Some fans did show their excitement for the upcoming prequel.

‘I have read all the books multiple times. It will be nice to see something that I haven’t read already,’ one dedicated watcher offered in defence.

‘So happy! Hope it will be as wonderful, sexy, historically accurate, fun, as Outlander is and filmed in Scotland! Am sure it will be, but still keep my fingers crossed!’

Executive producer Matthew Roberts has assured, however: ‘A beginning doesn’t mean an ending…’

Jamie’s parents, Brian Fraser (Andrew Whipp) and Ellen McKenzie, are already dead before the events of the main series.

Blood of My Blood will be helmed by TV writer and showrunner Matthew B. Roberts, who is also a writer and producer for Outlander.

The associations with Outlander behind the scenes don’t stop there either, with developer Ronald D. Moore also attached to the prequel.

Hosepipe ban comes into force today ahead of next heatwave

Kathryn Busby, official head of programming for Starz, said: ‘We are excited to peel back the layers of this vibrant world to bring our audience the origin of where it all began.’

‘Matthew, Maril [Davis], and Ronald will continue to bring their excellent vision and creativity to this new iteration, and we can’t wait to see what happens next.’

You can …read more

To view this video please enable JavaScript, and consider upgrading to a web browser that supports HTML5 video Gemma Owen is fortunately in dad Michael Owen’s good books after managing to avoid ‘disgracing’ the family on Love Island. The international dressage rider finished second place on this year’s series after finding romance with fishmonger Luca […]

Bez is mourning two deaths close to heart (Picture: Getty Images) Happy Mondays star Bez is reportedly grieving the death of his father as well as his bandmate Paul Ryder.  The English pop group have been left devastated by the death of bassist Paul, who died suddenly on July 15 at the age of 58, […]

Empathy isn’t a weakness, it’s a strength (Picture: Getty/Metro.co.uk) Me, an empath, sensing you might be interested in this article after clicking on it. We’ve all seen the gentle ribbing of so-called ’empaths’, who declare they have such intense empathy that they carry it around like a weight, picking up the emotions and trauma of […]