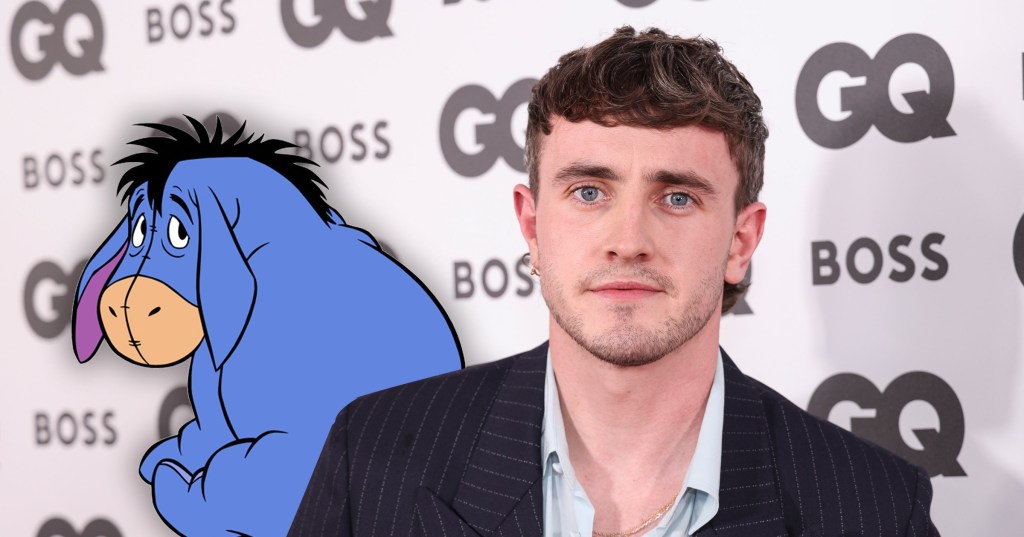 Paul Mescal reveals the part he would play in his favourite childhood cartoon (Picture: AP/Shutterstock/Disney)

Paul Mescal revealed he would love to play Eeyore if Winnie-the-Pooh creators were to announce a live-action remake of the children’s cartoon amid news of his Oscar nomination.

The 26-year-old Irishman received a nod from the prestigious Academy Awards for his performance as Calum in Aftersun on Tuesday.

Reflecting on his childhood in Maynooth, the critically acclaimed actor admitted he was a Winnie fan as a young boy and would be delighted to star in a modern-day version of the story.

He took his time contemplating which character would best suit him and settled on the sad, pessimistic donkey due to his previous parts all being of the same sombre nature.

‘I watched a lot of Winnie-the-Pooh growing up so that would be a flagship dream if Winnie came in with Tigger, I’d lose my f**king mind,’ he told hosts of the Off Menu podcast.

Ed Gamble and James Acaster – presenters of the popular podcast – questioned the Oscar nominee over which part he would be vying for if the chance to star in a live-action remake came up.

Paul told a popular podcast that he would be keen to act in Winnie-the-Pooh (Picture: Getty Images)

The star was nominated for his performance in Aftersun (Picture: Shutterstock)

Paul ultimately decided ‘probably Eeyore’ which evoked a round of ‘ahhs’ from the broadcasters.

‘Stick to the sad stuff,’ he continued. ‘I feel like he’s the dramatic centre of Winnie-the-Pooh.

The hosts agreed and guessed it would be the internet’s choice of type casting for the Normal People star.

His feature on the British podcast came after news broke of his first-ever Oscar nomination for the dramatic film Aftersun.

Paul was listed as being in with a chance to win a golden statue for best actor in a leading role alongside fellow Irishman Colin Farrell for his part in The Banshees of Inisherin, Elvis star Austin Butler, Brendan Fraser for The Whale and Living’s Bill Nighy.

He reacted to the honour in a statement that read: ‘This is truly a special moment for everyone involved in Aftersun.

‘To be recognised by the Academy is such an insane honour and I’m so utterly grateful.

‘I want to dedicate this nomination to my two friends Charlotte and Frankie who I love dearly! This is bananas, thank you!’

Set in the early 2000s, Charlotte Wells’s Aftersun tells the story of an 11-year-old Scottish girl who goes on vacation with her father Calum (Paul) to a Turkish resort on the eve of his 31st birthday.

If you’ve got a celebrity story, video or pictures get in touch with the Metro.co.uk entertainment team by emailing us celebtips@metro.co.uk, calling 020 3615 2145 or by visiting our Submit Stuff …read more

Disabled woman who fell off wheelchair on plane walkway dies

A poster seeking information in the search for missing woman Nicola Bulley in the village of St Michael’s on Wyre (Picture: Getty) To view this video please enable JavaScript, and consider upgrading to a web browser that supports HTML5 video Missing mum Nicola Bulley fell into a river while walking her dog, police believe, as […]

To view this video please enable JavaScript, and consider upgrading to a web browser that supports HTML5 video Ben Shephard has remarked that while at times Rishi Sunak ‘doesn’t feel or seem that human’, there were moments during his Piers Morgan interview when that changed. Last night, the Prime Minister sat down with the TalkTV […]