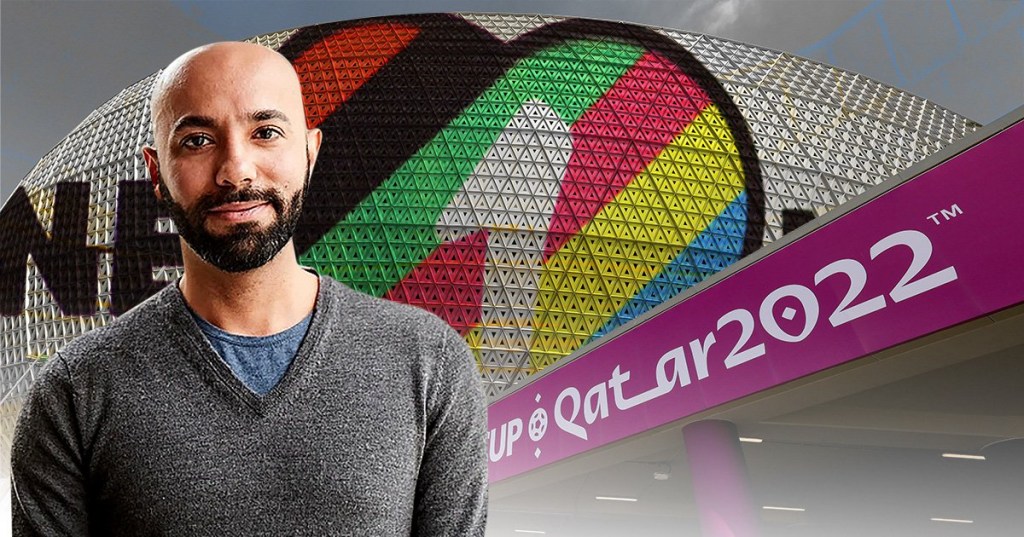 Dr Nas Mohamed has stepped out of the shadows to make the case for LGBTQ+ people during Qatar’s World Cup year (Picture: AP/Reuters/Getty/@dr._nass)

The only gay Qatari with a global profile has warned that the banning of rainbow armbands at the World Cup will have global repercussions for LGBTQ+ people facing hate and intolerance.

Dr Nas Mohamed reacted with dismay to the ‘dangerous and frightening’ move after England and Wales abandoned the show of solidarity in the face of possible yellow cards and suspensions from FIFA.

England captain Harry Kane had been expected to display the OneLove armband before the Three Lions’ clash with Iran yesterday.

However the England and Wales football associations, fearful of FIFA imposing sporting sanctions, decided to drop the show of solidarity.

Dr Nas, who now lives in the US, warned that the abandonment of the ‘simplest gesture of love and support’ would have worldwide repercussions for the LGBTQ+ community.

He told Metro.co.uk: ‘This issue is definitely global. We are all fighting the same mentality in different countries.

‘People are allowing it to happen on such a global scale in Qatar.

‘This is a hit against us everywhere.’

Dr Nas Mohamed has made the bold decision to share his true self with the world (Picture: Dr Nas Mohamed/@dr._nass)

The associations have asked the captains not to wear the armbands, which feature the Pride colours and a striped heart, due to the sporting sanctions they could face from FIFA.

They said that world football’s governing body had been ‘very clear’ that it would take action which could include players being ‘booked or even forced to leave the field of play’.

The climbdown followed FIFA president Gianni Infantino making an indignant opening speech on Sunday in which he likened having ‘red hair and freckles’ to being gay, disabled or a migrant worker.

His words were a precursor to the body’s tough line on the armbands, which would have been a visible expression of tolerance and inclusion in a country where same-sex relations are illegal.

Dr Nas, 35, has previously described the oil-rich emirate as a ‘house of abused children’ in terms of its treatment of LGBTQ+ people.

Now living in California, the physician has received death threats and abusive messages on social media and accepts he will never return to Qatar.

He also referred to a gunman killing five people at an LGBTQ+ nightclub in Colorado Springs on Saturday night, at the same time as the World Cup was opening in Qatar.

‘I strongly believe that we, the global LGBT community, need to fight this together,’ Dr Nas said.

‘This is dangerous and frightening.

Dr Nas views the banning of rainbow armbands at the World Cup as a blow to LGBTQ+ people everywhere (Picture: Dr Nas Mohamed/@dr._nass)

Robert MacCallum slept with the pupil after they left Hulme Grammar School (Picture: MEN Media) A teacher has been banned from the classroom after he booked a hotel room to have sex with a former pupil. Robert MacCallum, 39, had a ‘very close’ relationship with the student, named only as Pupil A, while they attended […]

It’s fair to say Amazon will probably make a lot of money today (Credits: Getty) This article contains affiliate links. We will earn a small commission on purchases made through one of these links but this never influences our experts’ opinions. Products are tested and reviewed independently of commercial initiatives. Nobody does sales like Amazon. […]

EastEnders spoilers: Lola reassures Lexi that she won’t die but tragedy will follow

Lola may be giving Lexi false hope (Picture: BBC) Jay (Jamie Borthwick), Billy (Perry Fenwick) and Ben (Max Bowden) have been cautioning Lola (Danielle Harold) for a while now in EastEnders that she should be honest with her daughter Lexi (Isabella Brown) about her illness. As viewers know, Lola has been told that her brain tumour […]