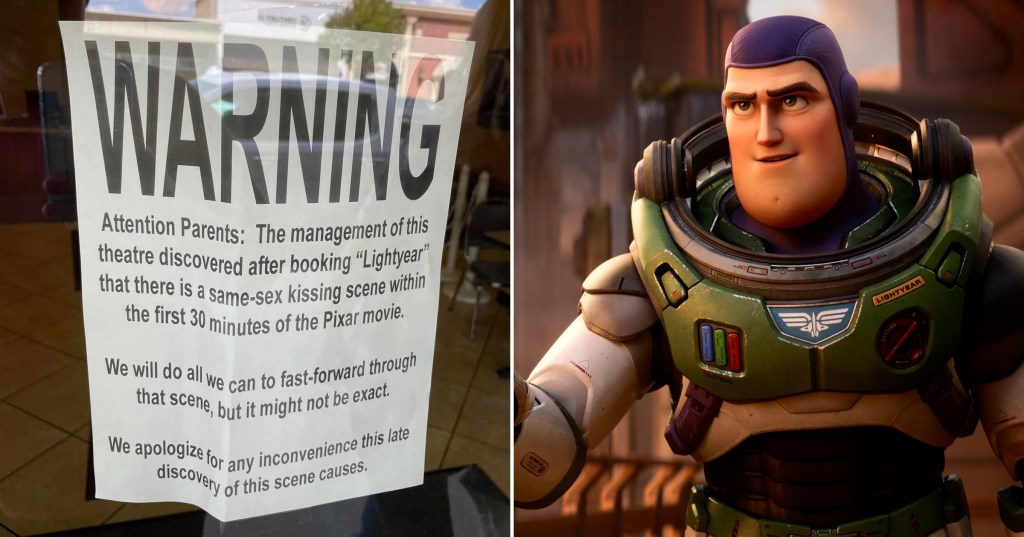 A cinema has been criticised for vowing to ‘fast-forward’ a same-sex kissing scene in the Pixar movie (Picture: Twitter/Pixar)

A theatre in Oklahoma has faced backlash after issuing a warning over the same-sex kiss in the new Buzz Lightyear movie.

The 89er Theatre sparked controversy after stating that they would ‘fast-forward through’ the brief kissing scene in the Toy Story spinoff, posting a sign as a ‘warning’ to customers.

They displayed a poster in their window – which has now been removed – following the film’s release, which has been overshadowed by criticism over the kiss between two female characters, one of which is named Hawthorne and voiced by Uzo Aduba.

‘Warning’, their poster began in large letters, ‘Attention parents: The management of this theatre discovered after booking Lightyear that there is a same-sex kissing scene within the first 30 minutes of the Pixar movie,’ they continued.

‘We will do all we can to fast-forward through that scene, but it might not be exact.’

The theatre signed off by apologising for ‘any inconvenience’ the ‘late discovery of this scene causes.’

Lightyear has been banned in several countries due to the kiss between two female characters (Picture: Pixar)

Residents of Oklahoma were both shocked and disappointed to see the sign in the cinema’s window, with 42-year-old Patricia Kasbek, 42, saying she initially thought the sign was a joke.

She posted a picture of it on social media in jest, but grew outraged upon learning that the sign was real.

‘After calling the theatre, asking them to remove the warning, her call went to voicemail.

‘I told them that it was completely insulting for them to censor a same-gender kiss when they’ve never done this to an opposite-gender kiss,’ she told NBC News.

She added that she ‘never see a movie at this theatre while under this ownership,’ branding their behaviour ‘cruel’ and ‘bigoted.’

The Oklahoma cinema issued a ‘warning’ to parents going to see the film (Picture: Twitter)

According to NBC affiliate KFOR of Oklahoma City, the sign was gone by Monday afternoon after supposedly being put up over the weekend.

Alex Wade, deputy director of LGBTQ+ advocacy organisation Oklahomans for Equality, also condemned the theatre’s sign, saying: ‘I am not shocked to see something like this happening in my state, but it does break my heart that young LGBTQ+ Oklahomans are made to feel like something is wrong with them.’

The same-sex kiss in Lightyear marks the first in one of Pixar’s productions.

Chris Evans – who voices Buzz in the film – spoke out in support of the LGBTQ+ community (Picture: James Veysey/REX/Shutterstock)

Recently, Captain America actor Chris Evans – who voices the main character Buzz Lightyear – spoke out in support of the LGBTQ+ community, after the film was supposedly banned in Saudi Arabia, Egypt …read more

AirBnb properties near Glastonbury going for thousands during festival

Dame Kelly appeared on Friday’s Loose Women (Picture: ITV) Dame Kelly Holmes has admitted she’d never told anyone in the athletics industry about her sexuality until opening up to friend Sally Gunnell, just weeks ago.  The 52-year-old Olympic champion, who first realised she was gay aged 17, shared the news last weekend in a moving […]

As a disabled woman, I forgive Lizzo for the GRRRLS controversy

This isn’t Lizzo’s only inclusivity scandal of late either (Picture: Matt Winkelmeyer/MG22/Getty Images for The Met Museum/Vogue ) I doubt Lizzo got the response she wanted after dropping new single GRRRLS a couple of days ago.  The lyrics, which have now been changed, read: ‘Hold my bag/ Do you see this s**t?/ I’mma sp*z.’ After a deserved […]