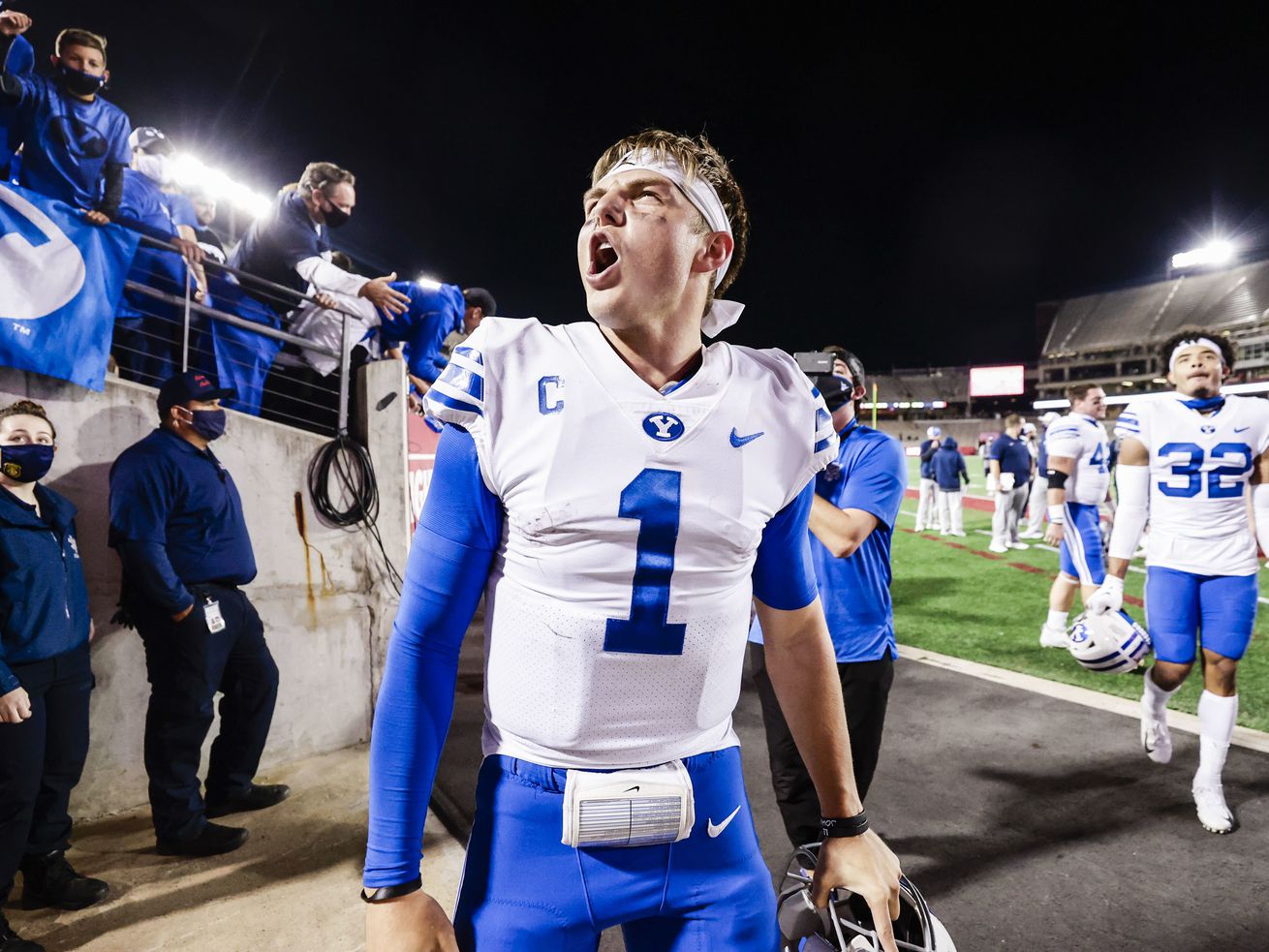 Missing several key players and looking inept on defense in the middle quarters, Cougars rise up and outscore Houston 22-0 in the fourth quarter to improve to 5-0 with another convincing road win

HOUSTON — After all the craziness, an ill-advised gamble near Houston’s goal line late in the first half that resulted in a huge six-point swing, some bizarre penalties and non-calls, a brilliantly executed onside kick that netted no points but a ton of adulation from his team, BYU football coach Kalani Sitake did the unimaginable, for him, on Friday night at quarter-filled TDECU Stadium.

He chose not to go for it on fourth down near midfield, putting aside the inner-gambler in him to put the game in the hands of his defense, which was slowly gaining steam after getting pulverized before the fourth quarter.

The defense delivered, a sentence which is hard to write, but undeniably true, after Houston had racked up 418 of its eventual 438 yards in the first three quarters. The red Cougars were moving through the injury depleted blue Cougars so easily in the second quarter that it was almost comical at times.

“I feel like the statement we made is that we are a big-time team.” — BYU quarterback Zach Wilson

Led by precocious junior quarterback Zach Wilson and deceptively dangerous wideout Dax Milne, No. 14-ranked BYU’s offense took it from there, posting 478 yards on just 59 plays in a national attention-grabbing 43-26 win in front of 10,092 fans — many of them decked out in blue — and an ESPN audience.

“I really wanted to go for it,” Sitake acknowledged later.

A less seasoned coach probably would have, but Sitake listened to some of his assistants this time and took the safe route. He punted, and the defense held and forced Houston to punt on a third-straight possession.

“That was the right decision,” said Sitake, who improved to his record to 32-25 as a head coach in his fifth year, the most he’s ever been over .500 in Provo. “I was glad I talked to the coaching staff and did that.”

Wilson wasn’t happy the offense was called off the field, but he understood it. Memories of getting stuffed on fourth-and-1 from the 2 late in the first half were still fresh.

“It was a (ticked) off mentality, but hey, we are going to get the next one,” was the sentiment, Wilson said.

Is BYU for real? That’s the question college football fans far and wide, include many of its own, wanted answered as it faced the first legitimate threat to the Cougars’ perfect season. A convincing 17-point win should hold the naysayers off, at least until Nov. 6 gets here and big, bad Boise State hosts the Cougars on the blue, where they have never won.

“I feel like the statement we made is that we are a big-time team,” Wilson said.

Elon Musk reportedly sold Gene Wilder’s former estate to Wilder’s nephew, and may have financed 95% of the sale (TSLA)

Summary List Placement Elon Musk has made good on his promise to sell the former estate of Gene Wilder — and the buyer is Wilder’s nephew, according to Variety’s James McClain. Musk, who purchased the property in 2013, sold it for $7 million to an LLC managed by screenwriter and producer Elizabeth Hunter, who is […]

Summary List Placement Former Governor John Hickenlooper will face GOP Sen. Cory Gardner in Colorado 2020 US Senate’s race.  The candidates Gardner, who was elected to the US Senate in the 2014 Republican midterm wave, is now one of the most vulnerable incumbent GOP senators due to the state’s Democratic shift and his own strong […]

THE ESPORTS ECOSYSTEM: The key players and trends driving the red-hot, fast-growing esports space that’s on track to surpass $1.5 billion by 2023