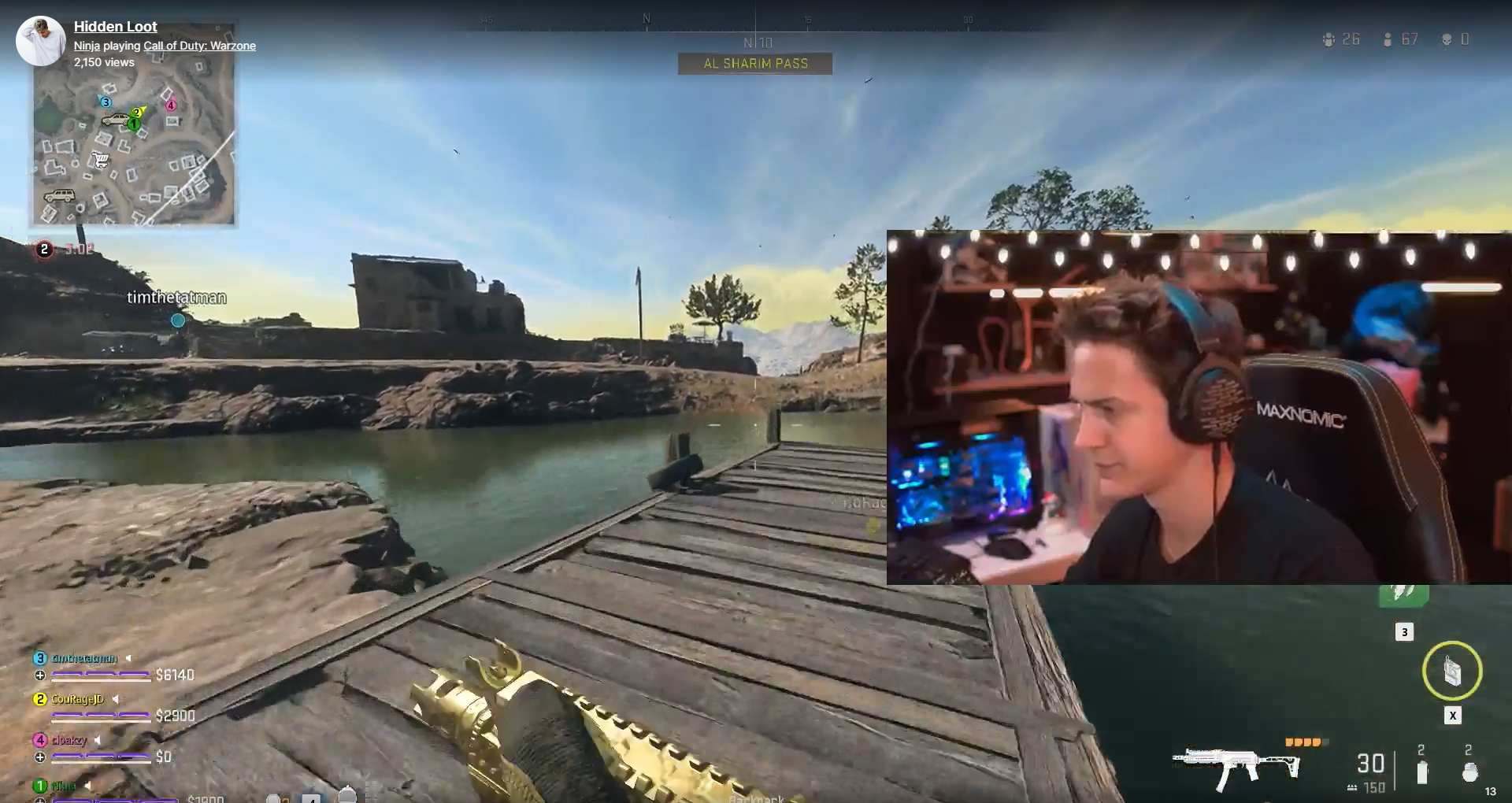 This was no ordinary pond (pic: Twitch)

While playing Warzone 2, Twitch streamers Ninja and CouRageJD discovered some hidden loot at the bottom of a pond in Al Mazrah.

Call Of Duty: Warzone 2 has only been out for a few hours and many streamers have already posted videos playing with all the new weapons and operators that came with Season 1.

Another brand new feature that’s in both Warzone 2 and Modern Warfare 2 is aquatic combat, meaning that you can jump into any body of water on the map, swim around and even kill enemies while submerged.

While playing the battle royale mode, Ninja and CouRageJD decided to go for a swim, but they actually ended up discovering something unexpected at the bottom of a seemingly ordinary pond.

The duo was part of a four-person squad also featuring Twitch stars TimTheTatman and Cloakzy, with the last two roaming around near them.

The all-star squad was exploring near the Al Sharim Pass area, as they were running away from the gas circle and into one of the safe zones.

This was the team’s location when they discovered the hidden loot (pic: Twitch)

Suddenly, CouRageJD saw the pond and started heading towards it, before taking a plunge and reaching the bottom.

‘Oh my god, there’s a hidden loot catch at the bottom of here, with a free armour plate and precision airstrike on it.’

Ninja who was right behind him also jumped into the pond to inspect the hidden loot, but he didn’t pick up any of the items in the end.

Seeing what Ninja and CouRageJD found, it’s likely that there are more capsules hidden within Al Mazrah’s murky waters, though it might be difficult to loot them if there are enemies around.

So far, it seems that the arrival of aquatic combat and exploration is a welcome change to Warzone 2 and its movement mechanics.

The previous version would kill you off if you dipped your toes into deep water, so having the ability to not only swim but also to drive boats around the map will definitely help to change things up.

MORE : Modern Warfare 2 and Warzone 2 battle pass: how to level up, free skins and bonus sector

Police officers attempt to prevent activists from Just Stop Oil forming a rolling protest through Shepherds Bush in west London this morning (Picture: Ben Cawthra/LNP) After a couple of weeks of relative quiet, protesters from Just Stop Oil are back on the roads trying to cause maximum disruption to motorists. Today’s action in London is […]

Your daily horoscope for Sunday, November 27, 2022

Mercury and Uranus are aligning, bringing some big changes (Picture: Getty/Metro.co.uk) Mercury and Uranus are tying up for the end of the week, marking a change for some star signs. It could see Taurus cleaning up a big issue and moving on with a clearer head. Leos will probably opt for a sponteanous approach to […]