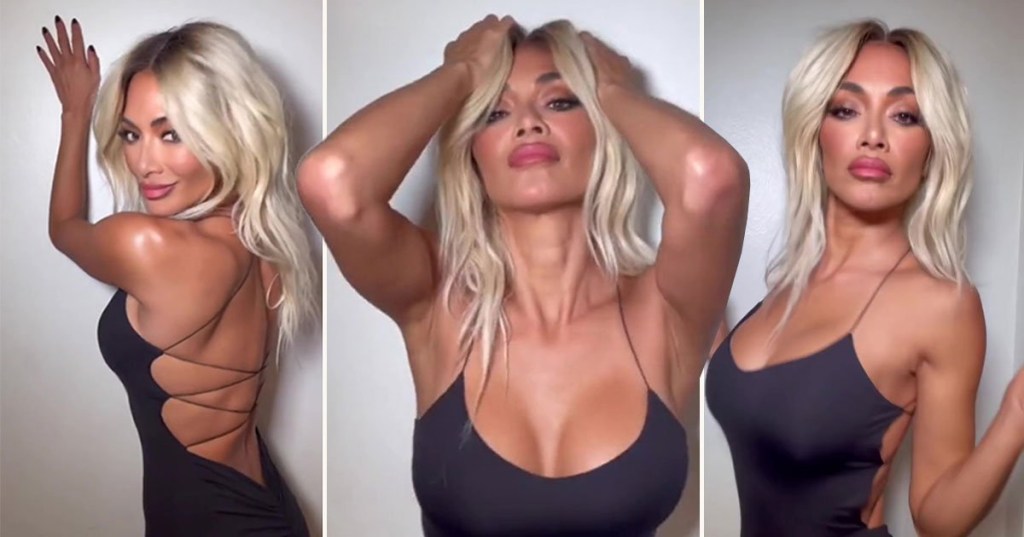 Nicole Scherzinger debuted a shocking new look on TikTok in a sultry video that sent fans into a frenzy on Wednesday.

The 44-year-old pop star revealed her transformation to her 3.4million followers and donned a slinky black dress for the occasion.

In the clip, Nicole first sported grey tracksuit bottoms and a white crop top as she shook her luscious locks to the tune of a Reece Witherspoon Legally Blonde script snippet.

She uploaded the raunchy footage with the caption: ‘Do blondes really have more fun?’ and has already amassed thousands of views on the video.

Adding dramatic effect to the post, the superstar positioned a fan out of vision and allowed the air to blow her hair off her shoulders and flutter in the artificial wind.

Beginning the showcase in the casual ensemble, Nicole cut the footage and re-emerged in the black midi-dress that hugged her taunt figure.

Do blondes really have more fun?💁🏼‍♀️

Turning her back to the camera, she revealed the number’s crisscrossed design at the back of the outfit as she seductively ran her fingers through her new hair.

In another video that closely replicated the star’s latest upload on Instagram, she credited hairstylist Dimitris Giannetos for creating her striking blonde look and suggested that it was actually dyed and not just a wig.

The decision to change up her hair evoked a lot of reactions from fans, but many quickly noticed the resemblance between the Pussycat Dolls star and Kim Kardashian.

The star began the video in a more casual ensemble before stunning in black (Picture: Nicole Scherzinger / TikTok)

Nicole turned around to show off her racy back (Picture: Nicole Scherzinger / TikTok)

What do you think of Nicole’s new look?Comment Now

One penned: ‘Look like Kim I remember when I was young I thought you were a Kardashian sister [sic]’.

Another commented: ‘Why did I think it was kim k? [sic]’.

Nicole stepped out solo in her glittering outfit (Picture: BACKGRID)

She kept away the chill in a long white fur jacket (Picture: BACKGRID)

‘people on her saying you look like Kim k when it’s obvious you came before Kim k. Lol [sic]’, a TikTok user noted.

News of her blonde transformation came after the usually brunette singer stepped out solo for dinner at the celebrity haunt Craig’s in West Hollywood, Los Angeles.

The beauty donned a glitzy mini-dress covered in jewels for the outing and kept away the cold in an oversized white fur jacket.

She paired the dress with transparent fish-net tights, nude high-heeled stilettos and jewelled chandelier earrings she clipped on beneath her raven tresses.

If you’ve got a celebrity story, video or pictures get in …read more

Rogue AI could annihilate mankind if not regulated, warn scientists

It could be the end for humankind if we are not careful (Picture: Paramount/Skydance Prods/Kobal/REX) A rogue artificial intelligence (AI) could kill everybody if the technology is not properly regulated like nuclear weapons, MPs have been warned. Researchers told the science and technology committee that AI could pose an ‘existential threat’ to humanity. The MPs […]

To view this video please enable JavaScript, and consider upgrading to a web browser that supports HTML5 video If you’ve got a sensitive stomach, it might be best to look away now after contestant on SAS: Who Dares Wins exposed their trench foot ridden feet. This season another 20 new recruits are being put through […]

Fossils reveal there were monkeys living in the Arctic 52,000,000 years ago