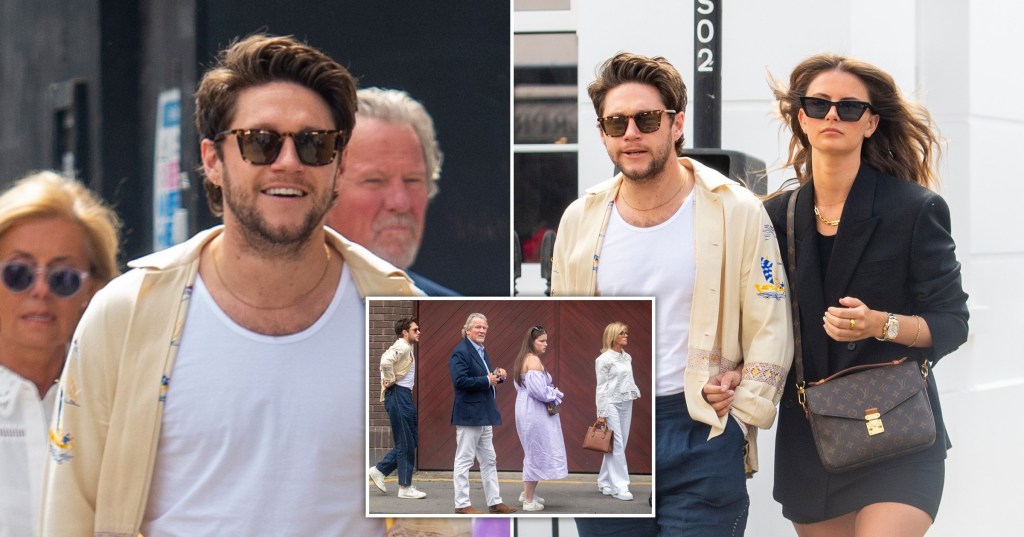 Niall Horan is famously private when it comes to his love life, but the former One Direction star seems well and truly smitten with girlfriend Amelia Woolley.

The Irish singer-songwriter enjoyed a day out in sunny London for Father’s Day, as he was spotted in the sunny capital with the fashion buyer and her parents.

Rumours first surfaced that the gorgeous pair might be an item in July 2020 after they were pictured on a stroll.

Niall and Amelia – who has a first-class degree in fashion business – later made their red carpet debut at the Horan & Rose Gala at The Grove Hotel in Hertfordshire, which Niall hosted in September 2021.

No longer shy about having the world know they’re together, Niall, 28, and Amelia, 24, walked arm-in-arm after a meal in Knightsbridge on Sunday.

The Slow Hands hitmaker was every inch the doting boyfriend as he shared a laugh with his GF and wrapped a protective arm around her.

The pair strolled arm-in-arm as they went out for lunch (Picture: MJ-Pictures.com)

Niall looked ridiculously cool in a pair of loose navy trousers, which had stitching up the leg.

The boyband star paired the bottoms with an open yellow Bode shirt over the top of a white tee.

He kept things casual with white trainers and accessorised with a pair of shades.

As for Amelia, there was no mistaking her fashion credentials, as she donned a chic black ensemble for their outing to Hawksmoor restaurant.

Teaming an oversized blazer with a mini dress and smart loafers, Amelia suddenly became the girl whose wardrobe we seriously need to raid.

Niall joined his GF and her family for a Father’s Day outing on Sunday (Picture: MJ-Pictures.com)

She also carried a Louis Vuitton crossbody bag and finished the look off with gold jewellery.

Brunette beauty Amelia was seen leaving the restaurant ahead of her 1D boyfriend, taking the opportunity to pose for pics outside.

While the adorable couple like to keep their relationship under wraps, this is their second sighting in just a matter of days, after Niall took Amelia to watch friend and former bandmate Harry Styles at his concert in Wembley Stadium.

Amelia posed for Insta pics in her high fashion ensemble outside the restaurant (Picture: MJ-Pictures.com)

The Nice To Meet Ya singer was seen beaming with affection and pride as Harry took to the stage with Love On Tour and his set is bound to have brought back fond memories for Niall, as the Don’t Worry Darling actor belted out the classic that is What Makes You Beautiful.

When speculation about Niall and Amelia’s romance began, a source told Mail Online that he is ‘very serious’ about her after spending lockdown …read more

A large screen shows Russian President Vladimir Putin at the plenary session of the St Petersburg International Economic Forum (Picture: EPA) Vladimir Putin accused the US of playing God and brushed off the West’s ‘blitzkrieg’ of sanctions in a fiery speech delivered in his hometown. Speaking at an economic forum in St Petersburg on Friday, […]