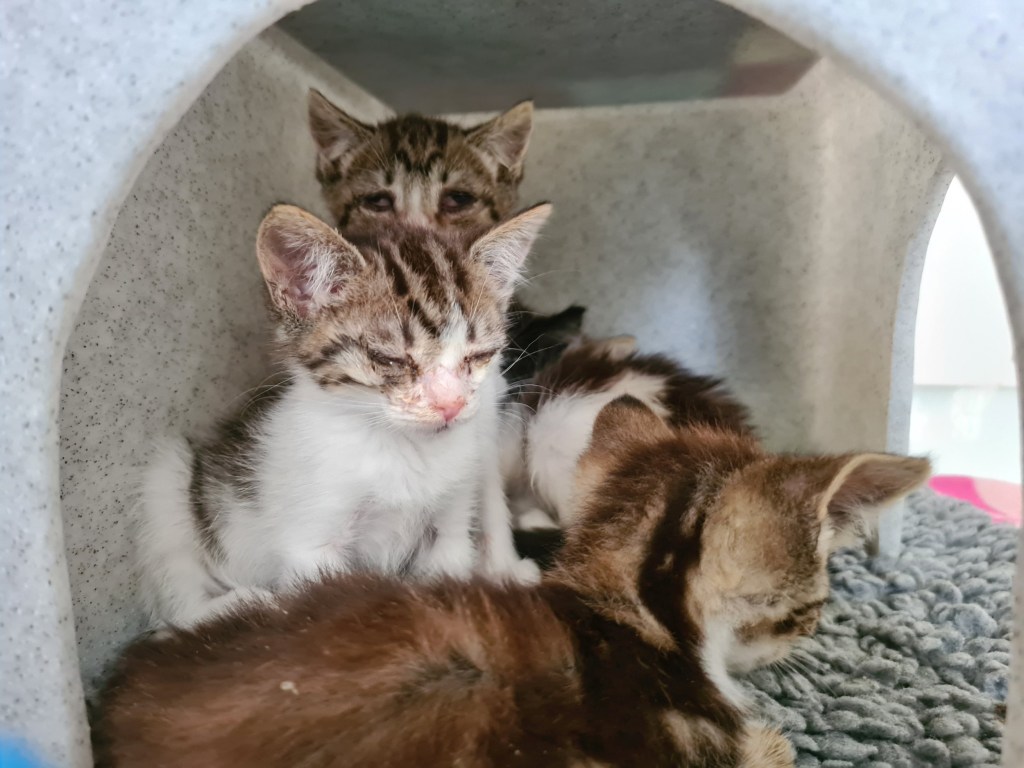 Cat owners are being urged to have their pets vaccinated against a flu strain which can blind them.

Kittens which contract the illness are the most likely to lose their sight completely if it goes untreated.

Symptoms in cats are similar to humans, including sneezing, difficulty swallowing due to a sore throat and a fever.

Cat owners have been warned to be on the lookout for infections around the eyes in particular, an effect of the virus which can cause blindness.

In some cases where the illness becomes very serious, cats may need to have surgery to take the eye out altogether.

Su Taylor, from Wigan, Greater Manchester, adopted three kittens who had to have eyes removed because of flu in August.

Su said: ‘The centre offered lots of helpful advice on taking care of them and they’ve settled in wonderfully and run around like normal cats.

‘Despite having no eyes at all, Team is absolutely fearless and is living her best life, quite often jumping around when a toy isn’t even there.

‘But it’s a real shame they had to lose their eyes as it didn’t need to happen. It’s so easy to get them vaccinated.’

Four-month-old kittens Cherrim and Hattrem came into Cats Protection’s Cornwall Adoption Centre with three other siblings from the same litter, one of which died.

The national pet charity feared they’d need to have their eyes removed but their sight survived thanks to treatment.

Cornwall centre manager Samantha Lawton warned: ‘We’re not sure many people realise that cats can catch flu and that it can be life threatening.

‘Hattrem and Cherrim were lucky we got to them in time and their sight was saved. Often it’s too late and the poor cat has to live with only one eye or none at all.’

Cats Protection is urging pet owners to get their animals vaccinated because flu spreads more easily in the winter months.

Sarah Elliott, the charity’s chief vet, said: ‘Although blind or one-eyed cats can live a normal life, they won’t have depth perception so won’t be able to judge distances or heights very well.

Jack Grealish calls Finlay, 11, after pulling off his goal celebration at World Cup

‘Like humans, cats most likely to be worse affected are the very young, very old or those with a damaged immune system, as they find it more difficult to fight off infections.

‘Although the symptoms might be similar, humans can’t catch cat flu but it’s highly contagious between cats.

‘So, if you have more than one cat, it’s really important to keep them all vaccinated.

‘And if one of your cats …read more

Dementia is a progressive illness (Picture: Getty Images) A new scoring tool has the ability to accurately work out an individual’s dementia risk, according to a recently published scientific study. Lina Ren, from Shenzhen Mental Health Centre in China, developed a point risk score prediction model for dementia with colleagues.  Looking at a variety of […]

Formula One 2022 driver ratings: Max Verstappen a class above the rest

Max Verstappen, centre, Charles Leclerc, right, and Sergio Perez, left, finished 1st, 2nd and 3rd in the 2022 Championship (Photo: Getty) Another season of Formula One has come to an end, and while 2022 was unable to match the previous year’s thrilling title race, it still delivered plenty of action and excitement. Max Verstappen and […]

As the cold weather draws in, those with a long term conditions such as arthritis can struggle more (Picture: Getty) The cost of living crisis is making it even harder for people with arthritis to cope in their day-to-day lives. New research also found that those from lower income areas are more likely to be […]