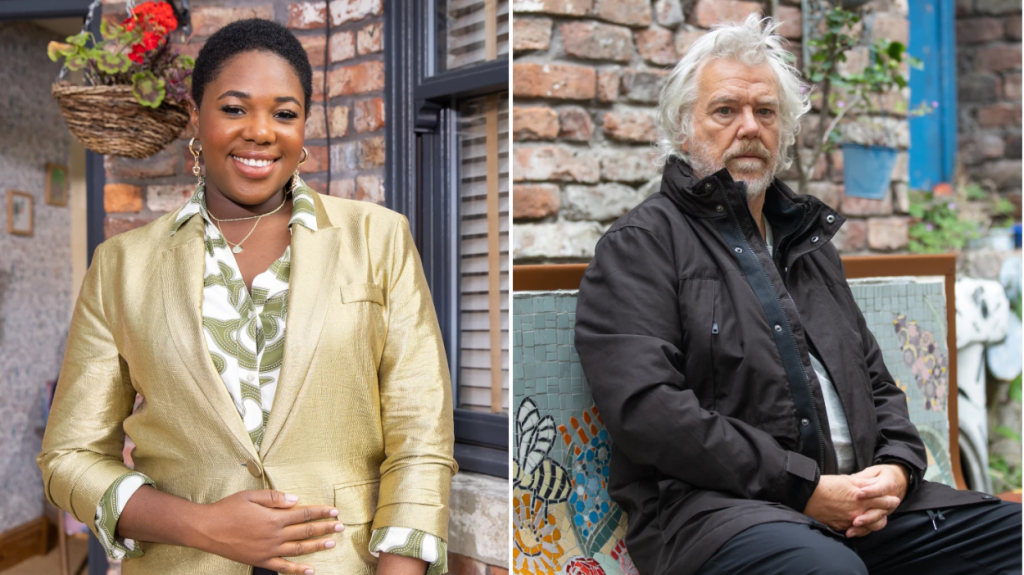 Dee-Dee is a beacon of light (Pictures: ITV)

Dee-Dee (Channique Sterling-Brown) – the final member of the Bailey family – finally arrives in Coronation Street very soon and it isn’t long until she sets about getting involved in a huge storyline.

Dee-Dee will work with Stu (Bill Fellows) as his quest to prove he didn’t kill Charlie Walter continues.

So far, the investigation into Stu’s past has been a difficult one.

The beloved chef is relying on help from Zeedan (Qasim Akhtar), Alya (Sair Khan), Yasmeen (Shelley King) and his former lawyer to find a scrap of evidence that confirms he is an innocent man, but with money tight and the important people in suits charging a lot for their services, it seems the family is taking two steps forward and one step back.

Back home from America, Dee-Dee will be a beacon of light for Stu as she takes over his case and attempts to get him exonerated, as Channique Sterling-Brown explains:

‘She has found a friend in Alya, and they’re delving into Stu’s case and looking to see if I can get him exonerated. I think that’s going to be really exciting for viewers, because obviously, it’s such a big storyline and it’s very gripping and two young women sort of on the detective case, I think it’s really brilliant and it’s exciting to see where that’ll go.

‘She’s a great lawyer, she knows what she’s doing. She’s hot and I just think I relate to her because I think I’m quite similar in that I’m really friendly, but when I’m in the zone when I’m working hard, I’m there. Even the fact she’s a lawyer! I was originally not going to do drama school, and I was going to train in law. I got a place at a law school and everything and last minute pulled out and decided to pursue drama school, and they said to me, “come back to us we’ll work all that acting out your system” and I’m like “well, I’ll show you” and literally here I am on what might be the biggest soap in the country playing this amazing solicitor!

‘Even everything about the way she was described and the way she dresses, that she changes her hair all the time. It’s just so similar to myself.’

Setting foot onto the cobbles for the first time as a daunting prospect, but Channique was also given an extra task of meeting the other stars of the Bailey family, who have all worked together since 2019.

Fortunately, it was all smooth sailing thanks to their warm welcomes.

‘I’ve been so fortunate to come into a family, they just completely embraced me’, Channique said.

‘I mean, before we even shot anything. I came in …read more

Piers Morgan joins in calls for Queen’s pallbearers to be honoured with MBEs: ‘The least we can give’

…read more Source:: Metro        (Visited 10 times, 1 visits today)Calls for ‘hero’ pallbearers who carried Queen’s coffin to be given MBEs The pallbearers could be set to receive a gong if the calls of the nation are listened to (Picture: Getty) MPs, celebrities and military leaders…Viewers ‘on edge’ watching pallbearers carry Queen’s coffin during […]

Eleven lions rescued from Ukraine are airborne and on their way to lush reserves in the US and South Africa after a complex effort involving a number of teams and governments (Picture: Warriors of Wildlife/@wowukr) A group of 11 lions that had been facing a bleak future in Ukraine is being flown to the US […]

‘I lumped my baby with a name that she’d grow up hating’: Is it okay to change your baby’s name?

Baby name experts say changing your child’s name is common (Credit: Getty) Picking a name for your baby is no easy feat. It’s the moniker they’ll be stuck with for the rest of their lives so if you mess it up, it’s a mistake that’ll last a life time. No pressure. Many parents talk of […]