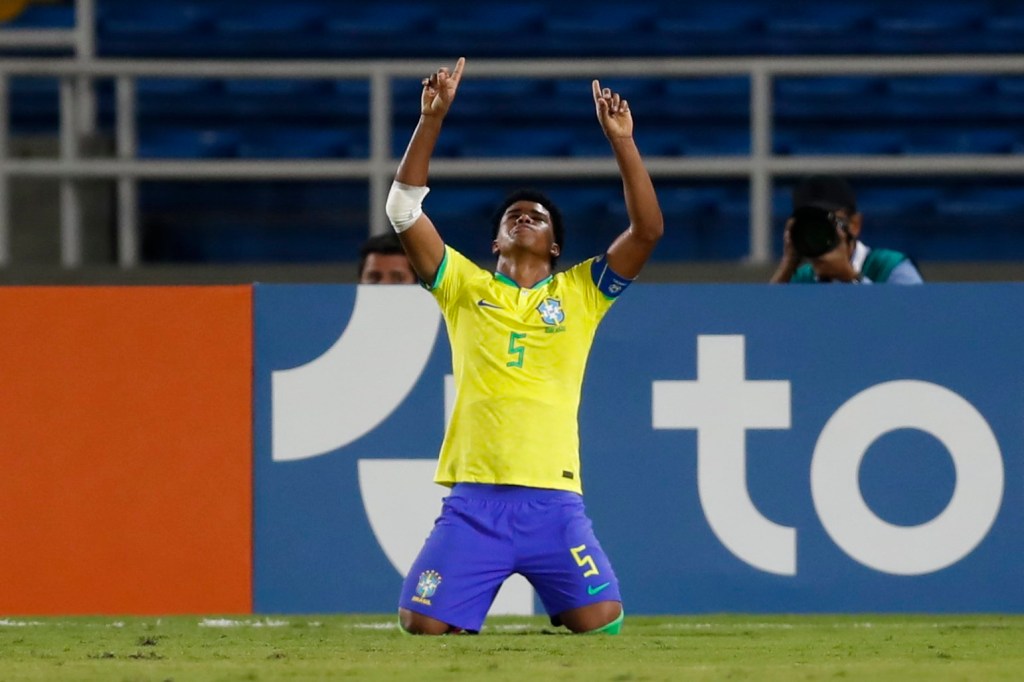 Chelsea’s new signing Andrey Santos gave a rousing speech to his Brazil teammates before their victory over Argentina at the South American Under-20 Championship.

The 18-year-old joined Chelsea earlier this month in an £18 million deal from Brazilian side Vasco da Gama.

But Santos is yet to make his debut for Graham Potter’s side as he is currently with Brazil’s squad for their tournament in Colombia.

The midfielder scored in Brazil’s 3-0 win over Peru in their opening group game and followed that up with a goal and another impressive display in the 3-1 win over Argentina on Monday.

Santos is the current captain of Brazil’s Under-20s and gave a motivational message to his teammates before the win over Argentina.

‘Our time has come, now it’s time to do it on the pitch. Listen, everyone together. F*** whoever they put on the pitch,’ Santos said.

To Brazil’s substitutes, Santos added: ‘Next half you guys will come in and destroy them. Let’s go together and achieve our dreams.’

The 3-1 victory leaves Brazil second in Group A and they are now strong favourites to reach the final stage.

Speaking after the game, Santos said: ‘I’m very happy for where we are in the group, for the team’s performance and my two goals. We are going to stay strong for the next target.

‘We are all happy. We know that the South American Championship is a very difficult championship and in order to achieve our goals, we all have to stick together.

‘Unfortunately, Weverton were injured, but Jean was ready and did it. Let’s rest for our next battle the day after tomorrow.

‘Colombia are a very difficult opponent. I already played against them, a great match, happily we won 3-2 and I was able to score too. But now we are going to rest and study Colombia because we will have a very difficult game in front of us.

‘Brazil, regardless of whether they are in the group, will always try to win and the best way to respect your opponent is to play normal Brazilian football.’

Santos and Brazil play their next Group A game against Colombia on Wednesday.

It’s up for sale (Picture: Jam Press/Roger Davies) An incredible Californian mansion with stunning views of LA has hit the market for £13million. But perhaps the real point of interest is that it’s propped up on 60-foot stilts. Garcia House was designed by renowned architect John Lautner and was originally built in 1962 – though […]

Noah Cyrus risked exposure on the streets of Paris during fashion week (Picture: backgrid) Noah Cyrus made a risky outfit choice in Paris as she donned a revealing gown for the city’s haute couture spring/summer 2023 fashion week on Tuesday.  The younger sister of singer Miley Cyrus turned heads as she stepped out in an […]