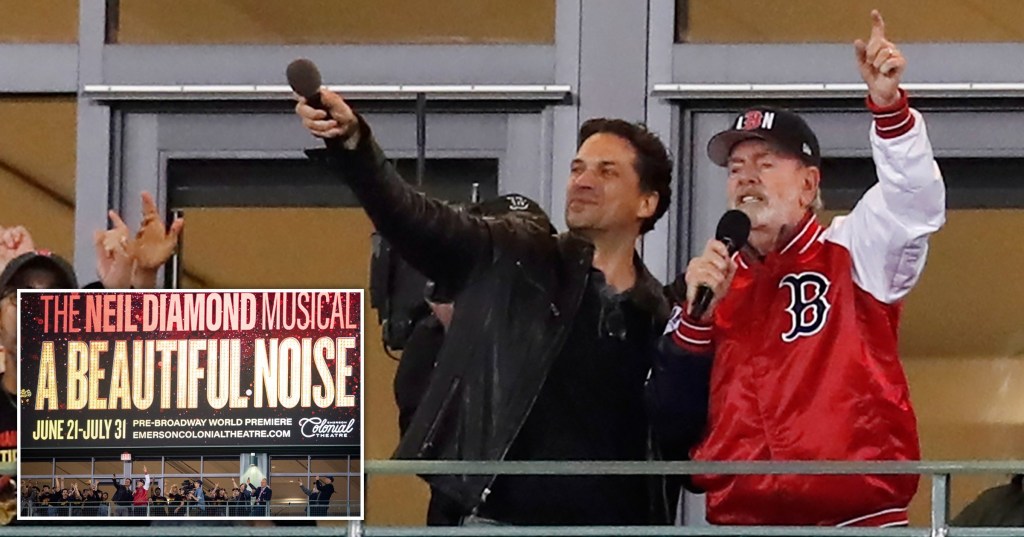 Neil Diamond sent finds wild during a rare live appearance at Fenway Park over the weekend.

The 81-year-old legend last performed the song at the home of the Boston Red Sox came in 2013 just days after the Boston Marathon bombing.

He retired from touring in 2018 due to his battle with Parkinson’s disease, but he returned on Saturday in a very special moment.

The classic track has long been a favourite with the Fenway faithful since it became an 8th inning anthem for the Red Sox in 1997, so it was no surprise the fans joined in with such passion.

The legendary star donned a red Red Sox jacket as he appeared alongside Broadway actor Will Swenson – who will actually play Diamond in upcoming musical A Beautiful Noise.

On Sunday, he tweeted: ‘Thank you @thewillswenson and the cast of @beautifulnoise for joining me in singing last night at Fenway! “Good times never seemed so good!” ‘

Fans were delighted by the performance, and Twitter was flooded with kind words about the truly special rendition.

One fan tweeted: ‘Glad to see Mr. Diamond doing what he does best especially since he’s been battling Parkinson’s.’

Neil Diamond was joined by Will Swenson at the cast of A Beautiful Noise (Picture: AP Photo/Michael Dwyer)

While Will himself said: ‘Had truly one of the most incredible experiences of my life last night. I haven’t quite returned to earth yet. Wow.’

Back in January 2018, Diamond wrote on his website: ‘It is with great reluctance and disappointment that I announce my retirement from concert touring. I have been so honored to bring my shows to the public for the past 50 years.’

He noted Parkinson’s disease ‘made it difficult to travel and perform on a large-scale basis,’ but he intended ‘to remain active in writing, recording and other projects for a long time to come’.

Sweet Caroline saw a resurgence of popularity across England last summer during Euro 2020, when its popularity among football fans saw it re-enter the UK Singles Chart 50 years after its first UK release.

And earlier this month, Sir Rod Stewart performed the track at the Queen’s Platinum Jubilee concert.

If you’ve got a …read more

Sir Paul McCartney is reportedly set to reunite with former Beatles bandmate John Lennon at Glastonbury for a ‘virtual duet’ (Picture: Getty Images) Sir Paul McCartney is set to virtually reunite with John Lennon at Glastonbury Festival for a unique duet. The former Beatles bandmates will hit the stage together at Worthy Farm next week […]

Pokémon McDonald’s Happy Meals are coming back to the UK

Is it too early for the toys to be Scarlet & Violet themed? (pic: Nintendo Life) Happy Meals are getting Pokémon toys again in August, but don’t be surprised if McDonald’s imposes some restrictions. Last year, as part of the celebrations for the Pokémon franchise’s 25th anniversary, McDonald’s landed a special promotion to sell themed […]