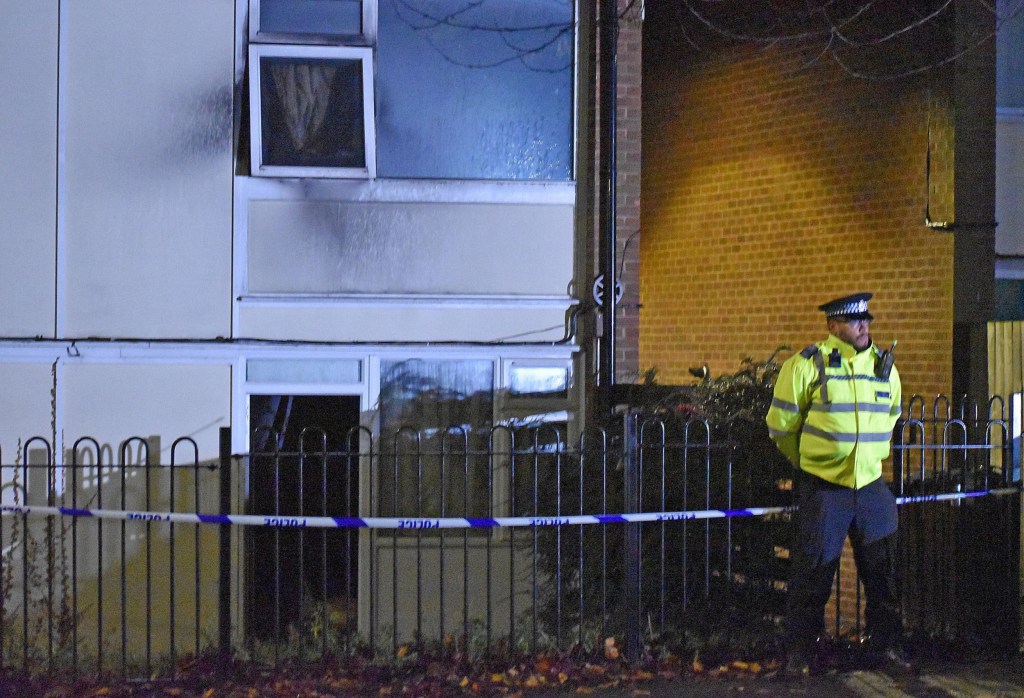 Police at the scene after two children died and a woman died following a flat fire in Nottingham (Picture: PA)

A neighbour of a mum and two young children who died in a flat fire has appeared in court charged with their murders.

Jamie Barrow, 31, from Clifton, Nottingham, was remanded in custody until Monday after making a two-minute appearance at Nottingham Magistrates’ Court on Friday.

He is accused of the murdering Fatoumatta Hydara, 28, and her daughters Fatimah Drammeh, three, and Naeemah Drammeh, one.

All three victims died from smoke inhalation following a severe blaze at their first-floor flat in Fairisle Close in the early hours of Sunday.

Their alleged killer appeared in the dock wearing a plain grey long-sleeved top and jogging bottoms, and spoke only to confirm his name, address and date of birth.

He was not handcuffed during the hearing and stood with his hands behind his back as he watched the clerk of the court read out the charges against him.

Adjourning the case, District Judge Leo Pyle told Barrow: ‘All three allegations you face have to be heard at the Crown Court and accordingly I am sending all three of these matters to the Nottingham Crown Court.

‘There is no right for a bail application to be made before this court and accordingly I remand you in custody.’

Nottinghamshire Police charged Barrow with three counts of murder on Thursday, four days after he was arrested.

Assistant Chief Constable Rob Griffin, of Nottinghamshire Police, said: ‘Our thoughts remain with the family at this incredibly painful time, as well as the communities that have been affected by this most tragic of incidents.

‘The grief this family has been put through is incomprehensible.

‘Large teams of detectives have been working relentlessly alongside specialist search units and forensic experts to understand the full circumstances behind this deliberate fire.

‘Following those inquiries, we have charged a suspect with three counts of murder. The family are aware of this development, and I would like to sincerely thank them for their patience and understanding as we do everything we possibly can to gain justice for Fatoumatta, Fatimah and Naeemah.’

Balloons, flowers and other tributes left outside the flat in Clifton (Picture: PA)

In a statement issued on Wednesday, Fatoumatta’s husband, Aboubacarr Drammeh, paid tribute to his loved ones and described their deaths as inconceivable.

Mr Drammeh, who flew back from the US after the fire, said: ‘It is with great sadness that we have lost Fatoumatta and our two daughters in such a tragic way.

‘Fatoumatta had lived a short but a very beautiful and fulfilling life.

‘A former voluntary worker, Fatoumatta was a very happy, bubbly woman who wouldn’t have the heart to hurt a fly.’

Jack’s out of his depth (Picture: BBC) Amy Mitchell (Ellie Dadds) has it out with dad Jack Branning (Scott Maslen) in EastEnders next week, ordering that he stay out of her life for good. The teen, as viewers know, is currently at the centre of a storyline dealing with her mental health, and Jack makes […]

Iran players are under intense pressure as they go into their second World Cup group game against the USA amid a backdrop of unrest in their homeland (Picture: Getty) Iranian footballers are under surveillance from secret agents who have been sent out to the World Cup to watch their movements from the sidelines, according to a prominent human rights […]