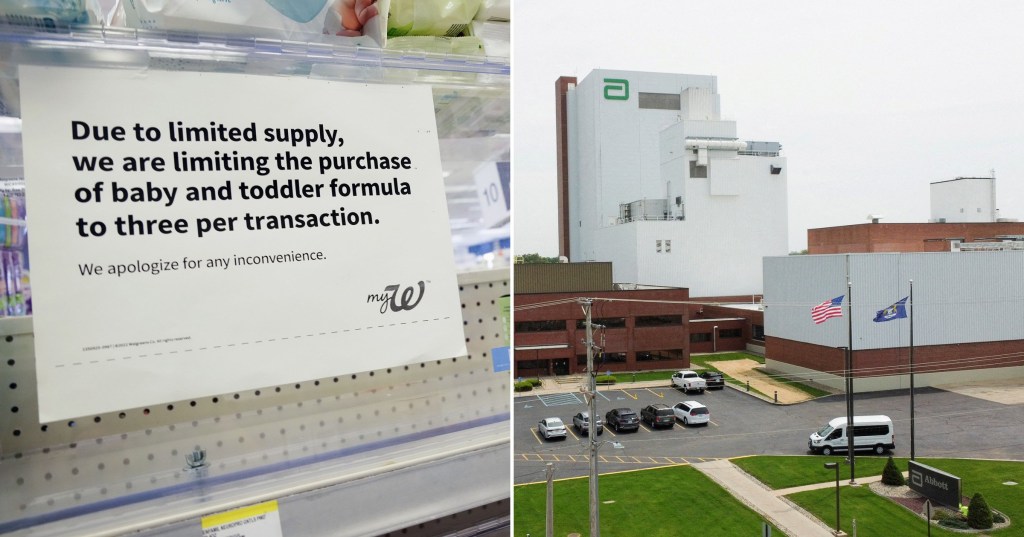 Severe storms have caused the Michigan baby formula factory that closed for months earlier this year to shutter once again (Pictures: REX / Reuters)

Severe flooding has halted the production of baby formula at a Michigan factory that contributed to a nationwide shortage after being closed for several months.

In a statement Wednesday, Abbott Nutrition said that it stopped producing EleCare and other specialty formulas after severe storms flooded parts of the manufacturing plant.

‘Severe thunderstorms and heavy rains came through southwestern Michigan on Monday evening, resulting in high winds, hail, power outages and flood damage throughout the area,’ the company said in a statement Wednesday night.

‘These torrential storms produced significant rainfall in a short period of time — overwhelming the city’s stormwater system in Sturgis, Mich., and resulting in flooding in parts of the city, including areas of our plant.’

‘As a result, Abbott has stopped production of its EleCare specialty formula that was underway to assess damage caused by the storm and clean and re-sanitize the plant. We have informed FDA and will conduct comprehensive testing in conjunction with the independent third party to ensure the plant is safe to resume production.’

The company estimates that production and distribution would be delayed for a few weeks until the damage is repaired and the factory is cleaned.

Abott has said that is has ‘ample existing supply’ of EleCare and other formulas to hopefully meet the demand.

Production at the plant restarted less than two weeks ago after a months-long closure caused by reports of illnesses among children and the deaths of two infants.

The company has since said that there is no evidence linking its products to the deaths or illnesses.

On Twitter Wednesday, US Food and Drug Administration Commissioner Dr Robert Califf said the agency would be back at the facility at a later date to check on the progress.

‘We know Abbott is working quickly to assess the damage and will be reporting its progress to us in the days ahead,’ he wrote. ‘Once the company establishes a plan, FDA will be back in the facility working to ensure that they can restart producing safe and quality formula products quickly.’

Rishi Sunak said the first chunk of money will be paid on July 14 (Picture: Getty/PA) Millions of homes across the country will start receiving their £650 cost of living payments from next month. Rishi Sunak said more than eight million of the UK’s lowest income households will get their first instalment of £326 to […]

Cool down with a coffee (Picture: Costa/Metro.co.uk) Temperatures are rising and this weekend is set to be a scorcher. When hot weather comes all we ever want is an ice-cold drink to cool our bodies. Over the coming days our cravings for one will be stronger than ever and Costa Coffee is on hand to […]

How to get rid of that Sunday night dread

90% of Millennials and Gen Z experience the ‘Sunday Scaries.’ (Picture: Metro.co.uk/Getty) Do you get a growing sense of dread every Sunday evening? That feeling in the pit of your stomach as you grow anxious about the working week ahead? Well, you are not alone. According to a 2018 LinkedIn survey, 80% of professionals say […]