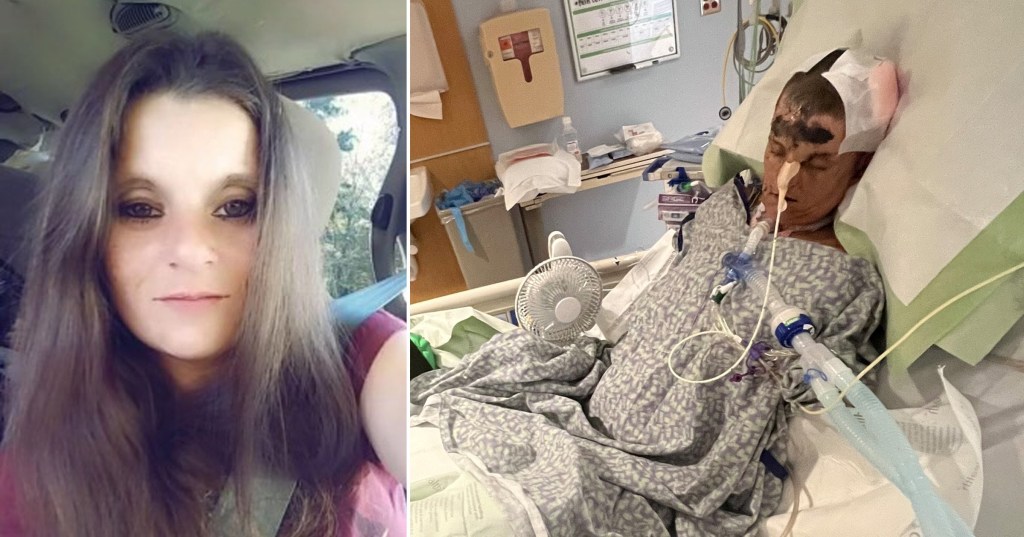 Kyleen Waltman was in a hospital for seven weeks after three dogs bit her head, arms, legs and colon (Pictures: Amy Wynne/WYFF)

A mother-of-three was viciously scalped and had both of her arms ripped off by two pit bulls and a German shepherd.

Kyleen Waltman, 38, was walking home from her boyfriend’s house when the three dogs attacked her in Abbeville County, South Carolina. Waltman lost consciousness as the dogs bit her skull until it was visible, her eyelids and chewed her colon.

A local farmer, Avery Presley, shot a gun into the air and kicked one of the dogs off to save her.

Waltman suffered life-threatening injuries from the March 21 attack and spent seven weeks in a hospital. Her arms were amputated and she had a colostomy to treat injuries to her colon. Her shoulder bones were also removed, meaning she may not be able to have prosthetic arms.

Doctors could not stich up her scalp and forehead for a month because they had to wait for an infection from the dig bites to go away. She underwent more than a dozen surgeries and speaks with a voice-generated box because she lost her vocal chords.

Waltman returned home on Mother’s Day, according to her sister, Amy Wynne.

‘It’s been rough, but we’ve been trying to get her settled into her new life,’ Wynne, 41, wrote on a GoFundMe page for her medical expenses.

‘She is a talker, lol… She is running our poor mama raged [sic] as the least.’

However, the pain is not over for Waltman. She is due for multiple outpatient surgeries including getting grafts on her leg to prevent her from losing it.

Waltman’s leg ‘is healing, but they have to pull her muscle up from her calf and see if that is gonna work,’ Wynne said. ‘They did graft around the (wound) to see if it’ll take, and it did.’

She already had a three-hour surgery to re-graft her shoulder, and the leg operation is expected to last nine hours.

Waltman was denied Medicaid and disability coverage for an in-home nurse, so her 61-year-old mother Diane Johnson has been caring for her.

‘We have to do it all for her,’ Wynne wrote. ‘Mama takes the brunt of it because Kyleen lives with mama.’

The dogs were euthanized after the attack, according to People. Their owner, Justin Minor, 36, faces multiple criminal charges.

To view this video please enable JavaScript, and consider upgrading to a web browser that supports HTML5 video Loose Women viewers have blasted Monday’s interview with Sir Keir Starmer after he joked he was warned about appearing on the show. The Labour leader joined Ruth Langsford, Linda Robson, Brenda Edwards and Jane Moore on Monday’s […]

My days were soon filled with long lunches and lavish shopping trips in designer boutiques (Picture: Getty Images) I woke up on Mother’s Day 2011 and went to my usual 10-4 Sunday shift in a coffee shop.  I was 11 minutes into making lattes and clearing tables, when my manager called me over to say […]