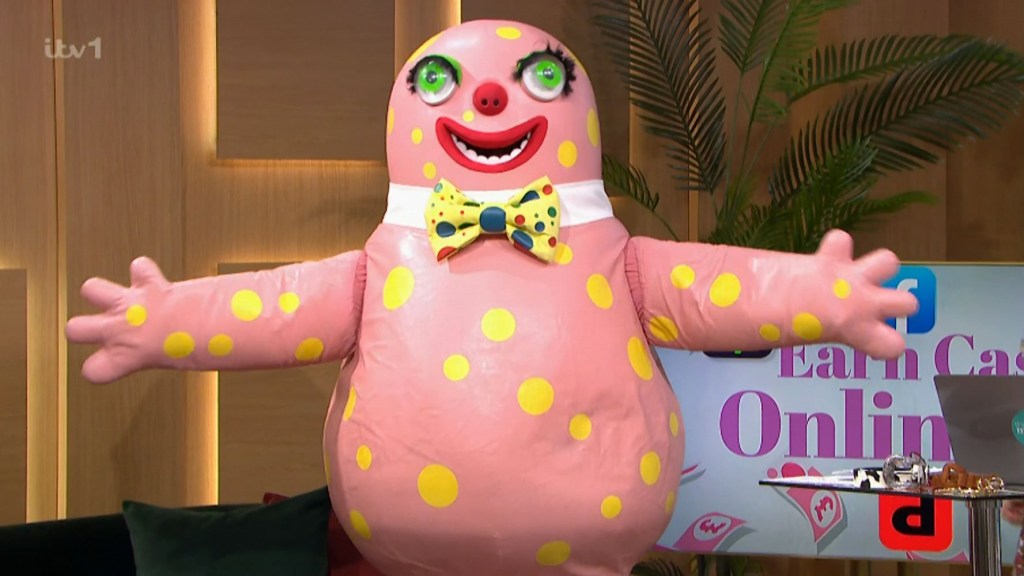 Mr Blobby made a surprise appearance on This Morning and caused absolute chaos with a whirlwind cameo.

The beloved/feared children’s TV character left his signature brand of destruction in his wake as he popped onto the set as Alice Beer was talking about her segment on selling things online after one of his original costumes went up on eBay last week for a huge sum.

As if on cue, Blobby stumbled into the studio, taking a vase off Alice’s table and smashing it on the ground before shuffling over to hosts Holly Willoughby and Phillip Schofield.

He gave Holly a huge hug before turning his attention to more props, and the presenter was delighted by the unexpected surprise.

‘I’ve never missed Mr Blobby before and I’m really excited. He was my Gangnam Style, he was my Baby Shark,’ she gushed.

Blobby wasn’t done there, as he interrupted Carol Vorderman as she tried to introduce her phone-in and went in for a hug before he started blocking the camera.

A different Twitter user hailed Blobby as a ‘hero’, while another added: ‘Naughty Mr Blobby! 😄👍’

The appearance comes after an eBay listing for an original 1990s costume is already up to a leading bid of £61,000 as fans look to own a unique piece of history.

Holly was delighted to get a hug from her hero (Picture: ITV0

Blobby then turned his attention to Carol Vorderman (Picture: ITV)

The seller noted that a house move means its time to find Blobby ‘a new home’, although they have also included a word of warning for any budding entrepreneurs already getting ideas.

They added: ‘Mr Blobby is trademarked, and therefore subject to copyright. This costume/prop can only be for personal home display use.

‘There can be no unauthorised use – including but not limited to hiring out, lending, public exhibition or any performances. The buyer will be required to sign their agreement of this.’

Having first appeared alongside Noel Edmonds on the likes of Noel’s House Party, Blobby went solo and famously showed up in the video for Peter Kay’s charity hit Is This the Way to Amarillo in 2005.

Created by comedy writer Charlie Adams, the character was initially played by Barry Killerby until 2015, and for the last seven years its been Paul Denson inside the costume.

This Morning airs weekdays at 10am on ITV1.

Six years later and Nintendo thinks the Switch is still too popular to retire just yet (pic: Nintendo) Reports of Nintendo planning to keep pushing the Switch this year support claims that its next console isn’t due until at least 2024. With the console coming up to its sixth anniversary, you would think Nintendo would […]