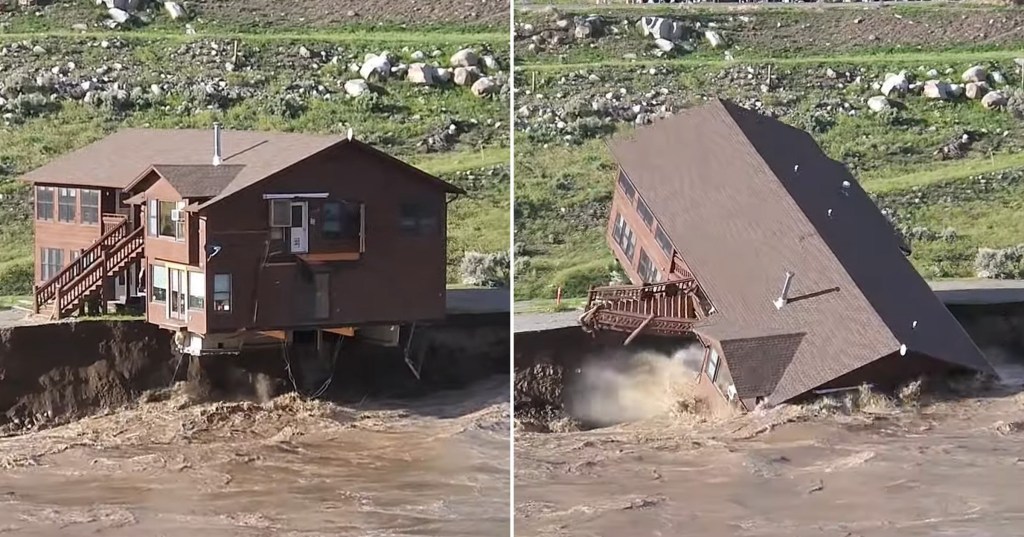 Shocking video shows the moment a waterfront home was swept into the Yellowstone River after historic rainfall flooded waterways in the region.

The Gardiner, Montana home fell when a rapid stream of water appeared to cause its stilts to snap on Monday, following a weekend of severe storms in the region that have wrecked havoc on the small gateway towns outside of Yellowstone National Park.

Video footage shows the home appearing to tip toward the water before it gets swept into its current and floats down the river.

‘That is insane. Holy s—,’ a man in the video can be heard saying.

The large brown house can be seen getting knocked off its stilts before being swept down the stream (Pictures: Viralhog)

The large brown house, owned by TJ and Victoria Britton, is just one of many homes outside of Yellowstone National Park that have ben impacted by record levels of rainfall and massive floods.

All entrances to the park, which goes through parts of Montana, Wyoming and Idaho, have been closed since last weekend.

The Brittons watched their home of 16 years fall into the river on Monday.

‘It was a long drawn out (process),’ TJ told CNN. ‘My canoe, my boat fell in. Part of the garage was hanging out. The concrete pad in front of the house was gone. And then the garage fell off. The decks fell off. And the house eventually.’

The couple saw their home floating down the river from off the highway (Picture: Viralhog)

TJ had been picking up supplies at a friends house when their family home first started to slip into the river.

He and his wife said they noticed a crowd gathered near the guardrail when the got to the highway and pulled over to find that their home had been swept away.

‘And right around the corner of the river came my house,’ TJ said. ‘That was the weirdest thing I ever saw in my life.’

While most people have been supportive of the couple as they navigate the strange and upsetting situation, they also encountered a group of tourists who were bizarrely ‘applauding and cheering when (their) house was floating down the river.’

Many homes outside of Yellowstone National Park have been impacted by the massive amounts of rain that has hit the region (Picture: Viralhog)

‘That was frustrating,’ Victoria told CNN. ‘We heard a few people have some uncompassionate, unsympathetic things to say as we’ve been sitting there just waiting for our whole entire life to fall into the river.’

Over three days last week, Yellowstone National Park received about two to three times the amount of rainfall it usually gets for the entire month of June, causing massive destruction throughout the region.

At one point, the Yellowstone River swelled …read more

The rolling walkouts will add to the huge backlog of cases stuck in the court system (Picture: LPN/REX/Shutterstock) Courts could grind to a halt next week after barristers voted to go on strike. The Criminal Bar Association (CBA) said its members in England and Wales will walk out over a dispute about legal aid funding. […]

The Big Happiness Interview: How to reject toxic masculinity and be a happier dad Pastel power suits to channel Kate Middleton’s Royal Institution look Tired of getting drunk on dates? These tips might help Is sensory deprivation the key to tackling stress and anxiety? I tried to find out I’m not too young to be […]

After being called ‘exotic’ and ‘tropical’ on dates, I’ve got White Guy Fatigue

I wasn’t acknowledged as a human being in my own right (Picture: lailawoozeer.com) ‘White Guy Fatigue’: The act or process of becoming disillusioned with dating white men, usually occurring over many years of lacklustre and/or problematic shenanigans involving white men. It’s a condition I’ve realised I suffer from – but I didn’t always feel this way. Growing […]