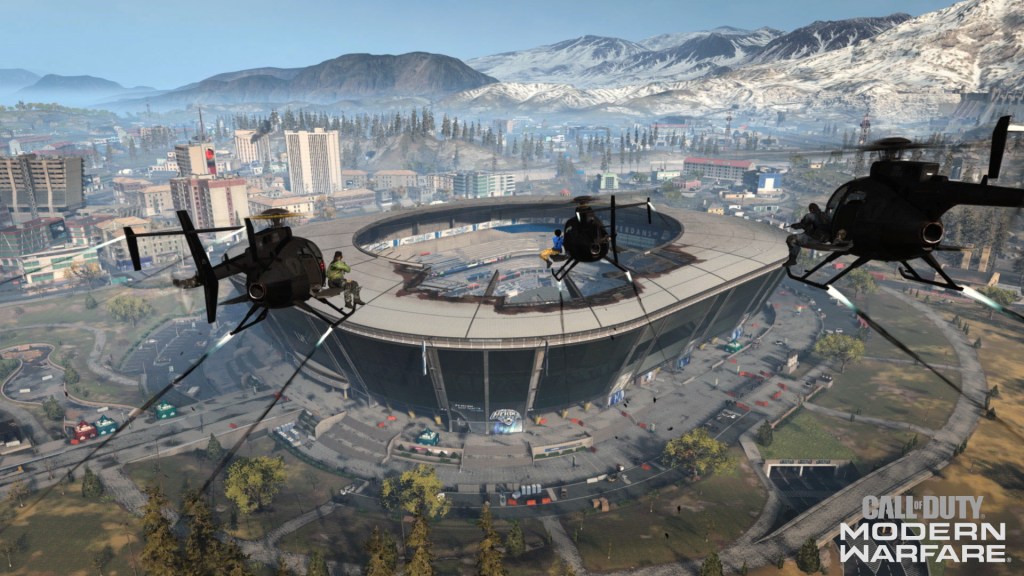 If the World Cup was taking place in the COD-verse, we imagine it’d look something like this (pic: Activision)

You can earn World Cup themed freebies on Call Of Duty: Modern Warfare 2 through the newly launched Support A Team event.

After star footballers Neymar Jr, Paul Pogba and Lionel Messi were revealed as operators in Modern Warfare 2, the game is now launching a World Cup special.

The competition is set to conclude on December 18 but there are leaks that Modern Warfare 2 will also get another special mode, named COD Ball, which you can try during the multiplayer’s rumoured free access weekend.

Now, the Support A Team event takes the form of a prediction challenge which will reward you with some World Cup themed freebies if you make a correct guess.

It’s kind of like a harmless version of sports betting, so don’t expect your winnings to be as crazy as Twitch streamer’s Trainwreckstv £1.3 million from betting for Saudi Arabia.

The Support A Team event runs from Wednesday, November 23 until Friday, December 2, so you’ll get the chance to predict six games in total.

The England vs. USA match on Friday, November 25 is the first one you can take your bets on, so here’s how you can prepare:

Launch either Modern Warfare 2 or Warzone 2

Once you’re on the COD HQ screen, scroll down to Modern Warfare FC

Choose which team you believe will win each match

Once you lock in your choice, there’s no going back, so if you want to win any rewards you better do your research in advance.

Predicting each match’s winner is where the money’s at (figuratively in this case) as it will earn you the country’s flag as an animated calling card, which will also play a remixed version of its national anthem.

Support a Team is now live

A draw will reward you with the same freebies as if you’d won, so it’s not a bad outcome, unless your favourite country is playing.

Unfortunately, there’s no consolation prize if you predict wrongly, just like the real World Cup.

Arsenal beat Wolves on Saturday to go five points clear at the top of the league (Picture: Getty) Ian Wright has revealed how Arsenal stars reacted to Manchester City’s shock defeat to Brentford at the Etihad Stadium on Saturday. Pep Guardiola’s champions were stunned 2-1 by the Bees in the early kick-off – losing their […]

This would be a much-wanted child (Picture: Getty Images) As I saw the positive sign show up on my ClearBlue pregnancy test, it should have been a happy moment.  As a mum to an 18-month-old little girl, I wanted to be filled with joy at the idea of my family growing. But all I felt […]

Woman survives on diet of biscuits due to rare stomach condition

Talia has gastroparesis a little-known long-term condition (Picture: Joseph Walshe/SWNS) Talia Sinnott eats up to ten digestive biscuits and plain crackers a day because it’s the only food she can keep down. The 25-year-old suffers from gastroparesis, a chronic illness which means her stomach struggles to process food. She was diagnosed with the rare condition […]