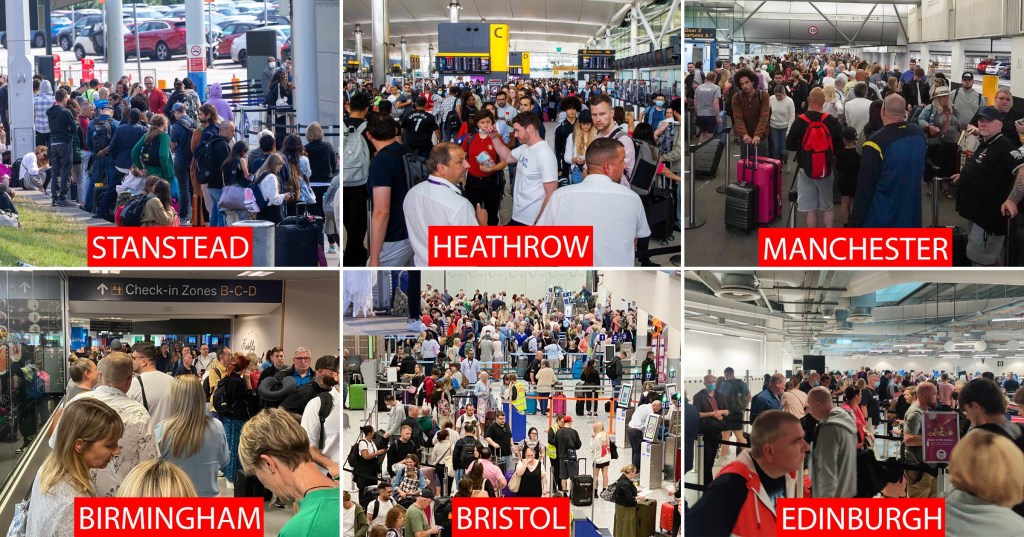 Passengers looking to get abroad are still being plagued with long queues across major airports such as Manchester, Bristol and Birmingham.

Check-in queues reportedly stretch back ‘three lengths of the airport’ and disruption is expected to continue after BA staff decided to strike this summer.

700 members of staff are set to walk out during the peak travel period, which runs from mid-July to the beginning of September.

Workers, including check-in staff, are yet to decide on exact dates, but holidaymakers have been warned to expect significant disruption.

Today, photos across social media show the large queues across major airports across the country.

At Birmingham Airport, queues could be seen spiralling out of the terminal to the outside area.

One passenger at Birmingham tweeted today: ‘Congratulations Birmingham Airport, you now have a queue that folds three lengths of the airport! Second time this week you have failed your #SLAs [service level agreements].’

Congratulations @bhx_official you now have a queue that folds three lengths of the airport! Second time this week you have failed your #SLAs pic.twitter.com/6XaK0ereou

In relation to the BA strike, GMB national officer, said: ‘With grim predictability, holidaymakers face massive disruption thanks to the pig-headedness of British Airways.

‘BA have tried to offer our members crumbs from the table in the form of a 10 per cent one-off bonus payment, but this doesn’t cut the mustard.

‘Our members need to be reinstated the 10% they had stolen from them last year with full back pay and the 10% bonus which other colleagues have been paid.

‘GMB members at Heathrow have suffered untold abuse as they deal with the travel chaos caused by staff shortages and IT failures.

Manchester Airport where passengers were seen queuing in their masses at TUI check-in (Picture: Zenpix Ltd)

‘At the same time, they’ve had their pay slashed during BA’s callous fire and rehire policy. What did BA think was going to happen?

‘It’s not too late to save the summer holidays – other BA workers have had their pay cuts reversed.

‘Do the same for ground and check-in staff and this industrial action can be nipped in the bud.’

Police are searching for a scooter rider involved in hit-and-run of two-year-old boy in the Lower East Side (Pictures: New York Police Department) A man riding a scooter struck and injured a two-year-old boy and fled after the hit-and-run. Police are searching for the scooter rider who hit the toddler as the boy was crossing […]

The 2022 Championships will be Barker’s last year presenting (Picture: Getty Images) Tennis fans were given a scare on Monday morning as the BBC’s Wimbledon coverage kicked off without Sue Barker – who has been ever-present at the tournament for the past 30 years. Instead, former cricket player and presenter Isa Guha opened the coverage […]

Justin Bieber has postponed his upcoming shows to focus on his recovery (Picture: Getty/Instagram) Justin Bieber has been forced to postpone the remaining US dates of his Justice World Tour amid his ongoing recovery from facial paralysis.  A statement was released via the tour’s official Instagram account, which said that while the upcoming shows in […]