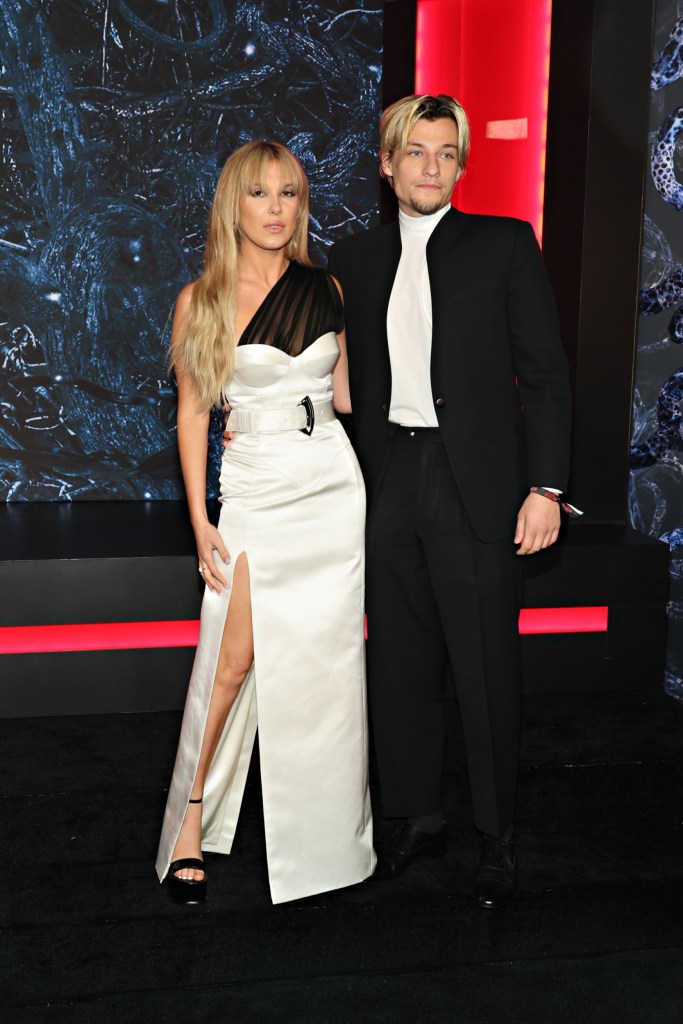 Millie looked stunning in a white gown with boyfriend Jake by her side (Picture: Getty)

Millie Bobby Brown stunned on the red carpet of the Stranger Things season 4 premiere in New York where she debuted her new locks, as she posed beside her co-stars and boyfriend Jake Bongiovi.

The 18-year-old looked stunning in a white satin gown with a black mesh shoulder and high-leg split next to her 20-year-old boyfriend, the son of Jon Bon Jovi.

Millie was joined by her Stranger Things co-stars including Winona Ryder, Finn Wolfhard, Noah Schnapp and Natalia Dyer, all looking equally as glam.

Maya Hawke and Natalia donned black gowns, while Winona opted for a three-piece suit as she posed with her boyfriend Scott Mackinlay Hahn.

Millie looked stunning in a white gown with boyfriend Jake by her side (Picture: Getty)

We can’t wait for the new series! (Picture: Erik Pendzich/REX/Shutterstock)

The Hawkins gang back together! (Picture: Getty)

The three other members of the Stranger Things Hawkins gang, Finn, who plays Mike Wheeler, Noah, who plays Will Byers, and Caleb McLaughlin, who plays Lucas Sinclair, also looked chic in suits, with Caleb sporting a dalmatian print with snakeskin boots.

David Harbour, who plays Jim Hopper, attended with wife Lily Allen, and posed with Millie on the red carpet in a sweet pic of the two hugging.

David wowed in a unique Stranger Things suit, with imagery of the Netflix series embroidered onto his piece.

The premiere comes ahead of Stranger Things season four dropping on Netflix in a few weeks.

The thrilling sci-fi series will follow a new ‘war’ for Eleven and the rest of the Hawkins gang, and, nearly three years since the last season, this time around it looks to be just as scary as we’d expect, with a new gruesome villain known as Vecna.

Millie previously admitted that this season was ‘the hardest to film.’

‘This has definitely been the hardest season I’ve ever filmed,’ she told Collider.

We love the dalmation! (Picture: Getty)

‘And there have been some of the scariest things that I’ve ever seen as a human, which you guys will get to see for sure.

‘I’ll get to tell more stories and touch on my experiences as a person filming on the set with these legitimate scary things.’

Simon hit a nerve (Picture: GB News/REX) Piers Morgan has blocked former GB News presenter Simon McCoy after the pair clashed over TalkTV’s crumbling ratings. Despite putting himself forward as the poster boy to end cancel culture, Piers abruptly shut down a discussion with Simon when he called out the former Good Morning Britain host […]