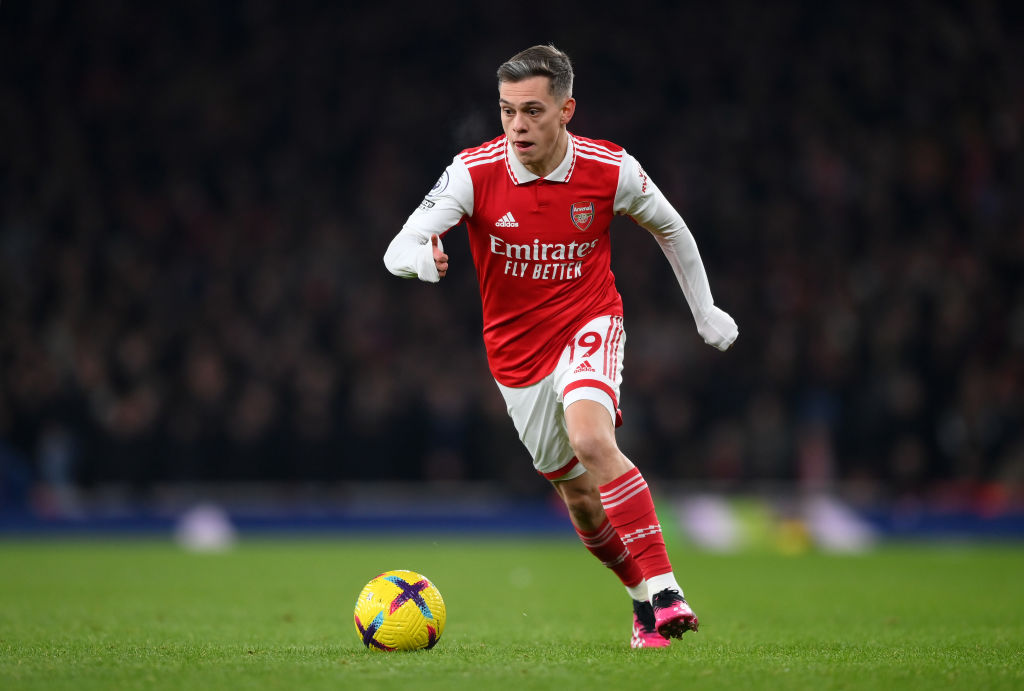 Leandro Trossard made his Arsenal debut in the win over Man Utd (Photo: Getty)

Mikel Arteta has hailed the impact of his two new Arsenal players Leandro Trossard and Jakub Kiwior ahead of the big clash against Manchester City.

Arsenal travel to the Etihad on Friday night in the FA Cup fourth round in what will be the first meeting of this season’s two Premier League title rivals.

The Gunners are five points clear of the Citizens in the table, with a game in hand, and many believe Arteta’s side have what it takes to end the club’s 19-year wait for a league title.

This belief is especially more prevalent after Arsenal’s last game where they came from behind to defeat Manchester United 3-2 at the Emirates.

Many players were lauded for their role in the win including Eddie Nketiah, Bukayo Saka, Martin Odegaard and Thomas Partey.

But Arteta reserved special praise for Trossard who made his Arsenal debut late on in the game following his £20million move from Brighton, and was involved in the build-up to Nketiah’s late winner.

‘Straight away he had a beautiful impact on the team to help us to win,’ the Gunners manager said in his pre-match press conference on Wednesday.

‘That’s what I like. I see a player that is willing to make things happen and he is especially composed in the final third and is something we needed to add to the team.’

Trossard is not the only new player in north London, with versatile defender Kiwior arriving from Serie A side Spezia, also in a deal worth £20m.

And Arteta is delighted to have added the Poland international to his squad as they look to keep their title challenge going, adding: ‘We’ve been with three central defenders for the first part of the season which is very short, and we’ve been lucky with injuries.

‘We needed to recruit in that position and we’ve done it. Jakub plays different roles and is a versatile player, and he’s going to strengthen the team. If anything else is available that can make us better, we’ll look at it.

‘We need some more cover in midfield ideally if we can, but in this market, it is pretty complicated to do that. As I always say, the most important thing is that we get the performances and the time on the pitch that we need with the players that we have available today that are already really good.’

Jofra Archer is training well in Bloemfontein, South Africa (PIcture: Alex Davidson/Getty Images) Jofra Archer is enjoying playing cricket without having to worry about his body failing him, as he prepares to make his England comeback and turns half an eye towards the Ashes. Archer’s most recent international outing was almost two years ago, in […]

Sylvain was still able to perform on Sunday despite the accident (Picture: ITV) Dancing On Ice star Sylvain Longchambon had to head to hospital after an accident in rehearsals that saw him smash face-first onto the ice. The long-time skating pro, 42, was luckily still able to skate in Sunday’s live show with celebrity partner […]

Joanna Hepworth is murdered by Faisal Bhatti in Happy Valley (Picture: BBC/Lookout Point) Happy Valley star Mollie Winnard has opened up about the brutal murder of her character Joanna Hepworth and why her death had to be changed. The Coronation Street actress, 25, joined the Sally Wainwright drama for its final instalment, playing the abused […]