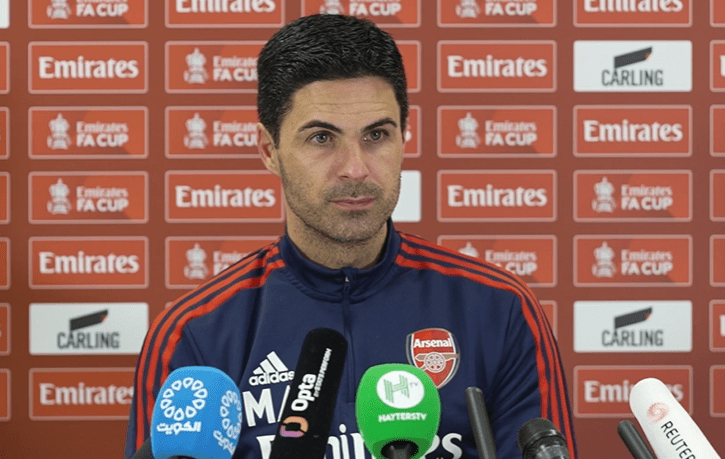 Mikel Arteta admits his squad are short of options in central midfield and hopes the club address that area of concern in what remains of the January transfer window.

Poland international Kiwior is nominally a central defender and although he has the ability to play in central midfield, he has primarily been recruited to provide competition to Gabriel Magalhaes.

Arteta has been heavily reliant upon Granit Xhaka and Thomas Partey in central midfield this season and an injury to either could undermine the record-breaking start the Gunners have made to their Premier League campaign.

Sambi Lokonga has struggled to make an impact on the rare occasions he has featured in the Premier League, while the experienced Mohamed Elneny has suffered a knee injury that could, according to reports, rule him out until the end of the season.

‘I don’t think he will be (available for Manchester City,’ said Arteta at his pre-match press conference. ‘Obviously he had some issue in his knee that we are assessing at the moment and I will have to see how he evolved in the next couple of days.

‘There are concerns because Mo is a player that never complains about anything but let’s see.

Mohamed Elneny is facing a significant spell on the sidelines (Picture; Getty)

‘We need more cover in midfield ideally if we can but obviously in this market it is pretty complicated to do that. As I always say the most important thing is that we get the performances and the time on the pitch today with the players that we have that are already very good.’

Arsenal are understood to have identified Declan Rice as their No.1 summer target but have little hope of bringing that deal forward, while the current league leaders have also been credited with an interest in Everton’s Amadou Onana.

The Gunners are also reported to be monitoring the situation of Moises Caicedo at Brighton, but are likely to be priced out of the race to sign the Ecuador international given his £100million price tag.

Cocaine dealer rumbled after magnetic box discovered beneath his car

The drug box was found fitted under the dealer’s Fiat Punto (Picture: Kent Police) A drug dealer has been jailed after nine bags of cocaine were found stashed in a magnetic box fitted underneath his car. Aloisios Varthalitis, 24, was driving his Fiat Punto through Tonbridge, Kent, when he was pulled over by officers who […]

Shazia Hussain was the latest candidate to leave the process after an astonishing mistake (Picture: PA) Lord Alan Sugar let go of a fifth candidate in Thursday night The Apprentice episode and this time it was London-based technology recruiter Shazia Hussain.  The budding business partners and entrepreneurs were tasked with branding an electric motorbike and […]

Channing Tatum and Salma Hayek bust some serious moves at Magic Mike live tour: ‘We had a blast’

Channing Tatum and Salma Hayek enjoyed a night out at the Magic Mike Live Show (Picture: Eric Charbonneau/ Shutterstock) She might have been able to get down and dirty on screen with Magic Mike himself Channing Tatum, but Salma Hayek has taken her co-star to the live show to see his competition. The third and […]