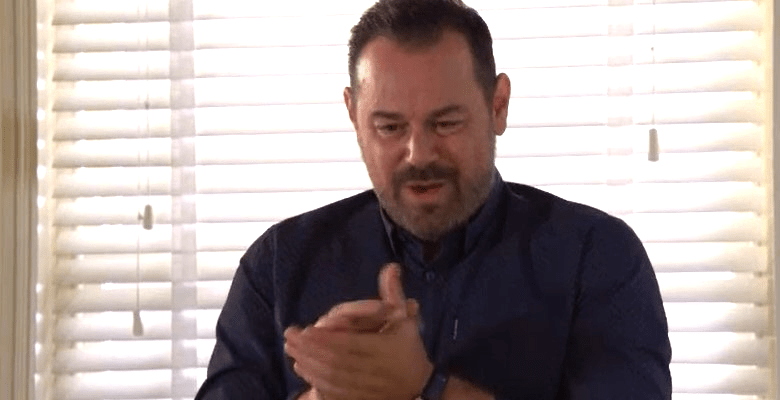 Not sure if we were watching EastEnders or football pundits (Picture: BBC)

EastEnders has an admirable track record of giving a nod to current events, so it was always expected that they would give a nod to the opening of the World Cup – and England’s match with Iran.

Sure enough, Danny Dyer’s character Mick Carter was on the task within the first thirty seconds as he lamented the ‘kick up the nuts’ the team had received four years ago.

And while he acknowledged the win of the Lionesses at the Euros, he declared that it was now time for it to come home for the men’s team.

Okay, a little cringe and potentially contentious given the many more deeper issues than football with FIFA opting for the tournament to be held in Qatar, but at least they got it out of the way from the off so the episode could return to normal.

Every single scene for the first half of the episode had World Cup references chucked in, with Linda Carter (Kellie Bright) working on an important match day plan (double shifts for Janine, unlucky), and Kathy Beale (Gillian Taylforth) ordering in incorrectly spelled England cupcakes.

Rocky, um, treated us to a version of ‘Football’s Coming Home’ (Picture: BBC)

Brian Conley was then along, right on cue, to up the ante a bit, looking forward to his lad’s day out in his Kevin Keegan shirt to meet up with Harry Redknapp.

Dotty and Bobby (Milly Zero and Clay Milner Russell) were as exasperated as the rest of us when he replied to the notion of Kathy joining him with: ‘it’s not a spa day’.

As the emotion of the episode started to take hold, Billy Mitchell (Perry Fenwick) was struggling with the prospect of taking Lola Pearce (Danielle Harold) to her first radiotherapy session.

In aching scenes played beautifully by Perry, he was comforted by Freddie Slater (Bobby Brazier) – who tried to lighten the mood by avoiding the elephant in the market and instead speculating on the tactics England should deploy.

Itâs all kicking off at The Queen Vic. Tomorrow at 7:30 on #EastEnders. pic.twitter.com/dMLA6MxKBV

Which was effectively getting the ball in the net, which seems like a solid strategy to be fair.

We get it, EastEnders, the World Cup is on.

Speaking of which, the show …read more

Iran players sang along having stood in silence on Monday (Picture: Getty) Iran players sung their national anthem ahead of their World Cup clash against Wales to a chorus of boos from their own support. Prior to their group opener against England on Monday, the Iranian team stood in silence as their anthem was played […]