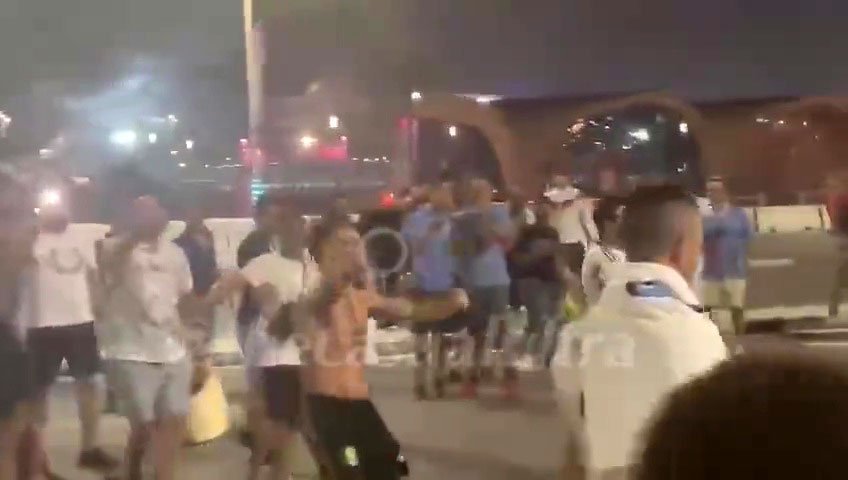 Footage shows fans of the two South American teams taunting and pushing each other.

Argentina can be heard shouting ‘f**k Messi’, while men are seen pushing and gesturing towards each other.

Many are dressed in their team’s colours while others have gone shirtless in the Middle Eastern heat.

People can be seen getting medical treatment in other clips.

The clash took place on Wednesday at the Al Bidda Park in Doha – a fan area designed to encourage supporters mixing and watching the football together.

The rival teams, Mexico and Argentina, are set to play in Group C on Saturday.

Some 80,000 fans are expected to descend on Lusail Stadium for the game.

The winner was so thrilled about the shocking victory it declared a public holiday for its 35 million citizens.

Lionel Messi, 35, scored the first goal for Argentina in what is likely to be his last chance to win the World Cup before he retires.

But Saudi Arabia made an incredible comeback in one of the greatest upsets in the tournament’s history.

Saudi Arabia is taking the day off to celebrate properly (Picture: Getty)

‘Where is Messi?’ one Saudi fan said in a video posted by ESPN, using his hands to mimic the use of a pair of binoculars.

Ronaldo and Messi are commonly considered the best two current players in the world and their achievements are frequently compared, even this late into their respective careers.

Fancy it? (Picture: Solent News & Photo Agency) Hate choosing between sweet or savoury snacks? Well, this woman’s ‘bar of crisps’ could be for you. Maria Antoniou, a chocolatier from Chelmsford, has earned more than 700,000 views on TikTok for the unique product she says was born in lockdown. Now, she’s in with a chance […]

How to watch World Cup 2022 games in the UK: Full TV channel guide

It’s wall-to-wall coverage for fans watching back home (Picture: Jean Catuffe/Getty Images) Football fans are officially in dreamland – all 64 games at the FIFA World Cup 2022 in Qatar will be shown live on TV in the UK. As is the case for major tournaments, the BBC and ITV are sharing coverage of matches […]

Is it worth the hype? (Picture: Rightmove) Consider yourself ‘special’ and ‘unique’? Well, you might have found your dream home. A ‘very unique home’ has hit the market in Bristol, with the owner looking to sell to a very specific type of person. The listing – written by the owner themselves – says that the […]