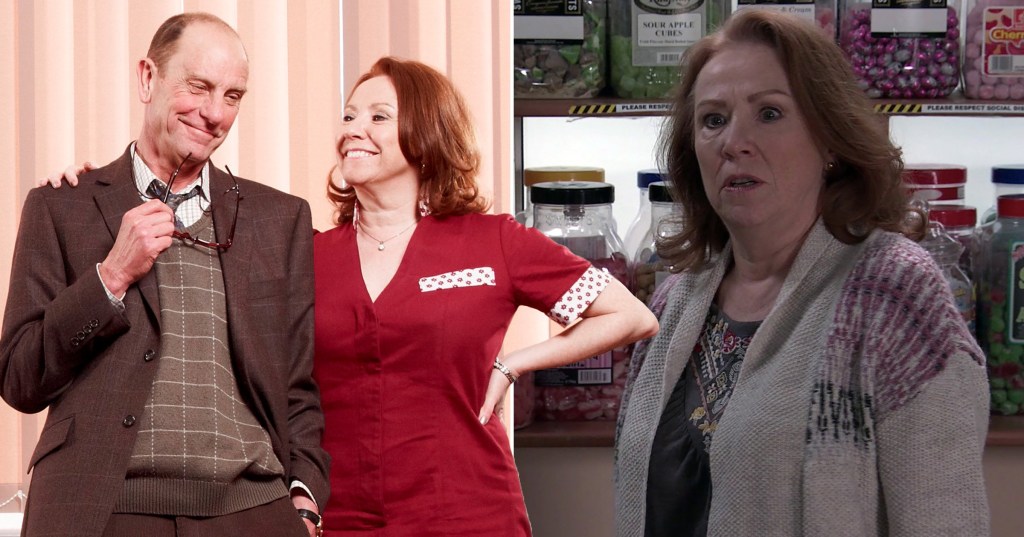 Melanie Hill has quit Corrie after 7 years, could she be returning to the new Waterloo Road series? (Pictures: BBC/REX)

The actress, 60, made the ‘extremely emotional’ decision to walk away from Corrie, after ‘thinking about the future’ post-Covid.

Melanie admitted: ‘It’s not been an easy thing to decide.

‘My family has been important but the pandemic has made a lot of people think about the future.’

She added to The Mirror: ‘It has changed a lot of things in my head. You’ve just got to see what’s important to you.’

Melanie confessed she ‘absolutely’ loves her Corrie co-stars but the pandemic has made her think about her family ‘a lot’ and re-evaluate her ‘priorities’.

The Sunderland-actress rushed home two weeks ago to look after her 88-year-old mother, and is now looking for roles that could allow her to have more time with family, ‘because soaps are pretty relentless,’ she shared.

‘You never stop, really, and you’re always on call,’ she added.

Although she is stepping away from Corrie, Melanie revealed that her character won’t be killed off, so the ‘door is open’ for her to return in the future.

Melanie admitted it was an ‘extremely emotional’ decision to quit (Picture: ITV)

Speaking about Melanie taking time away, John Whiston, head of ITV in the north, added to The Mirror: ‘We’re sad Melanie is taking time away – she is such a skilled actress that she can deliver sadness and laughter, drama and comedy often in the same scene. We will all miss her hugely.’

The news comes after the announcement earlier this year that Waterloo Road was returning.

The 2022 cast of Waterloo Road will come to BBC later this year! (Picture: BBC/Wall To Wall/Paul Husband)

Melanie’s Corrie co-stars Ryan Clayton, Kym Marsh and Rachel Leskovac will all join the new Waterloo Road cast, with Ryan playing the role of ‘Mike’, Kym cast as Nicky Walters and Rachel as the Head of English, Coral Walker.

Aggie set to cheat on Ed with her new boss in Corrie?

The British Soap Awards 2022: EastEnders and Emmerdale lead as full shortlist is revealed

Melanie was a member of the original Waterloo Road series, which aired from 2006, playing dinner lady and head of the school house Maggie Budgen from 2012 before her time on Corrie from 2015.

Maggie was married to grumpy English teacher Grantly Budgen (played by Philip Martin Brown), who sadly died in the series after a tragic storyline where he went through kidney failure.

Prince William said it was important to him and Kate Middleton to be at the opening of the Glade of Light memorial (Picture: Samir Hussein/WireImage) The Duke of Cambridge spoke of living with his own grief as he told families of those murdered in the Manchester Arena bombing that their lost loved ones would ‘never […]

If Snapchat is no longer for you, it’s possible to delete your account permanently. (Pictures: Snapchat/Mateusz Slodkowski/SOPA Images/LightRocket via Getty) It’s probably safe to say that, in the ebb and flow of social media, many users fall in and out of love with different apps all the time, and Snapchat is no different. However, plenty […]

Eurovision 2022: When is the final, where is it being held, and how can you watch in the UK?

This year, the UK will be pinning its hopes on TikTok star Sam Ryder as their 2022 Eurovision entry (Picture: REUTERS/Yara Nardi REFILE) Eurovision – the glittery and glamorous all-singing, all-dancing competition – is now underway. Britain has yet another chance to go for gold after the UK unluckily placed last two years in a […]