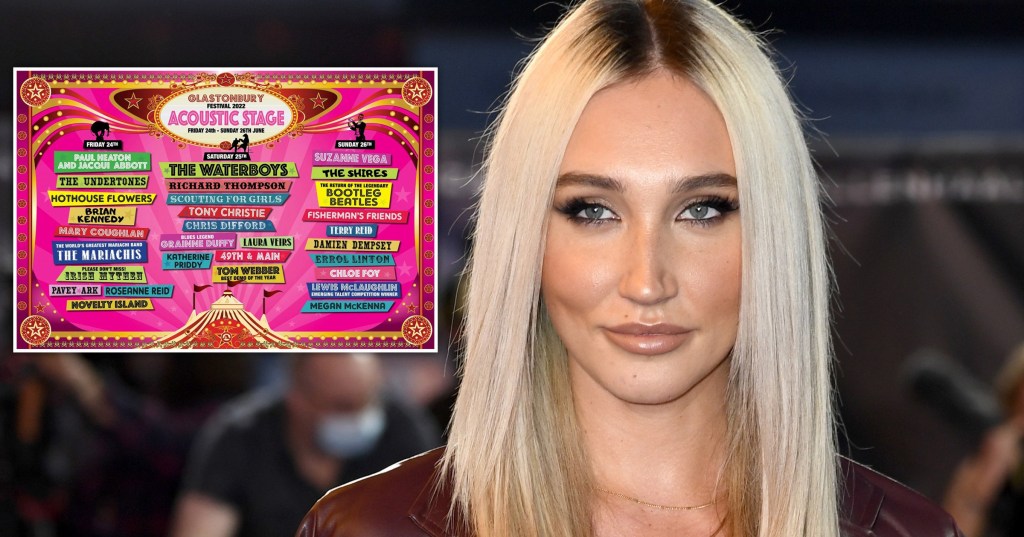 Megan McKenna has confirmed that she will be playing at Glastonbury this year, making her the first ever X Factor winner to do so.

The former Towie star described her impending performance at the festival as ‘the biggest moment’ of her life as she shared a clip which read: ‘I am playing 2022 Glastonbury Festival of contemporary performing arts’.

She added the caption: ‘This is possibly THE biggest moment of my life yet. I am playing GLASTONBURY! 🌈 I’m literally crying with happiness I have worked so hard to finally get here 😭😭😭 Baby Megan would be so proud! SEE YOU ALL THERE SUNDAY 26th JUNE! 🌻🦋🦄.’

The singer was congratulated by friends and fans, including former Towie co-star Ferne McCann who wrote: ‘This is insane so proud of you.’

Megan is the first X Factor winner to perform at the festival, having won the celebrity edition back in 2019 – she is now making a name for herself in the country pop scene.

James Arthur, who took home the X Factor crown in 2012, previously accused the music festival of ‘snobbery’ after he failed to make the line-up in 2019.

Appearing on This Morning, he said: ‘I would love to be considered I guess credible enough to perform at these things. I think I was made to perform at Glastonbury and these big festivals. I am a musician.

‘I have worked very hard, it’s been seven years since The X Factor and it’s amazing that I have managed to sustain a career.

‘There is a little bit of snobbery attached to being from a reality TV show and I think maybe we get overlooked for things like that. For me, it sucks because I believe I am made for those kind of things.’

Having famously starred on reality TV shows including Celebrity Big Brother and Ex on the Beach, Megan recently opened up about the struggles of transitioning from reality TV to a music career, and feels she’s had to work ‘twice as hard’ as other new artists.

‘I feel like The X Factor was a brilliant platform to kind of show people that I’m more than just [reality] TV,’ Megan told Metro.co.uk ahead of her gigs in London and Manchester last year.

‘Going to Nashville and working there a little while has opened my eyes to people over there. Everyone’s just so loving and wants to be a performer and I just feel like I fit in over there so …read more

Old Kindles are set to lose access to the Amazon store (Picture: PA) If you’re still using a pre-2012 Amazon Kindle for your nighttime reading, you may want to consider upgrading. In an email to customers seen by GoodEReader, Amazon says it will be disabling access to the Kindle Store. That means any Kindle up […]

Emmerdale spoilers: Sarah gets through to stalker Noah as he faces prison?

Another explosive week awaits in the Dales (Picture: ITV) With sudden departures, the discovery of some truths and the outcome of a trial all on the cards, Emmerdale is not to be missed next week. Faith Dingle (Sally Dexter) is stunned when Moira (Natalie J Robb) makes a revelation about Cain (Jeff Hordley), while Vanessa […]