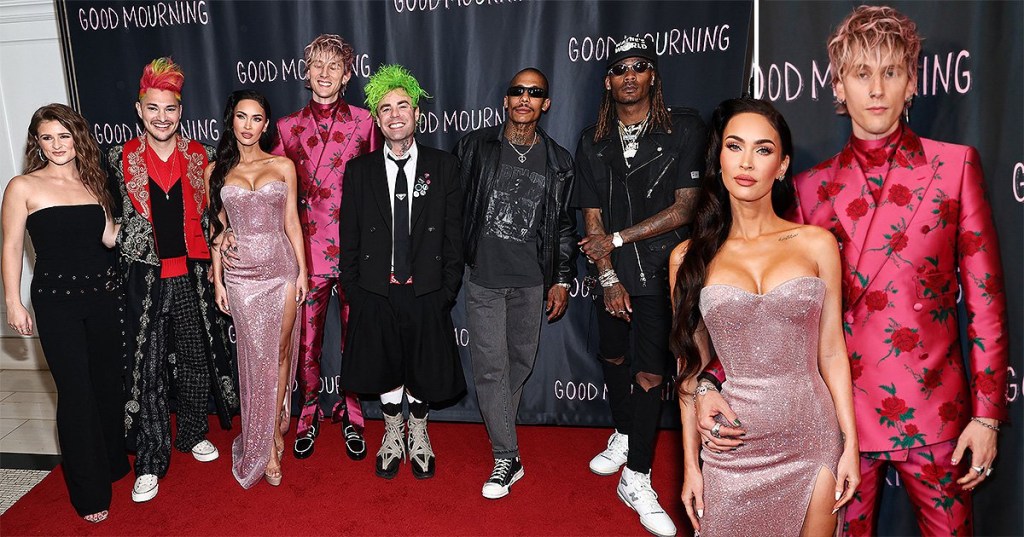 Megan Fox channeled her former style for her latest movie premiere as she took to the red carpet with fiancé Machine Gun Kelly.

The actress, 35, will star alongside MGK, 31 , whose real name is Colson Baker, in Good Mourning With A U, the stoner comedy created by him and best friend Mod Sun, 35.

Megan may have done a complete style overhaul and rocked some outlandish outfits since meeting the musician, but she was back to rocking classic Hollywood glam at the premiere in West Hollywood.

The mum-of-three channeled the look she is best known for, and opted for a pink glittery strapless dress with a thigh-high split and platform heels, with her long dark hair styled in sleek waves, choosing not to add any jewellery to the look.

MGK also chose pink for his red carpet outfit, wearing a silk suit with a rose pattern and a matching turtleneck underneath, with black and white shoes completing the look.

The rapper and pop punk star was also seen posing with Mod, who wore a black suit with cropped trousers and Rick Owens boots with elaborate lacing.

Megan went back to her former style of dressing for the premiere (Picture: Axelle/Bauer-Griffin/FilmMagic)

The pair posed with Mod Sun (fourth left) and the rest of the cast and crew (Picture: Kevork Djansezian/Getty Images)

Mod recently celebrated getting engaged to fiancée Avril Lavigne after he promised to her in Paris, with MGK seen at their engagement party, which also had a French theme.

The pair teamed up on their first feature film, which also stars Pete Davidson, Whitney Cummings, Dove Cameron and Becky G among its host of names.

The film follows actor London Clash, played by MGK, who is forced to choose between the biggest role of his life and winning back his girlfriend, played by Becky G.

Johnny Depp trial: Who is Ellen Barkin as she prepares to testify?

He enlists his group of stoner pals and his ex, played by Megan, to help him win back the love of his life.

Good Mourning With a U is set for release in the US on May 20.

Rihanna and A$AP Rocky’s baby has been born! (Picture: Jeff Spicer/BFC/Getty Images) Rihanna and A$AP Rocky are celebrating the birth of their first child together, it has been claimed. We Found Love singer welcomed a baby boy on May 13, according to reports. However, his name has not been confirmed by the new parents. The […]

Was this really a good idea? (pic: Activision) The Operation Monarch event is not going down well with either streamers or regular players, with complaints that Fortnite does it better. Fortnite has had so many celebrity and movie cameos over the years it no longer matters how well a character fits the style of game. […]