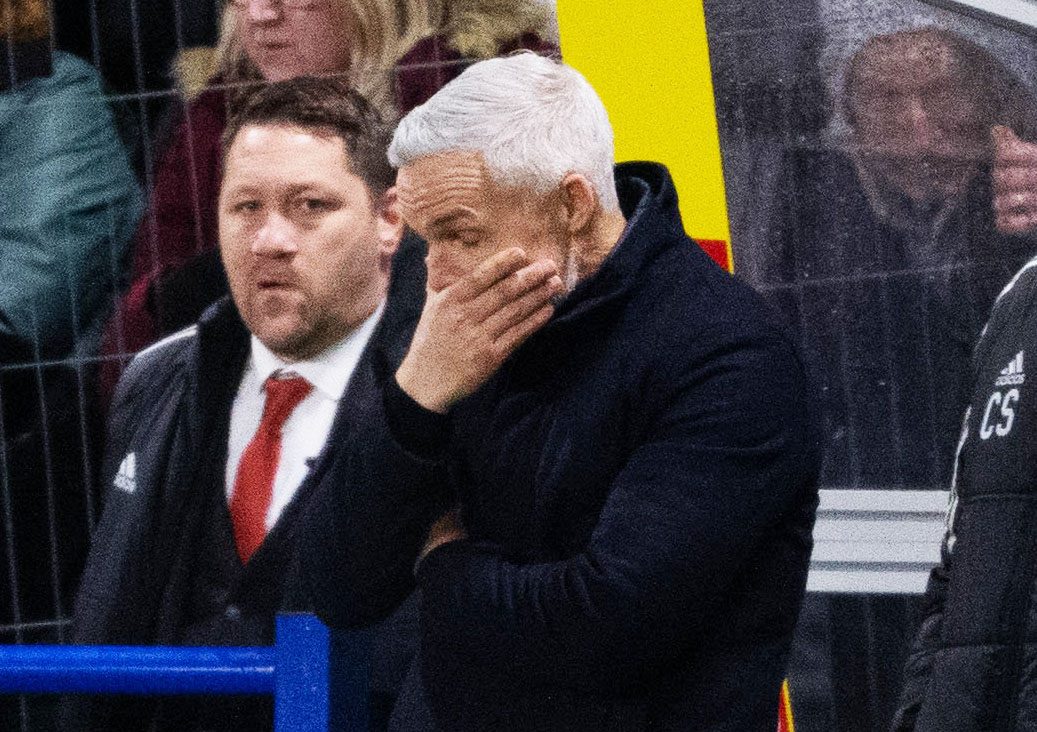 Jim Goodwin can’t look as Darvel stun his Dons side in the Scottish Cup (Picture: SNS)

Former Aberdeen great Alex McLeish expressed sympathy for embattled Dons manager Jim Goodwin after he presided over the worst result in the club’s history – but admitted the cup loss to Darvel has ‘dragged the club back a mile’.

The 41-year-old Irishman’s job appears to be in jeopardy following Monday’s 1-0 Scottish Cup fourth-round defeat away to sixth-tier side Darvel.

And former Rangers, Birmingham and Scotland manager McLeish told talkSPORT: ‘Oh God, it’s a shame. Listen, I’ve been there as a manager and I know what it feels like. He must be feeling as low as a manager can.’

Despite his reluctance to put the boot into Goodwin or his old club, McLeish, who played in the Dons’ famous Cup Winners’ Cup triumph in 1983, conceded the result against Darvel was a huge setback for the Reds.

‘I don’t want to be associated with massive headlines against my old club,’ he said.
‘I feel for the club and (owner) Dave Cormack is a good mate. I know he’s seriously trying to get them to a better level, but I’m afraid that one has dragged them back a mile.’

Aberdeen owner Cormack held talks with Goodwin yesterday in the wake of the Darvel humiliation. The Dons boss was already under severe pressure following a run of five defeats in seven league games, including last Wednesday’s 5-0 thrashing at Hearts, since the World Cup break.

However, Goodwin was set to take training when the players reported for duty yesterday.

Goodwin remained defiant after the defeat in Ayrshire, saying: ‘I do believe I can turn it around. I have confidence in the squad.

‘To concede five against Hearts and then to get turned over by a junior team is embarrassing and humiliating and we can only apologise.

‘We have to stick together and we have to keep fighting, work hard and put on a good display against Hibs on Saturday.’

Graham Potter is keen for Chelsea to sign Moises Caicedo from Brighton (Picture: Getty) Chelsea are set to test Brighton’s resolve by making an improved bid for Moises Caicedo. Backed by new owner Todd Boehly, the Blues have embarked on an unprecedented January spree which saw Noni Madueke become their sixth signing this month already […]

Boy, 14, dies after being hit by two cars

The incident took place in Laughton Road, Thurcroft (Picture: Google Maps) A teenage boy has died after he was struck by two cars in South Yorkshire. Emergency services were called to Laughton Road in Thurcroft at 6.23pm last night. Police say a grey Honda CR-V was travelling towards the village when it collided with the […]

Shania Twain, is that actually you though? (Picture: Getty) She’s one of the most popular music stars in the world, but Shania Twain managed to make people do a double-take at a pre-Grammys party this week. That’s right – Shania really impressed us all, much, with her bombshell makeover at the event in Los Angeles […]