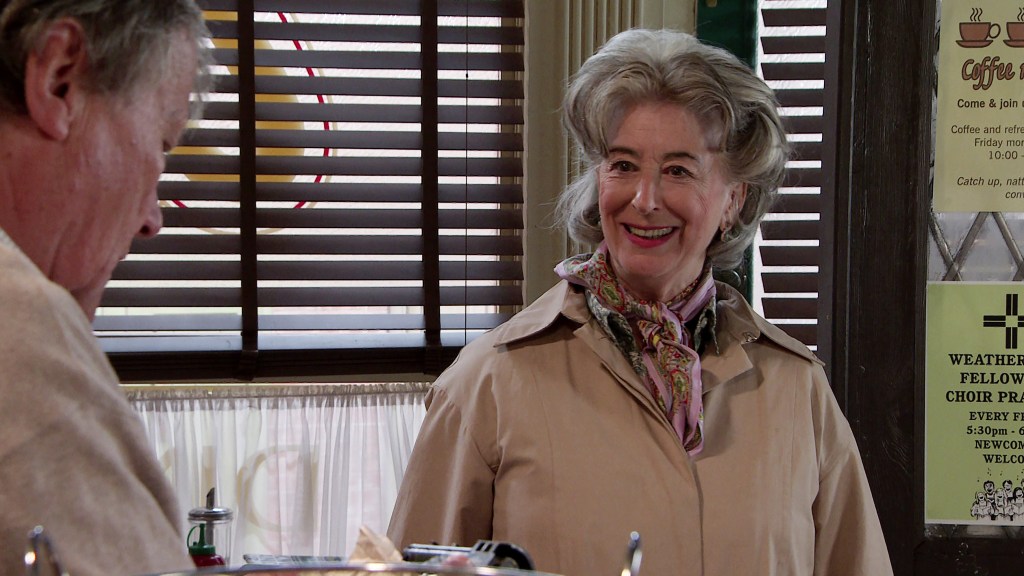 Maureen Lipman will be taking a break from Coronation Street in order to take on a new role.

The actress, who plays Evelyn Plummer in the ITV soap, will be taking one woman show Rose to the West End later this year.

Rose tells the story of a woman who travels from Nazi-occupied Europe in order to begin a new life in America.

The play in question previously had sell-out runs at Hope Mill Theatre in Manchester and The Park Theatre, London.

A source told The Sun that, while Maureen will be departing Corrie for Rose, she will be retuning to the soap.

‘Maureen will be taking a short break from the cobbles to star in the play’, the insider said, ‘but she will be back.’

Maureen has become a fan-favourite since joining Corrie in 2018 as no-nonsense Evelyn, the grandmother of Tyrone Dobbs (Alan Halsall).

Evelyn has been at the centre of a number of big storylines ever since, and even featured on-screen during the latest outing of the serial drama, when she began to suspect that Tyrone was cheating on Fiz Stape (Jennie McAlpine) again.

Things, however, were not what she thought.

Alya dies in Coronation Street as she is stabbed in horror attack tonight?

The lady that Ty was caught with was none other than Fiz in a wig, who was hoping to spice up their marriage after some advice from Sally Metcalfe (Sally Dynevor).

Evelyn was stunned by the development – as were the viewers at home!

Coronation Street airs Mondays, Wednesdays and Fridays at 8pm on ITV1 and ITVX.

Emma made a heartbreaking discovery about her daughter – just hours after meeting with her for the first time in decades (Picture: BBC) Emma Harding (Patsy Kensit) was rocked to the core in EastEnders as she discovered that Lola Pearce (Danielle Harold) is terminally ill. The newcomer, who is Lola’s biological mum, made the discovery […]

Mesut Hancer was photographed holding the hand of his 15-year-old daughter Irmak (Picture: AFP) A grief-stricken father has been pictured grasping the hand of his teenage daughter crushed to death after earthquakes tore through Turkey and Syria. Crouching alone in the rubble, Mesut Hancer kept hold of Irmak, 15, trapped beneath a slab of concrete […]