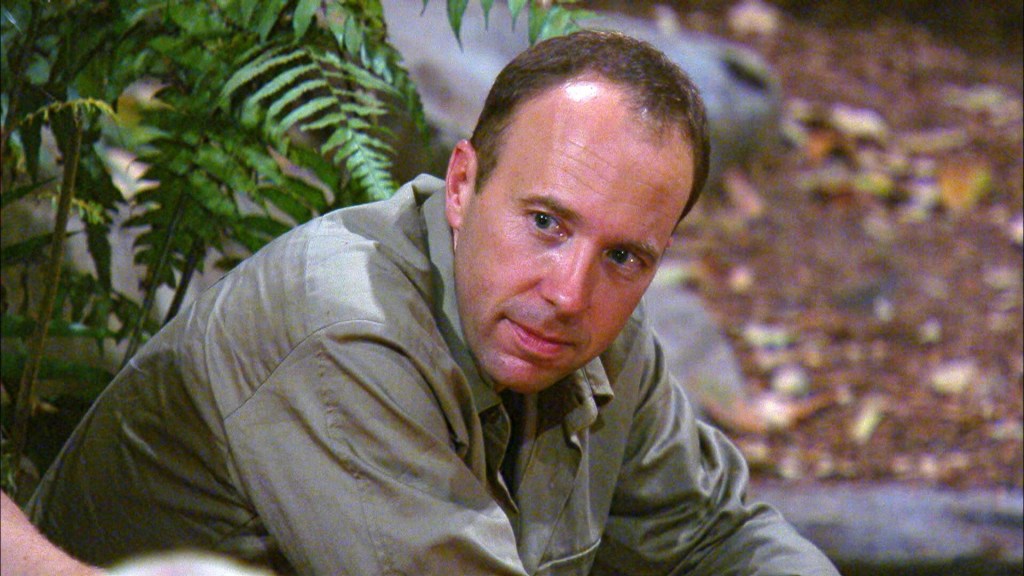 The former health secretary was asked for the scoop on what really happens in Cabinet reshuffles (Picture: ITV/Shutterstock)

Matt Hancock has admitted ministers ‘aren’t experts’ in a politics-filled discussion on I’m A Celebrity…Get Me Out of Here!

The former health secretary’s participation in the show has led to waves of backlash both inside the camp and at home.

Ahead of his jungle stint, he had vowed to use it as an opportunity to raise awareness of dyslexia – which he finally did earlier this week.

In a discussion with radio presenter Chris Moyles, Mr Hancock was asked for the real scoop on what happens in Cabinet reshuffles.

Moyles asked Matt: ‘If you’re an MP and you’re tootling along doing your MP job, how does it work? Do you get a phone call saying, “Hi, would you like to be Minister of Transport?”

‘It’s reshuffle day and the first thing the Prime Minister does is call the people who he or she is going to fire and invites them into the office in the House of Commons.

‘That way the cameras can’t see them coming and going. Face-to-face. These are very sensitive conversations. Then they go into Downing Street and they call people in in order of seniority. They have a whiteboard with all of the cabinet positions on it and they go from senior down.

‘Sometimes people say, “No, I don’t want to be Defence Secretary, I’d take Transport” and it is literally a reshuffle as in they’re moving names across this whiteboard.’

The pair then discussed if that essentially meant politicians ‘two jobs’ and ‘more money’, to which Mr Hancock confirmed.

The former health secretary went on to admit that the job of a minister was ‘not to be a subject matter expert’.

He said: ‘Of course, you need to get to grips with the subject matter, but that is only half the job.

Matt Hancock’s participation in I’m A Celeb has been severely criticised (Picture: ITV/Shutterstock)

‘There’s a load of transferable skills – handling parliament, communicating with the public, taking decisions effectively – and then you have the subject matter experts who advise you on it all.

‘Nobody is a specialist in the whole health service, literally nobody.
Even the Chief Executive of the Health Service.’

Gareth Southgate chose to leave a couple of his more creative players on the bench (Picture: Getty Images) Gareth Southgate missed two tricks during England’s goalless draw with USA on Friday in Qatar, by leaving Phil Foden and Trent Alexander-Arnold on the bench, believes Gary Neville. It was not a great performance from England as […]

The report comes after the murder of Logan Mwangi, 5, last year. (Picture: PA) A report into the murder of a five-year-old boy has identified what it believes may be ‘systemic’ issues with safeguarding children. It includes a failure to report injuries he suffered months before his death. Logan Mwangi was killed in his home […]

Todd Boehly is desperate to beat off competition from the likes of Liverpool and Manchester United to sign Jude Bellingham for Chelsea (Picture: Getty) Chelsea owner Todd Boehly is ‘obsessed’ with signing England World Cup star Jude Bellingham for Chelsea. The 19-year-old has enhanced his reputation as one of the most exciting teenage talents in […]