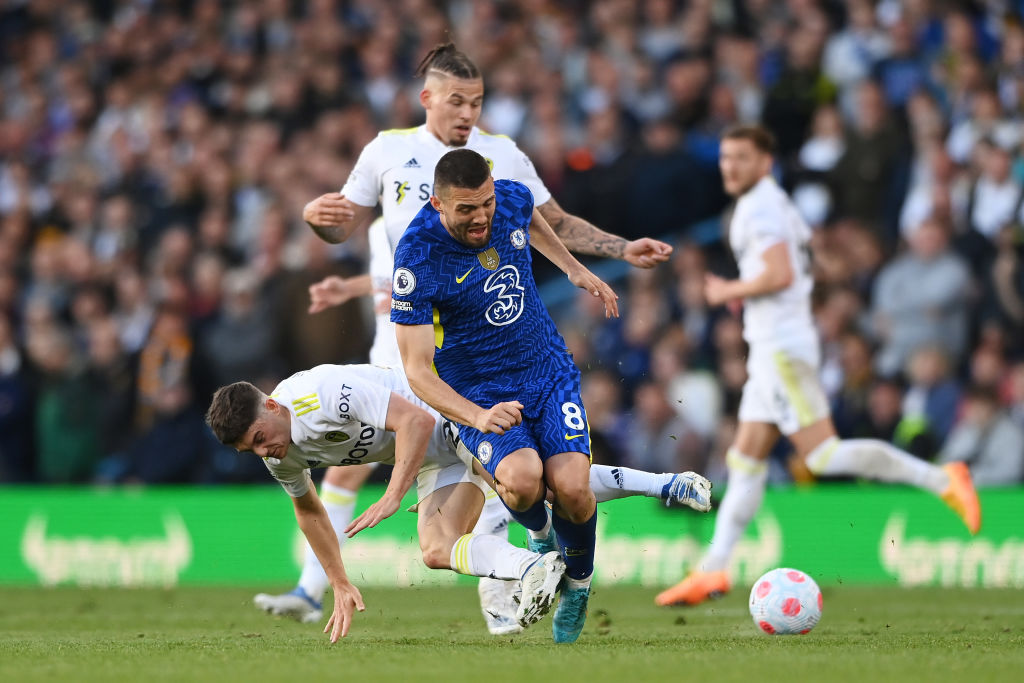 Mateo Kovacic was the victim of a terrible challenge from Dan James (Picture: Getty Images)

Kovacic was on the wrong end of a reckless challenge from Leeds forward Dan James at Elland Road, which saw the former Manchester United man shown a straight red card.

The 28-year-old attempted to play on but was soon forced out of the game in West Yorkshire, which Chelsea went on to win 3-0.

The good result was spoiled by the injury to the Croatian, though, with Tuchel saying: ‘It looks swollen and painful. It’s the same ankle he had injured already. It doesn’t look good.’

On the midfielder’s chances of facing Liverpool at Wembley on Saturday, the German manager added: ‘I tell you not as a coach and not as an expert, but for me it is very unlikely.

Kovacic had his foot in ice after limping off (Picture: Getty Images)

‘I see him – first of all, if Mateo goes out, he never goes out and he played in the semi-final of the FA Cup with the same injury and tried to play another 15 minutes, which was almost impossible. Now he went out. It was a swollen ankle and he is in a lot of pain.

‘For me, I am not a doctor and we need to wait for the examinations. It is very unlikely he can play. It is absolutely bad news for us on a perfect evening.’

Chelsea have plenty of options in midfield if Kovacic does not make it back for the weekend, with Ruben Loftus-Cheek replacing the Croatian from the substitute’s bench, while Ross Barkley was an unused sub at Leeds.

N’Golo Kante missed the trip to Leeds through injury but is expected to be available for the weekend.

‘We can still mix it up!’ – Joshua Buatsi hopeful Anthony Yarde fight can follow south London derby against Craig Richards

Yarde vs Buatsi another compelling fight at light-heavyweight (Picture: Getty/Matchroom) Joshua Buatsi is confident his clash against Craig Richards will be the first of many all-British light-heavyweight showdowns to take place soon with a meeting with Anthony Yarde still in his sights. Buatsi and Richards meet in what should be an enthralling south east London […]

Red flags to look out for in a new job contract

You need to read the small print (Picture: Getty/Metro.co.uk) You’ve made it through the job interview process. You’ve got the job, popped the champagne, the only thing left to do is sign the contract. However – before you get too excited about your shiny new role, you need to make sure you really read that […]