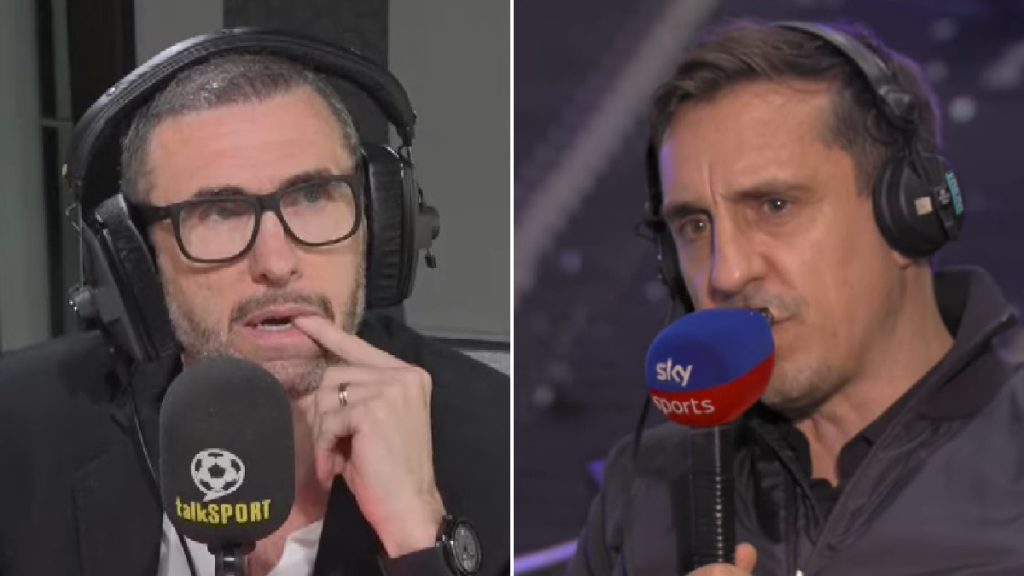 Neville was on co-commentary duty for Sky Sports as the Gunners imploded and gifted their fiercest rivals a victory which saw the momentum swing in favour of Spurs in the race for Champions League qualification.

Arsenal manager Mikel Arteta was left deeply unhappy with the performance of referee Paul Tierney after he awarded the home side a soft first half penalty and sending Rob Holding off shortly afterwards for two bookable offences in the space of seven minutes.

Cedric Soares was penalised for a foul on Son Heung-min in the north London derby (Picture: Sky Sports)

Neville felt Tierney was correct to penalise Cedric Soares for a needless push on on Son Heung-min.

Keown, however, felt the Manchester United legend was far to quick with his assessment of the decision, particularly when compared with the way in which he skirted over Ben Davies’ cynical challenge on Bukayo Saka which prevented the Arsenal winger from having a clear run on goal.

‘If you look at Ben Davies it’s like a pincer tackle and he tries to grab Saka away and then nothing becomes of it,’ Keown told talkSPORT.

‘Sky didn’t really want to make much of that and maybe that was the commentary team going one way rather than the other.

‘Nobody really referred to it. Last night I thought there were quite a lot of replays every time an Arsenal player made a foul.

‘Suddenly you don’t really see too many replays when there was a Spurs player that brought one down. That was a key incident Saka was away on goal there.

I think Gary Neville was very quick to say that was a penalty in real time. If he was a full-back, in real time he would have been unhappy if it was given against him.

‘I’m saying he was very quick to say that was a penalty.’

Kylian Mbappe has rejected Real Madrid and will extend his contract at PSG (Picture: Getty) Javier Tebas, the president of La Liga, has branded Paris Saint-Germain an ‘insult to football’ after Kylian Mbappe rejected the opportunity to sign for Real Madrid. The France international’s contract was due to expire next month and he appeared destined […]

Hendrix’s joy turns to sadness (Picture: Channel 5 / Fremantle) An ecstatic Hendrix (Ben Turland) gets the lifeline he needs, but things soon take a shocking turn in Neighbours. Hendrix is on a high after receiving the news he has a transplant. He’s filled to the eyeballs with gratitude and desperately wants to thank his […]

A Sainsbury’s store in the West Midlands has been closed amid reports of ‘people collapsing’. Six people have been treated for ‘minor respiratory symptoms’ at the scene in Longbridge. The nature of the incident is currently unknown. This is a breaking news story, more to follow soon… Check back shortly for further updates. Got a […]