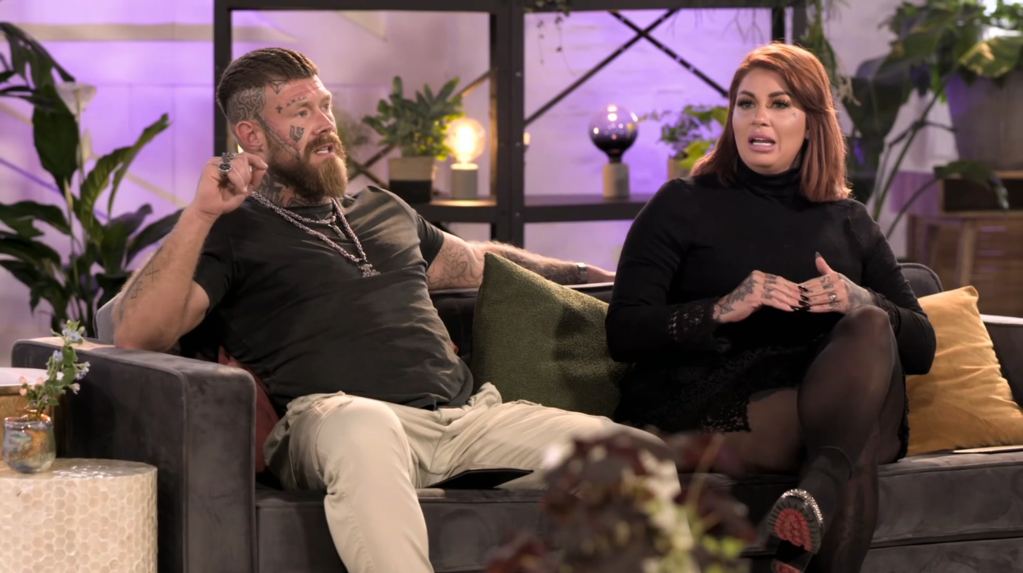 Matt said some of Gemma’s remarks had made him feel ‘uncomfortable’ (Picture: E4)

Several fans of the show were astounded by what they heard apparently went down when the couple were out at dinner.

Another viewer was left confused over why the experts ‘let the restaurant scenario slide’.

In a statement shared on her Instagram Story after the episode, Gemma claimed it was ‘one rule for her’ and another for Matt, writing: ‘We went for dinner with our camera crew and he was bantering he got funny with me when I said it’s okay for you to make those jokes but not for me he commented on my body language being different.’

Gemma cried as she explained that she doesn’t feel she should have to change her personality (Picture: E4)

She continued: ‘I made the jokes I made and he made his. He flipped his chair back and stormed out of the restaurant very angry.’

In a video recently shared on social media, Gemma said that the ‘the storylines they have created of me, ruins lives’.

‘It’s not okay. I have two children and a business. And I think if you asked any of the team who worked on Married At First Sight they would say I was one of the nicest people that worked on it. This is unacceptable,’ she said, before making claims about comments Matt supposedly said to her on their wedding day.

‘I think if you knew some of the things Matt said on the wedding day, which I don’t know why they haven’t been shown, maybe because they were actually worse than mine…’ she said.

Married At First Sight UK next airs on Monday at 9pm on E4 and All 4.

Stacey Solomon fears she won’t be able to pay energy bills on £1,200,000 Pickle Cottage amid cost of living crisis

Stacey is worried the cottage might become beyond the couple’s means (Picture: Instagram) Stacey Solomon is concerned that she might not be able to afford to pay the energy bills on her beloved Pickle Cottage amid the cost of living crisis. The former X Factor star shares the sprawling £1.2million home with new husband Joe […]

The former Arsenal boss was bewildered by United’s first-half showing (Pictures: Getty / beIN) Arsene Wenger has criticised Manchester United’s first-half performance in their heavy 6-3 defeat against Manchester City in Sunday’s one-sided derby, singling out two players in particular. The Red Devils shipped four goals in the first half before Phil Foden and Erling […]

The boy was left with bite marks on his cheek from the rat attack (Picture: Liverpool Echo) A two-year-old boy was attacked by a rat while sleeping in his bed in Liverpool, leaving blood all over his pillow. His mum, who was breastfeeding her newborn baby at the time, suddenly heard screams coming from another […]