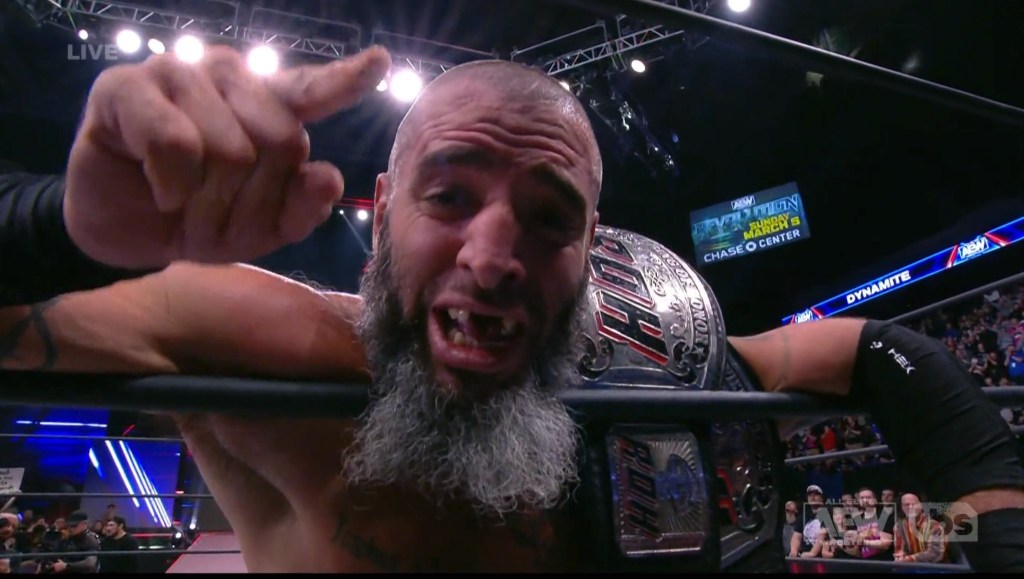 The Ring of Honor wrestler came out with his and his sibling’s tag team championship belts during Wednesday night’s episode and faced off against their longtime friend and rival Jay Lethal in an emotionally charged match.

Last week, Briscoe, real name Jamin Pugh, died aged 38 in a car crash which left both his young daughters injured, and the wrestling world has been in mourning.

On Wednesday, Tony Khan’s All Elite Wrestling promotion marked what would have been Briscoe’s 39th birthday in a fitting way.

A video package aired during the night highlighting his wrestling career and life as a father, while the company had announced Mark would face Lethal in a tribute match to close the show.

Lethal was fighting back the tears before, during and after the match, with fans both at home and in the arena also left crying over their collective loss.

Mark showed incredible courage coming out and performing just over a week after his brother’s death, while the match was also his own AEW debut.

He won the match with his late sibling’s signature Jay Driver and pinned Lethal before the entire roster emptied onto the stage.

The show closed on a powerful image, with Mark holding his and his brother’s titles above his head with his fellow wrestlers showing their respect behind him.

On last week’s Dynamite, wrestlers paid tribute to Briscoe by wearing black armbands, while the Young Bucks hit one of the Briscoe Brothers’ signature moves during their match.

Similarly, wrestlers on WWE shows Raw and SmackDown – many of whom worked with the Briscoes earlier in their careers – also wore armbands as a mark of respect to their late friend.

AEW Dynamite airs Wednesday nights at 1am on Fite TV.

Do we spy a new romance in the works? (Picture: Rex/ITV) After just a few days in the Love Island 2023 villa, Zara Lackenby-Brown has already set her sights on a potential new romance. Following her entrance on the winter series, the 25-year-old quickly struck up a connection with Tom Clare, going head-to-head with 27-year-old […]

To view this video please enable JavaScript, and consider upgrading to a web browser that supports HTML5 video This is the moment when cabin crew try in vain to break up a mass brawl over a window seat on a plane in Brazil. The row erupted between two families on a Gol Airlines flight bound […]

Jos Buttler is excited by Jofra Archer’s injury return (Pictures: Getty) Jos Buttler insists he is ‘excited’ by Jofra Archer’s comeback as the fast bowler prepares to make his long-awaited return to international cricket in England’s one-day series against South Africa. Archer is set to play for England for the first time in almost two […]