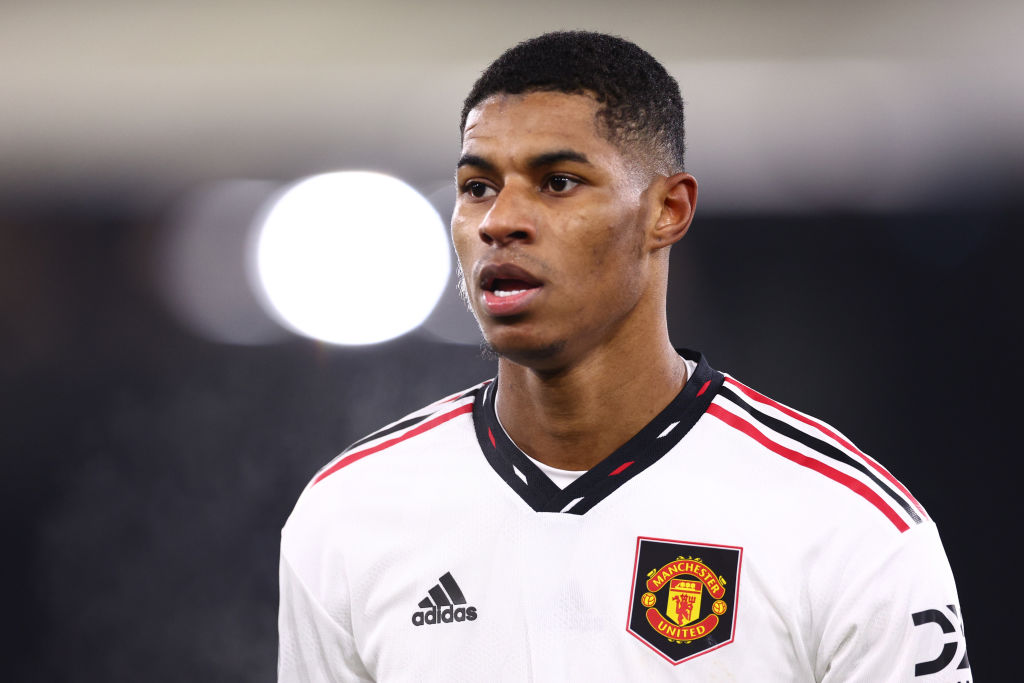 Is Marcus Rashford in the best form of his career? (Photo: Getty)

Rashford has been in fantastic form this season under Erik ten Hag, registering 17 goals and six assists across 28 games in all competitions so far.

The England forward will be hoping to add to those numbers on Wednesday night when United travel to Nottingham Forest for the first leg of their Carabao Cup semi-final.

The Red Devils have looked reborn under Ten Hag this season, mounting an unlikely title challenge whilst remaining in contention for all other trophies, and Rashford has spearheaded this charge.

Many believe the 25-year-old has now become the talisman he was tipped to be all those years ago when he scored a brace on his senior debut aged just 18.

Brown has certainly been impressed, describing Rashford as ‘brilliant’ and even comparing him to Premier League legends Kane and Salah.

‘He [Rashford] is electric when he’s on form. He looks sharp and focused and that’s really helped him,’ the former defender told Casinos En Ligne.

Mo Salah and Harry Kane have scored a combined 439 goals for Liverpool and Tottenham (Photo: Getty)

‘When he’s firing, opponents are scared of him and he is on the same level as Harry Kane and Mo Salah. He just needs to keep it going.

‘Everyone associated with Man United has always known the talent is there and this season Marcus has really began to enjoy his football and understand his capabilities.’

With 110 goals in 331 games, Rasford is already a United icon but he still has some way to go before he hits the heights of his fellow forwards.

Kane’s latest strike against Fulham has made him Tottenham’s joint all-time top goalscorer alongside Jimmy Greaves with 266 goals, and the 29-year-old is also the third highest goal scorer in the Premier League behind only Alan Shearer and Wayne Rooney.

Salah meanwhile has scored 173 goals in just 283 games for Liverpool, helping Jurgen Klopp’s side win every trophy there is to win, including the Premier League and Champions League.

MORE : Erik ten Hag responds to claims of a rift between struggling star Antony and his Manchester United teammates

One dead and several injured after knifeman targets churches in Spain

Declan Rice is expected to leave West Ham this summer (Photo: Getty) Arsenal hero Lauren says Mikel Arteta cannot bank on signing Declan Rice and instead should put his faith in two current Gunners players. Arteta has guided his side to the top of the Premier League table, five points clear of Manchester City with […]