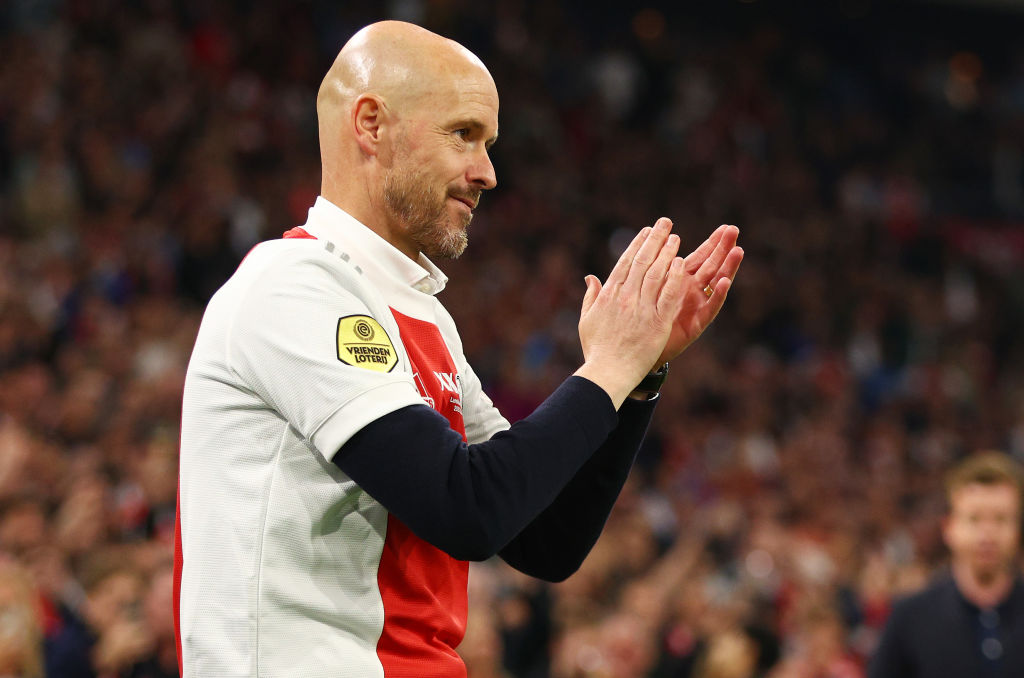 Edwin van der Sar has delivered an emotional message to outgoing Ajax manager Erik ten Hag as the Dutch club wrapped up the Eredivisie title before the boss makes the move to Manchester United.

A dominant 5-0 victory over Heerenveen on Wednesday night secured the Dutch title, the third of Ten Hag’s reign, and it will be the last after he agreed a switch to Old Trafford.

It has been a superb stint in charge of the famous club for the Dutchman, though, with two KNVB Cups and a memorable run to the Champions League semi-finals as well.

Van der Sar, who is a Manchester United hero himself but now works as chief executive at Ajax, has thanked Ten Hag for his superb work and wished him the best as he moves to the Premier League giants.

‘You will leave for a club that is close to my heart. I wish you all the best there. Thank you, Erik ten Hag!’

Manchester United were quick to compliment their next manager as well, hailing his achievements at Ajax over his near-five years in charge.

‘Ten Hag has a reputation as an attack-minded manager and that has certainly been evident with his side this term. Ajax have an impressive goal difference of 79, having scored 96 goals in the league so far.

Ten Hag will bid an emotional farewell to Ajax in their last game of the season on Sunday (Picture: Getty Images)

‘Perhaps even more impressive is the defensive resilience of Ten Hag’s team. In 33 matches, Ajax have conceded a mere 17 goals, 15 fewer than the next nearest team.

‘Off the back of the Dutchman’s latest success, we look forward to welcoming Ten Hag to Old Trafford next season. Congratulations, Erik!’

Eurovision 2022: Fans call for Mika to win after savage performance: ‘How do we vote for Mika?’

Eurovision host Mika gave a spectacular performance at the competition as voting got underway (Picture: AFP) The Eurovision Song Contest 2022 performances might be over, but a new competitor has entered the ring, with fans joking host Mika should win the competition. The Grace Kelly singer is hosting this year’s competition in Turin, and as […]

This year’s Eurovision has now been mired in controversy This year’s Eurovision Song Contest saw a major issue regarding the voting in several countries.  Ukrainian rap group Kalush Orchestra were crowned winners of this year’s competition on Saturday with their hit song Stefania, after being locked in a tight race with the UK’ Sam Ryder […]