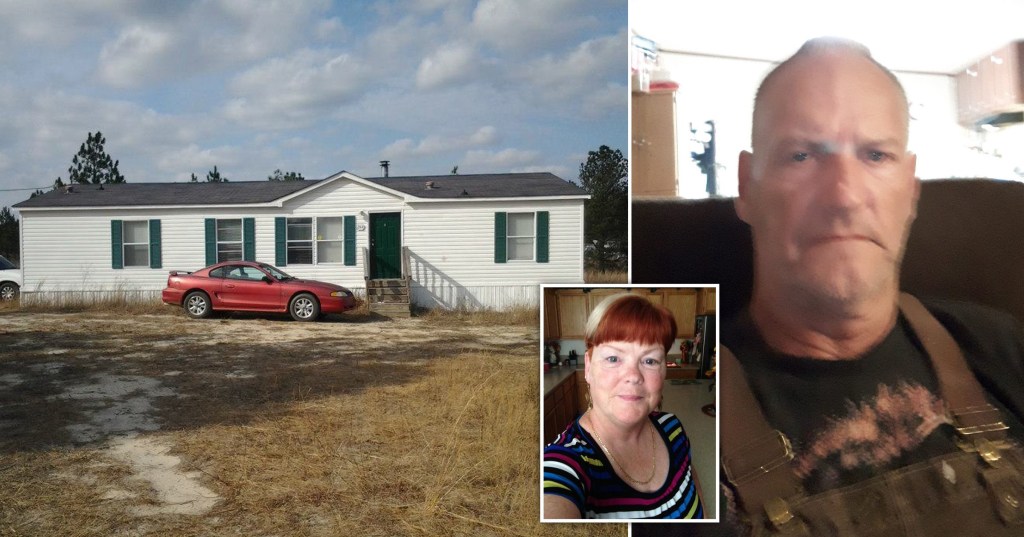 A 60-year-old man who strangled his girlfriend to death had a fatal heart attack while burying her in their backyard.

In a turn of events, first responders were called to the home after neighbors reported seeing an unconscious man lying in the yard, according to Fox 11.

When deputies arrived, they found McKinnon laying in the yard. Medical crews were then called to the home to try and revive him.

As officials investigated McKinnon’s death, they discovered a second body wrapped up in trash bags inside a freshly dug hole in the ground.

Investigators then determined the body buried in the makeshift grave was his girlfriend, Dent, who had lived with him. Officials believe McKinnon had attacked Dent in the home, and an autopsy report concluded she had died by strangulation.

‘Mr McKinnon then bound her and wrapped her in trash bags before putting her in the previously dug pit,’ Sheriff Jody Rowland said.

Neighbors told authorities they had also seen McKinnon digging a hole in his yard the day before.

An autopsy of McKinnon found he had a ‘cardiac event’ while working to cover the grave. He had reportedly been nearly done filling the grave when he set the shovel down, walked away and collapsed, authorities said.

Dent was missing from work at the Mount Vintage golf course on the day she died, prompting calls and texts from concerned coworkers that went unanswered.

Neighbors were shocked by the news and expressed concern about safety.

‘We have no idea and that’s what we’re asking about. At least let us know that it’s something they have in control or don’t have in control,’ Dawn Howanietz told WJBF News. ‘Do we have to make sure everything is locked up tight? Watch our dogs or our animals? We got a farmer back there, too, you know, it’s scary.’

‘We care for you with all our hearts,’ one Instagram user wrote (Picture: Instagram/ suspilne.eurovision) Ukraine’s commentator for Eurovision 2022 broadcast from a bomb shelter as this year’s competition kicked off. On Tuesday evening, the first semi-final of the annual extravaganza took place, with 10 countries – including Ukraine, Switzerland, Iceland and Greece – soaring […]

The couple were found ‘lying in a bloodbath,’ a jury at the Old Bailey was told (Picture: PA/SWNS) A man who stabbed his landlords to death after becoming paranoid about Covid during the first lockdown has been found guilty of double murder. Daniel Briceno Garcia, 40, killed Sonia Butron Calvi, 66, and Edgar Aguilera Daza, […]

Eurovision 2022: Switzerland’s Marius Bear thanks Sam Ryder for comforting him after nil points: ‘He picked me up at my lowest’